After the resignation of Liz Truss, who remained only 44 days in power, three names have emerged in this flash campaign within the Conservative Party: the current Minister for Relations with Parliament Penny Mordaunt, who formalized her candidacy on Friday, Rishi Sunak, the former finance minister who lost in early September to Liz Truss, and ex-Prime Minister Boris Johnson, who resigned in July after a succession of scandals. 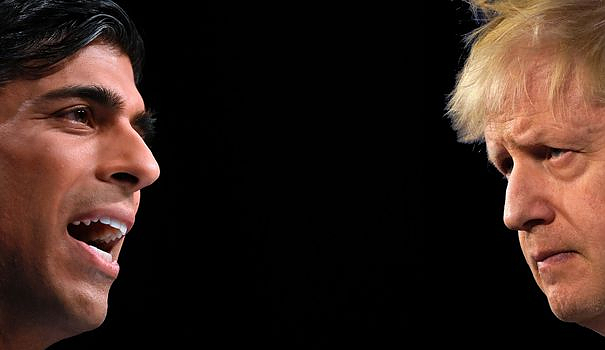 After the resignation of Liz Truss, who remained only 44 days in power, three names have emerged in this flash campaign within the Conservative Party: the current Minister for Relations with Parliament Penny Mordaunt, who formalized her candidacy on Friday, Rishi Sunak, the former finance minister who lost in early September to Liz Truss, and ex-Prime Minister Boris Johnson, who resigned in July after a succession of scandals.

His fight with Rishi Sunak dominates the headlines on Saturday. "Johnson and Sunak lead race as unity hopes fade," headlines The Independent. “Conservative tribes go to war,” writes The Guardian.

Sky News television showed a British Airways plane from the Caribbean landing around 10:15 a.m. (0915GMT) at Gatwick Airport, in which Boris Johnson was traveling.

On Friday evening, an ally of Boris Johnson in Parliament, James Duddridge, had reported an exchange with his "boss".

“He said: We will do it, I am ready”, according to this deputy.

But the ex-Prime Minister, who had left Parliament on July 20, launching "Hasta la vista, baby!", has not yet officially announced his candidacy.

Rishi Sunak, whose resignation from the Johnson government, followed by around sixty others, had led to that of his boss, has not yet entered the race either. He has remained extremely low-key since losing to Liz Truss in early September.

He is the first to have exceeded the threshold of 100 sponsorships required on Friday evening to hope to take the lead of the Conservative Party and therefore win Downing Street.

Candidates have until Monday afternoon to obtain these sponsorships.

The deputies will vote first and, if there are two candidates remaining, the 170,000 party members will have to decide between them by an online vote by October 28.

In the event of a single candidate, he would enter Downing Street directly at the start of the week.

According to the Guido Fawkes site, which closely follows the upheavals of the race, Rishi Sunak had 107 sponsorships on Saturday morning, ahead of Boris Johnson (71) and Penny Mordaunt (25).

Rishi Sunak's allies were campaigning on Saturday morning, omnipresent in the media.

"I'm sure Rishi Sunak will run. He's the perfect candidate," ex-justice minister Dominic Raab told Sky News. "If you look at the economic challenge we have, he is the one who has always been right about what we need," he said.

"We can't go back. We can't have another episode (...) of the partygate soap opera", the illegal parties in Downing Street during the anti-Covid confinement, he also said.

Johnson's final months in office were marked by several scandals, including the "partygate" scandal in which police believed he had broken the law.

He is still under investigation by the Parliamentary Standards Committee which could, in theory, lead to his suspension from Parliament or even his expulsion as an MP.

"I don't see how the new Prime Minister, who will take office next Friday at the latest, could give the country the attention it needs and, at the same time, testify and answer all these questions...", said Dominic Raab.

Former Conservative Party leader William Hague has warned a return of Boris Johnson would result in a "death spiral" for the party. "It's probably the worst idea I've heard in my 46 years as a Conservative Party member," he told Times Radio.

But Boris Johnson can always count on strong support. For Conservative MP Andrew Stephenson, "he is a proven leader". "Not only did he give us this historic victory in the 2019 general election, he also secured Brexit, he delivered the fastest vaccine deployment in Europe, he stood by our allies in Ukraine," he added.