Cameroon's victory over Brazil's B-Elf is not enough again

Cameroon's coach Rigobert Song hugged his players and was cautiously happy about the lucky win against the record world champions, while Eric Maxim Choupo-Moting stared impassively into space. 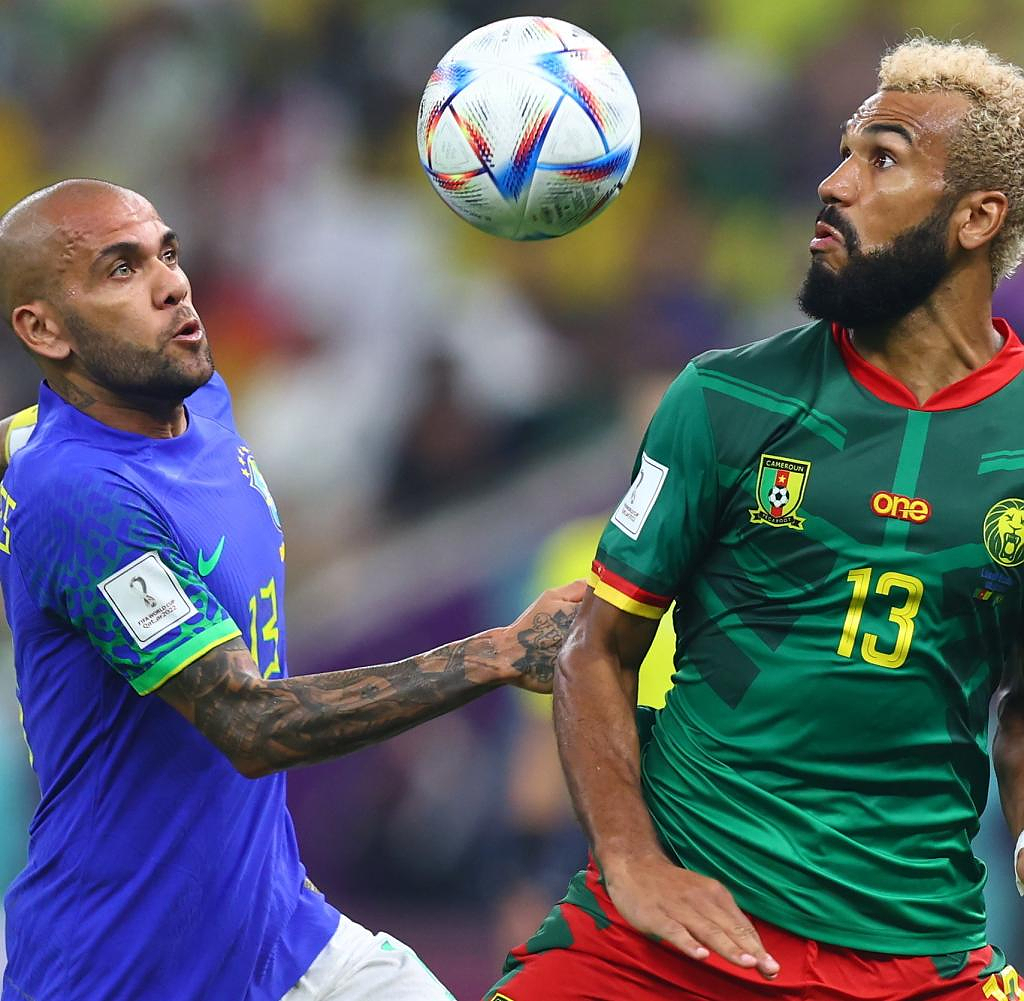 Cameroon's coach Rigobert Song hugged his players and was cautiously happy about the lucky win against the record world champions, while Eric Maxim Choupo-Moting stared impassively into space. Despite a lucky win against Brazil's B-team, Cameroon have bowed out of the World Cup.

"It's a young team. We need experience. We blew it in the first game," Song said after the game: "Today I'm proud of my players. Of course we are still disappointed, but we can grow from it. We leave with regrets, but we leave to come back.”

Vincent Aboubabar secured the West Africans a flattering 1-0 (0-0) win against the record world champions with his late header (90.2) on Friday evening, but once again that wasn't enough for the knockout round . Because the goal scorer took off his jersey while celebrating, he saw his second yellow card in the game - consequently yellow-red.

While Cameroon failed in the preliminary round for the seventh time in their eighth World Cup participation, the Brazilians want to take their next step on the targeted path to their sixth World Cup title against South Korea next Monday (8:00 p.m.). Whether Neymar, who is still injured and who watched his team's game in the stadium for the first time after his injury in the opening game against Serbia (2-0), will be back remains to be seen.

National coach Tite wants to comment on the return of his superstar over the course of the weekend. Then it should also be seen when the injured full-backs Alex Sandro and Danilo will be able to play again. “All three are in a process. Neymar and Alex Sandro in the pool, Danilo on the pitch," Tite said. Neymar suffered a ligament injury in his ankle.

The TV cameras caught him in the stands at a touching moment: Behind a goal, South American fans held up two jerseys during the Brazilian anthem. One featured football icon Pelé wearing the legendary shirt number 10 and the message “Get well soon” (“Get well soon”). Neymar looked moved.

The 82-year-old Pelé had previously been taken to the hospital in São Paulo again. According to his daughter, the medication of her father, who is suffering from cancer, is being adjusted in the clinic. Media had reported that doctors were concerned the treatment might no longer respond to the tumors in various organs of his body.

Pelé's health has repeatedly raised concerns in recent years. He underwent several hip surgeries. He also had problems with his spine and knees. Two years ago he had a kidney stone removed after a urinary tract infection. Pelé played 92 international matches and won three World Cup titles (1958, 1962, 1970).

That's what the Brazilians are planning to do in Qatar, the sixth title should finally be here, but on the way there they were able to save themselves by qualifying for the round of 16. What they did in front of 85,986 spectators had nothing to do with the starting eleven. National coach Tite made nine changes to his team compared to the 1-0 win against Switzerland, and even substitute goalkeeper Ederson got his first minutes at the tournament in Qatar. Then there was Dani Alves, who captained his team at the age of 39, becoming the Seleção's oldest player at a World Cup. But despite all the rotation: the Brazilians also dominated the game against Cameroon.

The most notable player was winger Gabriel Martinelli, who has had an outstanding season with Arsenal in the English Premier League. His speed kept posing problems for the Afrikaner right-back. The first big chance of the game also belonged to the 21-year-old. After a cross from Fred from the half field, Cameroon's goalkeeper Devis Epassy steered his header just over the goal (14'). The goalkeeper also fended off a long-range shot from the tempo dribbler (45.1).

But the game didn't really pick up speed. The Brazilians didn't have to, Cameroon couldn't. As in the previous preliminary round games, the Seleção's reserve defense hardly allowed anything. This was also due to the fact that the Cameroonians, although they still had a theoretical chance of going through to the knockout stages, acted extremely unimaginative up front. Bayern striker Eric Maxim Choupo-Moting also remained largely inconspicuous. If anyone approached the opponent's goal, it was primarily the record world champion. At least until just before the break. After a cross, Bryan Mbeumo (45.3) was suddenly free in front of Ederson, but also failed with a header at the goalkeeper.

It was the first big chance Brazil conceded at the tournament. Otherwise, the newly assembled central defense around Éder Militão and Bremer acted confidently. And on the offensive, the Brazilians approached the opening goal. First, the strong Martinelli (56th) failed again in a private duel with Epassy. Then Éder Militão (57th) was also unable to get past the goalkeeper with a low shot.

The Seleção's substitute team only had one thing to blame: their poor conversion of chances. Without Neymar with a foot injury or attackers Richarlison and Vinicius Júnior rested, there was a lack of efficiency in scoring. Substitute Everton Ribeiro (84th) didn't hit the goal either, but fired just wide after good preliminary work by Raphinha. Then Aboubakar scored in added time to win - and had to go down immediately afterwards to celebrate. It wasn't enough to get ahead.

‹ ›
Keywords:
Brasilien FußballnationalmannschaftBrasilienKamerunKamerunsVinicius JuniorDani AlvesRigobert SongKatarNeymarPremier LeagueFussballRekordWeltmeister
Your comment has been forwarded to the administrator for approval.×
Warning! Will constitute a criminal offense, illegal, threatening, offensive, insulting and swearing, derogatory, defamatory, vulgar, pornographic, indecent, personality rights, damaging or similar nature in the nature of all kinds of financial content, legal, criminal and administrative responsibility for the content of the sender member / members are belong.
Related News