Cameroon: bringing e-waste back to life

In Cameroon, the treatment of the tons of electronic waste produced each year is essentially in the hands of informal actors, trained on the job, "by observing day by day", recognizes Ismaël Alioum. 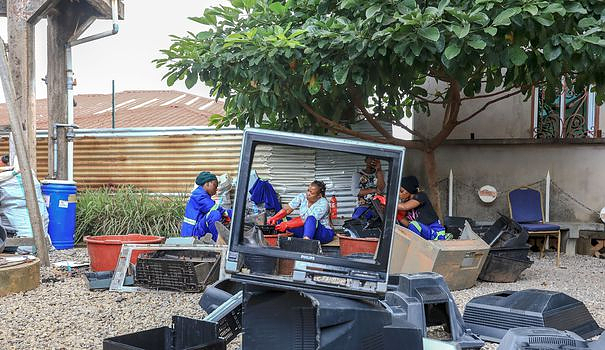 In Cameroon, the treatment of the tons of electronic waste produced each year is essentially in the hands of informal actors, trained on the job, "by observing day by day", recognizes Ismaël Alioum.

According to the scrap dealer, Chinese and Indian operators are very active in the sector and obtain their supplies mainly from players in the informal sector.

Without gloves or a protective mask, the 46-year-old man hammers an old voltage regulator. “Iron and plastic are highly sought after,” he explains, his hands full of mud. At his side, three young men armed with screwdrivers and knives are also attacking old electronic devices.

"They take what is useful and leave the rest in the wild, including what is toxic to the environment," laments Armel Poughela, director of Technological Solidarity, an NGO that offers an alternative to the informal sector by giving new life. to this equipment in compliance with environmental standards.

"Electronic waste contains harmful substances that can cause diseases such as cancer in humans when they are released into nature," said Didier Yimkoua, environmental activist and president of the NGO World Action Phyto Protection.

"When the scrap dealers break cathode ray tubes, there is mercury or lead that escapes, which is dangerous for them and for the populations", he says.

In 2012, Cameroon adopted a law on the management of electronic waste, making Solidarité Technologique, founded in 2011, one of the first operators to obtain state approval to carry out this activity. Some 25 operators benefit from it, but only two are active in the field.

The NGO collects defective devices from companies and households, to "prevent the waste from ending up in the trash", explains Augustin Kenné, head of the dismantling section.

Collections are now done by appointment thanks to the awareness work of the NGO, rejoices Camille Ndomo, an employee of Technological Solidarity, who loads on his tricycle a gas plate, an LCD screen and a landline phone just recovered in a house in the Ewonkan district, east of Yaoundé.

In the premises of the association, a dozen employees armed with gloves and masks sort, wash, then dismantle old screens, computer carcasses or electrical wires, before repairing them to sell them at a lower cost. in their shop.

According to Armel Poughela, Cameroon is the first African country to have legislated on the management of electronic waste. A binding law governs the activity and notably requires environmental permits for anyone wishing to work in this sector.

"Over the past three years, we have collected 130 tonnes of waste on average per year", details Armel Poughela, who specifies that "fifty" tonnes of waste have been "recovered" (reused) or destroyed.

The waste that the NGO cannot destroy or transform on site is transported to partners in Douala, the economic capital, and to Europe where expertise in the field is more developed.

No study makes it possible to assess the quantity of electronic waste produced by businesses and households in Cameroon, but their recycling remains low, "because the activity is not profitable", breathes Armel Poughela, in particular due to the lack of infrastructure. "We must achieve a processing volume of 5,000 tonnes per year to cover the costs," he adds.

To achieve this objective, the NGO is counting on the construction of a plant to crush and incinerate waste that cannot be recovered. “We have obtained a one-hectare site in Douala, but we do not yet have the necessary funding,” concluded Mr. Poughela.