Cairo metro: women at the helm

Paralyzed daily by traffic jams, the Egyptian capital, a sprawling megalopolis of more than 20 million inhabitants, is sorely lacking in public transport. 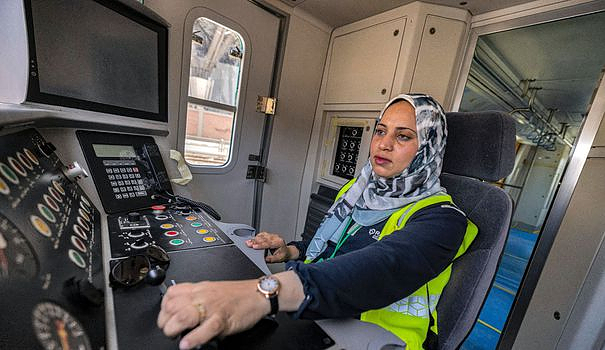 Paralyzed daily by traffic jams, the Egyptian capital, a sprawling megalopolis of more than 20 million inhabitants, is sorely lacking in public transport. And the alternatives - tens of thousands of minibuses and tuk-tuks - are unsafe.

Since the 1980s, three metro lines have transported nearly two million passengers every day, and three new lines will soon see the light of day.

But even before the inauguration of these lines, the Cairo metro made its revolution: for the first time, it opened driver positions to women.

Hind Omar, yet a business graduate, rushed to the announcement and this year trained to become a pioneer in a country where officially in 2020 only 14.3% of women had a job.

"My parents found this idea strange but they ended up supporting me", admits to AFP the 30-year-old in jeans-sneakers, black and white scarf on her head, navy polo shirt and fluorescent jacket stamped "RATP", the autonomous Régie Parisian transport, on the back.

"My husband was enthusiastic from the start and always encouraged me."

In addition, female drivers are entitled to a little help: they do not have night service, unlike men.

Encouragement, Hind Omar needed it for the entrance exam, she says trying to cover the industrial din of the metro depot wedged between the airport and the ring road.

"It was hard" because it was necessary to prove "my resistance to pressure" and above all to demonstrate "my ability to concentrate", because the main challenge is to "stay extremely vigilant for long hours".

In the end, out of a promotion of 30 aspiring drivers - men and women - supervised by the RATP and the Egyptian National Authority for Tunnels, two women obtained the right to drive metro trains.

And in Saudi Arabia, an ultra-conservative country, women are currently being trained to drive locomotives, although until 2018 they were not even allowed to drive a car.

Driving the metro remains a feat in Egypt, the most populous of the Arab countries where women have voted since 1956 but remain subject to century-old patriarchal legislation.

Suzanne Mohammed, 32, remembers her first arrivals at the station aboard her gray and water-green locomotive.

"Some passengers were afraid, they doubted my skills and said they did not feel safe with a woman at the helm," she says.

"It was new for them and I understand that they were surprised", adds the young woman with the gray headscarf in a country where the spread of a rigorous Islam, the entrenchment of conservatism and the successive blows against their rights have made it more difficult for women to have access to working life.

No offense to the grumpy, since the beginning of April, the two drivers have been at the controls of the trains of line 3, the most modern of the network, six days a week and for eight hours a day.

Almost a privilege in Egypt. If the country has several hundred female lawyers, for example, it took decades before a woman became a judge in the 2000s.

They are several today and, in March, the magistrate Radwa Helmi became the first Egyptian in history to sit on the Council of State.

At the highest level of the state, however, President Abdel Fattah al-Sissi wants to play on symbols: currently, one in five ministers is a woman and one in three MPs.

For feminists despite everything, this is only a facade since it did not prevent the government from proposing - without success - at the beginning of 2021 a bill aimed at restricting the rights of nearly 50 million Egyptian women by allowing for example to their fathers and brothers to annul their marriage.

Not enough to block the road to the two drivers of the Cairo metro who hope to "open the way for other women".

It is necessary, insists Hind Omar, "that we are numerous".