Jose Javier Martin Canizares, the chair of Cadiar's City Council, and La Rambla del Banco residents have honored Francisco Tarifa Sanchez, a child who was born in this farmhouse. 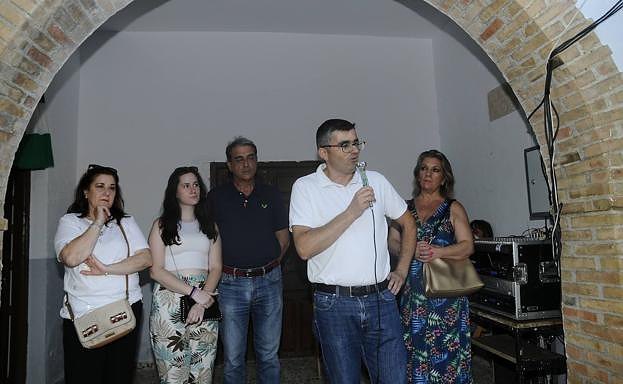 Jose Javier Martin Canizares, the chair of Cadiar's City Council, and La Rambla del Banco residents have honored Francisco Tarifa Sanchez, a child who was born in this farmhouse. He was also a provincial deputy for La Alpujarra during his presidency of this institution, Sebastian Perez Ortiz. Friends, relatives, and friends attended the act, as well as the mayor of Cadiar, Jose Javier Martin Canizares, the provincial deputy for La Alpujarra, Carmen Lidia Reyes, the former mayor of Murtas and Cecilio Martin, former provincial deputy, and many other people. Sebastian Perez would love to have attended the tribute, but he stated via phone that he had not been invited. Tarifa and Perez were a great help to La Alpujarra, and other parts of the province.

Francisco Tarifa died at the end July 2019. He was a man who gave his whole self to the region. He was also a PP councilor at the Orgiva City Council. The funeral was held in the Orgiva church of Our Lady of Expectation. Last Saturday saw festivities to honor the Virgin of Fatima on La Rambla del Banco. There was a procession, lunch prepared by Rafael Machaco (from Lanjaron), music, dance, snacks and other events. Public lighting was also inaugurated as this village had never had it.

National schools were once available in the Rambla del Banco. In 1960, the schools were opened. Antonio Moreno, 'The Carpenter', from Cadiar, donated the space to teach children how to read, write, and do math. He died twenty years ago. This village was home to more than 100 people in other times.

The Rambla del Banco almost feels like a ghost town. Their homes are in disrepair, but it is because there are few people who live in this area at 1,190m elevation. On weekends and in summer, the atmosphere in the squares and streets is a bit more lively when families from this region arrive. It is almost as if nothing has happened to it. One can almost always spot Casimiro and his two donkeys in La Rambla del Banco when one arrives.

This village was provided with a solar power station by the European Community in the 1980s. However, it stopped functioning after a few years due to neglect and lack of maintenance. Walking through these quiet streets is a lonely pastime. There is no mass tourism here. There are no traffic jams. Many areas in La Alpujarra continue to face depopulation. Some areas have more cats and dogs than residents.

This area is called that because it used to have a bench where they could shoe the animals of the surrounding villages. The area once housed 15 mules that could be used to plough, thresh or transport merchandise. The village was once devoted to agriculture, grazing and farming from sunrise to sunset. One teacher taught about 70 children from La Rambla del Banco, as well as from the farms: Los Morones,Los Castanos,Pescaero,Los Olivillos,Los Almendrillos,Los Cirujanos,, El Millonario,?, ‘El Millonario,’, La Cuesta Guitarra, La Neva,... Some children walked over ten kilometers between class and home to get there.

Masses, baptisms, first communions, and weddings were held in the hermitage Virgin of Fatima. The burials were performed and are still being carried out. Previously, they were carried on the shoulders for over two hours. Now, the funeral vehicle is used to transport the deceased to the Cadiar cemetery. Fish vendors walked from La Rabita to sell their products. Most of these homes have been converted to second homes, which are used for weekends or the summer.

This village takes you to another time. Its stunning view, perched on top of an ancient hill with almond trees, is what first surprises. La Rambla del Banco is known for its excellent vineyards, fine wine and delicious almonds. Superior figs are available. It used to have great string musicians and troubadours. Francisco Tarifa adored his land. He would approach his aunt whenever he could to walk with her, to admire her beauty, and to greet his uncle and family members who also traveled from Almeria to visit his farm. Cadiar's mayor has worked hard to ensure that La Rambla del Banco has public lighting and other improvements. A plaque was installed at the entrance to the old schools where liturgy takes place. It reads: "The Excellency Of Cadiar City Council And The Residents of La Rambla del Banco." In honor of D. Francisco Tarifa Sanchez (Provincial Deputy for La Alpujarra), in recognition of his generosity and contributions to this land. Cadiar on July 8, 2022

‹ ›
Keywords:
CadiarRindeHomenajeTituloPostumoExdiputadoFranciscoTarifaPedaniaNatalRamblaBanco
Your comment has been forwarded to the administrator for approval.×
Warning! Will constitute a criminal offense, illegal, threatening, offensive, insulting and swearing, derogatory, defamatory, vulgar, pornographic, indecent, personality rights, damaging or similar nature in the nature of all kinds of financial content, legal, criminal and administrative responsibility for the content of the sender member / members are belong.
Related News