C1: Paris, Marseille and Europe await their fate on the Bosphorus

Returning to the shores of the Bosphorus on June 10, 2023 for the final scheduled for the Atatürk Stadium is the dream of the 32 teams lined up in this 68th edition of the most prestigious of European club competitions. 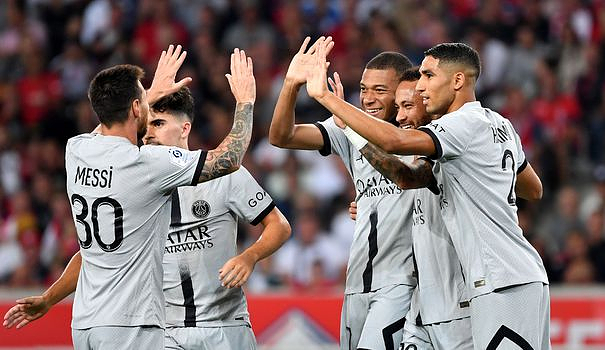 Returning to the shores of the Bosphorus on June 10, 2023 for the final scheduled for the Atatürk Stadium is the dream of the 32 teams lined up in this 68th edition of the most prestigious of European club competitions.

Cruel scenario for Turkey: after Wednesday night's elimination of Trabzonspor in the play-offs against Copenhagen (1-2, 0-0), Turkish football will have no representative in the group stage for the first time since the 1995-1996 season.

The 32 participants hope to be able to get out of one of the eight pools of four teams. Their composition will be drawn by lot on Thursday evening by former Turkish player Hamit Altintop and ex-Ivorian international Yaya Touré at the Haliç conference center in Istanbul, under the eyes of all of European football, who "end of impatience" according to the Spanish sports daily Marca.

"The party begins", summarizes in One its counterpart As, while the Italian daily La Gazzetta dello Sport launches: "Make us dream!"

Conquering the Champions League is an additional difficulty this season: the ultra-tight schedule with the World Cup in the fall in Qatar (November 20-December 18) will force the contenders for the succession of Real Madrid to string together cleaver matches from early September to early November. Missteps prohibited!

This obstacle course, PSG is ready to face it: at the end of a new summer revolution, the French champion club has decreed the end of the "bling-bling" and its attacking trio "MNM" is already sparking.

With an extended Mbappé until 2025, an invigorated Neymar and a finally acclimatized Lionel Messi, the Parisian club openly dreams of the coronation.

"These are players who want to succeed, who perhaps have a little collective revenge to take compared to last season even if they were champions", warned Christophe Galtier, the new Parisian coach.

Poured into hat 1, that of the top seeds, PSG already knows that it will avoid Manchester City, Bayern Munich and AC Milan, as well as Real, its executioner last year in the round of 16 (1- 0, 1-3).

But hat 2 is not lacking in big names, such as Jürgen Klopp's Liverpool, winner of the C1 2019 and still a finalist last year at the Stade de France (1-0).

We also find the Chelsea of ​​Thomas Tuchel, European champion 2021, the Tottenham of Antonio Conte, the Juventus of Massimiliano Allegri, the Atlético Madrid of Diego Simeone, as well as a giant in reconquest, the FC Barcelona of Xavi, who clogged his budget and recruited serial scorer Robert Lewandowski (ex-Bayern).

- OM are waiting for a strong draw -

In hat 3, Inter Milan, Borussia Dortmund or Naples also look like opponents to avoid for the Parisians.

In Marseille, the draw promises to be high anyway, since OM have integrated hat 4, that of the clubs with the most modest European indices.

With a coach, Igor Tudor, a novice in this event, and a largely overhauled workforce, Marseille will therefore inherit a seed, crossing their fingers to fall instead on Eintracht Frankfurt, holding the Europa League, Ajax Amsterdam or FC Porto, and not on Real, Bayern or City.

A tenor from the 2nd hat will also be there, but the story will be different if it is Liverpool, Chelsea or at least formidable Sevilla FC...

Anyway, OM hope to do better than in their last two participations, which had turned into a nightmare: in 2013-2014, with Elie Baup in charge, Marseille had lost their six group matches, and in 2020 -2021, André Villas-Boas and his men had only taken three points, with one victory and five defeats.

Once the draw has been made, it will be necessary to wait a little for the officialization of the calendars for the group stage, which UEFA, after consultation with the broadcasters, plans to publish on Friday evening or Saturday morning.