C1: Mbappé pissed off, series draws, PSG-OM in sight ... Where is Paris going?

- Is Mbappé happy? -</p>The art of shooting yourself in the foot. 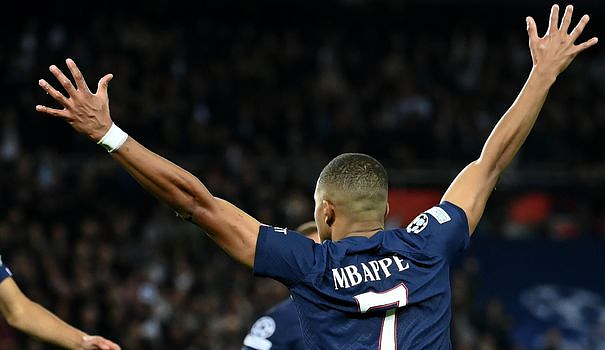 The art of shooting yourself in the foot. PSG are first in their group in the Champions League and in their championship, but still manage to spread an atmosphere of crisis.

Beyond the three consecutive draws conceded, two 1-1 against Benfica, the last at the Parc des Princes on Tuesday evening in the Champions League, interspersed with a 0-0 in Reims in Ligue 1, the new bursts around Kylian Mbappé have livened up before and after the game.

The rumor of a possible departure of the star, extended with great fanfare until 2025 last May, has been firmly denied by the sports adviser, Luis Campos.

But this rumor has, from concordant sources, been launched by Mbappé's entourage himself, to put some pressure on PSG, because the N.7 feels betrayed by its management, which would not have kept its promises. , in particular that of recruiting a great center forward, an ideal partner according to him.

"You're the one who takes things out of context," Achraf Hakimi, an ally of Mbappé in the locker room, told reporters. "He is focused on the club, he is happy here. I see him happy," assured the Moroccan.

The Parisian public did not whistle the prodigy on Tuesday evening, the player was not sanctioned by his club, and, during the meeting, Mbappé assumed his status, scoring the Parisian goal from the penalty spot to become the top scorer in C1 in club history (31 goals), while finishing man of the match for UEFA.

The spleen of "Kyky" is not the only problem. Two goals scored in three draws, PSG have slowed down significantly. "It's just, we're less flashy, less brilliant, less dangerous," admits Galtier, who "doesn't think it's a less physical blow".

"At the start of the season, we were going much faster, with a lot more play in the verticality once we had created the gaps."

Neymar, dazzling since August, is marking time a little. Against Benfica, he got lost in successful dribbling, but on the side, or a blow from the splendid sombrero, but in the central circle.

In addition, business also awaits the Brazilian, his trial for "corruption" and "fraud" opens Monday in Barcelona, ​​one month before the World Cup in Qatar (November 20-December 18). The story has been going on since 2016, when the Brazilian agency that partially managed the player's image rights, DIS, considered itself wronged in the transfer of "Ney" from Santos to Barcelona three years earlier.

- A classic with a heavy stake -

It is in this gloomy and tense atmosphere that PSG is preparing one of the major meetings of the year, eagerly awaited by its supporters who have been singing anti-Marseille songs at the end of each match for 15 days.

The Mbappé affair will inevitably leave traces. Before his first classic, in 2017, the prodigy had made a small error of appreciation (he admitted it later) by evoking a match “like the others”.

So far, every time Mbappé has been talked about off the pitch, from his unfortunate exit to the UNFP trophies where he demanded more responsibility, to his disagreements with the French Football Federation (FFF) over the image rights of internationals, he responded on the pitch, scoring goals.

A victory against his best enemy, with a great match from Mbappé, would revive PSG. Otherwise, the traditional November crisis will be a little early.