Bus line 153, which connects Hijar with Granada, will be operational from April 1. 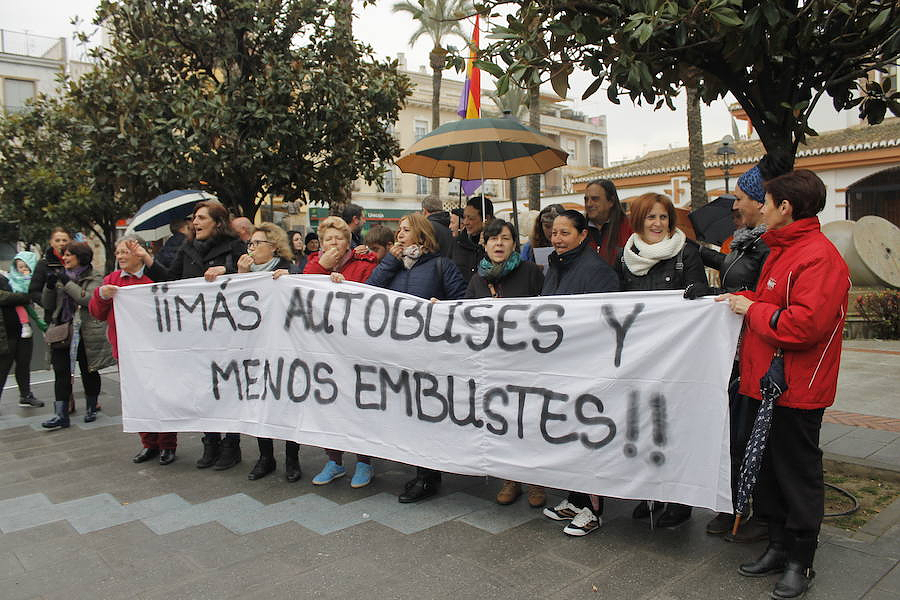 Bus line 153, which connects Hijar with Granada, will be operational from April 1. It will stop at 4 stops on Cristobal Colon avenue. The bus will run every hour Monday through Sunday. It will be implemented by the City Council at a cost of 20,000 euros annually.

Another line connects Cullar Vega to Granada. It runs along San Ramon de Churriana Street. This line does not pick up passengers in Churriana "due lack of capacity". Antonio Narvaez (the mayor of Churriana) described it as an "absolutely unjust situation". Both lines would allow churrianeros travel to Granada on both lines. Line 156 is also "as it stands" and, in the unlikely event that line 150 doesn't pick up users from Churriana anymore, the City Council will spend an additional 40,000 Euros per year to strengthen it and maintain its services.

Narvaez claims that this is the Churriana government team's commitment to "reverse the cuts that have been suffered due to the Metro trips starting, an infrastructure which does not pass through our community, in which, we believe, and that we have contributed towards developing despite everything".

Both men and women attended the concentrations, but women were the most affected as it was their only means of transportation to get to work in Granada. Rosa Aviles says that line 156's 30% reduction has had a significant impact on their daily lives. "Before the bus frequency was 20 mins, we now wait around an hour. So anyone who has to go work must look for life or go as far as Armilla as possible, "says Rosa Aviles. They also denounce the fact that they are "isolated" on weekends because the last bus leaves at 3:00 in the afternoon.

Mari Angeles Cantero, spokesperson for the group, stated that "Churriana doesn't deserve the treatment being given it by the Metropolitan Transport Consortium". She also assured that they would continue to collect signatures, "if line 156 cannot be restored as how was I before".

The "Women Fighters Churrianeras" ask all political parties to join them in support of the cause that affects all neighbors. Andres Perez, IU's spokesperson in the Consistory says that given the data from line 156, "it is justifiable that the services continue as they were or even increase." IU has a pessimistic opinion. "The users of public transport have been held hostage to blackmail municipalities and demand more money." Andres Perez requested the specifications and results for line 156 over the past two years "to determine if the Consortium's guarantee of a decrease in trips per year allows them to lower the frequency." Perez claims that Armilla lost passengers because of the Metropolitano's start-up, but Las Gabias has negotiated lines with the consortium and now has the 158D and 158D. "Given that each municipality negotiates directly with Consortium, it is logical that 156 only a service to Churriana," states the IU spokesperson, stressing that there must be "agile transportation capable of responding the needs of the populace."

Manuel Lopez, the PSOE spokesperson in the City Council, stated that the reduction in these buses directly impacts all residents. He asked that the schedule be restored to the way it was before.

‹ ›
Keywords:
LineaAutobusHaraCuatroParadasChurrianaVega
Your comment has been forwarded to the administrator for approval.×
Warning! Will constitute a criminal offense, illegal, threatening, offensive, insulting and swearing, derogatory, defamatory, vulgar, pornographic, indecent, personality rights, damaging or similar nature in the nature of all kinds of financial content, legal, criminal and administrative responsibility for the content of the sender member / members are belong.
Related News