Burkina: putschist Traoré on the 35th anniversary of the death of Thomas Sankara

In military fatigues and a red beret, Captain Traoré, appointed Friday president of the transition by national meetings, laid a wreath of flowers at the foot of the huge statue of Thomas Sankara, erected in 2019 on the site where he was assassinated October 15, 1987 and where a memorial was created. 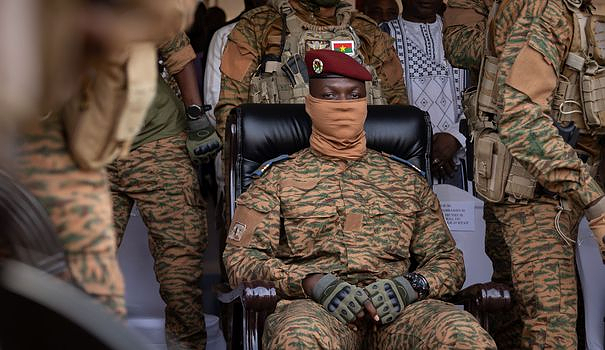 In military fatigues and a red beret, Captain Traoré, appointed Friday president of the transition by national meetings, laid a wreath of flowers at the foot of the huge statue of Thomas Sankara, erected in 2019 on the site where he was assassinated October 15, 1987 and where a memorial was created.

Mr. Traoré then received, alongside 11 other recipients, a trophy symbolizing the “passing of the torch from the revolution to the youth”.

Captain Traoré is, at 34, the same age as Captain Sankara was when he took power in 1983, also during a coup.

"After all the efforts dedicated to obtaining justice, today the most important mission is to transmit to future generations the ideal, the vision and the values ​​carried by Thomas Sankara", declared the president of the memorial, Pierre Ouédraogo.

According to him, it was "important" that this torch be handed over to Captain Traoré, "the highest personality of the State, so that the ideas, the values ​​of Thomas Sankara can inspire him to perhaps build the Sankarism of the 21st century. ".

"Whatever happens in Burkina", plagued by jihadist violence since 2015, "Sankara is and remains a symbol, a reference in the face of challenges, difficulties, to move forward", continued Mr. Ouédraogo, retired colonel.

The new strongman of Burkina Faso did not speak.

Came to power by a putsch in August 1983, Thomas Sankara, a pan-African icon with progressive ideas, was killed on October 15, 1987 during another coup fomented by his number two, Blaise Compaoré. The latter will keep power until his fall in 2014, following a popular uprising.

During Mr. Compaoré's 27 years in power, the death of Thomas Sankara, who wanted to "decolonize mentalities" and upset the world order by defending the poor and oppressed, was a taboo subject.

Blaise Compaoré was chased by the streets for wanting to modify the constitution and stay in power. He has since lived in exile in Côte d'Ivoire.

In April, the Ouagadougou military court sentenced him in absentia to life in prison for his role in the assassination of Thomas Sankara and 12 of his companions, following a six-month trial.