Burkina: putschist Ibrahim Traoré president of the transition until 2024

Captain Traoré was appointed by national meetings bringing together some 300 representatives of the army and the police, customary and religious organizations, civil society, trade unions, parties and internally displaced victims of the jihadist attacks hitting Burkina. 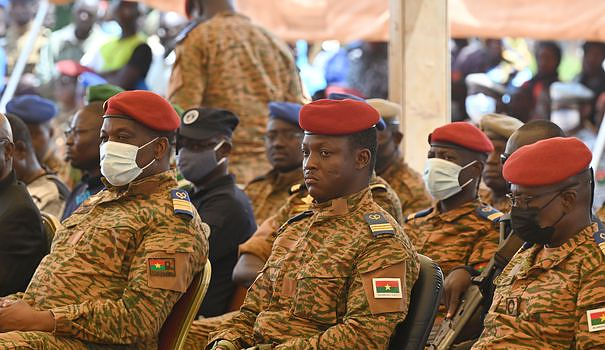 Captain Traoré was appointed by national meetings bringing together some 300 representatives of the army and the police, customary and religious organizations, civil society, trade unions, parties and internally displaced victims of the jihadist attacks hitting Burkina. since 2015.

To cheers, the young 34-year-old captain, who has chaired a junta called the Patriotic Movement for Safeguarding and Restoration (MPSR) since September 30, signed Friday evening at the end of the work, a "Transition Charter" which made him president for the next 21 months.

A member of the junta had previously told AFP that this article had been adopted "unanimously".

The charter maintains a government of 25 members and a Transitional Legislative Assembly (ALT) of 71 unpaid members, apart from sessional allowances.

Twenty of the members of the ALT will be appointed by President Traoré, 16 by the Security and Defense Forces (FDS), the others by the regions, political parties and civil society organisations.

On January 24, soldiers led by Lieutenant-Colonel Paul Henri Sandaogo Damiba and grouped within the MPSR overthrew President Roch Marc Christian Kaboré, accused of incapacity in the face of the jihadist attacks which have multiplied in Burkina.

They have not stopped in eight months and, faced with the constant deterioration of the situation, a new putsch took place on September 30, which brought Ibrahim Traoré to power, in order to "refocus the transition on security emergencies", according to the junta.

Captain Traoré had assured that he would only expedite "current affairs" until the designation of a new civilian or military transition president by "national assizes".

But since his coup, he has not ceased to benefit from the support of the street.

Again on Friday, several hundred people demonstrated near the Conference Center where the meeting was held, brandishing his portrait and shouting his name, others waving Russian, Burkinabè and Malian flags.

"We want Captain Traoré or nothing. Participants in the assizes must clearly understand this message and follow the people's choice," said protester Sayouba Ouedraogo.

"We know exactly what we want" and "this is the confirmation of Captain Traoré as head of state and president of Burkina Faso", said Monique Yeli Kam, who represents the Movement for the Renaissance of Burkina Faso. (MRB, ex-opposition) to the assizes.

According to her, it "embodies renewal, a generational renewal, a break with old practices".

The French ambassador to Burkina Faso, Luc Hallade, had called on his compatriots "to limit" their movements on Friday "to what is strictly necessary", "for fear of new protest movements".

French interests in Burkina, including the embassy and two French Institutes, were attacked by pro-Traoré demonstrators during the last putsch.

Regular attacks by armed groups affiliated with Al-Qaeda and the Islamic State (IS) group have killed thousands and displaced some two million people since 2015.

More than 40% of the territory escapes the control of the State, in particular on the side of the borders with Mali and Niger.

Captain Traoré assured that Ouagadougou would continue to respect the commitments made under Mr. Damiba vis-à-vis the Economic Community of West African States (ECOWAS), in particular on the organization of elections and a return of civilians to power no later than July 2024.