Brussels attacks: start of the debates, the moment of truth for the victims

After the constitution of the popular jury on Wednesday, the hearing resumed Monday shortly before 10:00 a. 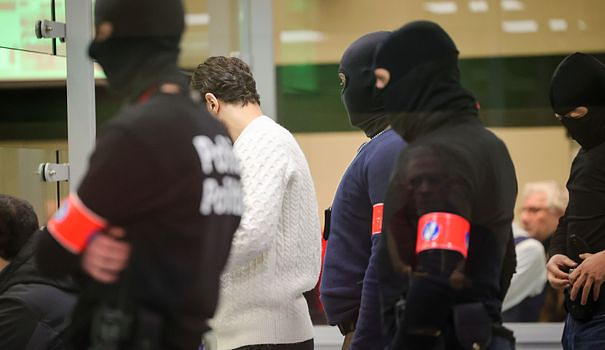 After the constitution of the popular jury on Wednesday, the hearing resumed Monday shortly before 10:00 a.m. (09:00 GMT) to finally get to the heart of the matter. The debates are expected to last until June.

On the morning of March 22, 2016, two jihadists blew themselves up in the departures hall of Brussels-Zaventem airport, and a third a good hour later in a metro station in the European district, causing 32 deaths and several hundreds of injured.

These suicide attacks, claimed by the Islamic State (IS) group, were perpetrated by the jihadist cell already at the origin of the attacks of November 13, 2015 (130 dead in Paris and Saint-Denis).

Faced with nine defendants, including the Frenchman Salah Abdeslam - the only surviving member of the November 13 commandos, arrested in Brussels four days before the attacks of March 2016 - more than a thousand people are claiming compensation for damage, according to the federal prosecutor's office.

Among these civil parties: parents or relatives of the 32 killed, people injured by the explosions or traumatized by the "scenes of war" experienced that day.

Opening the hearing, the president of the court Laurence Massart noted the absence of two of the 24 substitute jurors.

The 12 full jurors are assisted by an exceptionally high number of alternates, likely to replace the slightest absence when deliberating on the verdict.

On the sidelines of the hearing, a defense lawyer, Stanislas Eskenazi, criticized the drastic conditions of detention and transfer of the defendants at trial, "a conditioning which does not suggest that they will speak here". The trial is taking place under high security.

The degree of participation of the defendants is one of the unknowns of the trial, with the number of civil parties who will agree to testify publicly.

One of the defendants, Osama Krayem, refused on Monday to stand up and answer questions during the call, adopting the same attitude as on Wednesday during the jury formation.

Danielle Iwens, who worked behind a check-in counter in Zaventem on March 22, 2016, is one of the victims who will not go to trial for fear of experiencing "too much stress".

"It's not good for my health, physically it's too hard," the 58-year-old woman, who has lost 60% of hearing in one ear and can't hear, told AFP before the trial. more to concentrate like before.

Conversely, Philippe Vandenberghe intends to come and testify to the trauma suffered when he intervened as a volunteer first aider in the hall of the airport devastated by the double explosion. In the middle of all these bodies lying on the ground, some dismembered.

For this 51-year-old computer scientist, the trial must be "the start of something else". "We hope that our suffering will be recognized, that's the important thing."

After the explanations of the president on the organization of the hearing, will come the stage of the reading of the indictment, from Tuesday and probably until Thursday inclusive. It is a document of some 500 pages.

The defendants are supposed to be questioned from December 19, and the first testimonies of victims expected in mid-January.

For Salah Abdeslam, sentenced in June in France to life imprisonment in the procedure of 13-November, hovers the risk of a new very heavy sentence in Belgium.

In the group of logisticians suspected of the attacks, this Belgian-Moroccan is being prosecuted for "participation in the activities of a terrorist group". He risks up to ten years firm.

Seven of the nine accused are in the box, the other two - Smaïl and Ibrahim Farisi - appearing free. A tenth man is tried in his absence because presumed dead in Syria.