Called at the end of the morning, the investigators were able to establish that "two to three incendiary devices were thrown inside and outside on the premises" of the immigration services of the Ministry of the Interior, injuring two people inside, according to Kent Police. 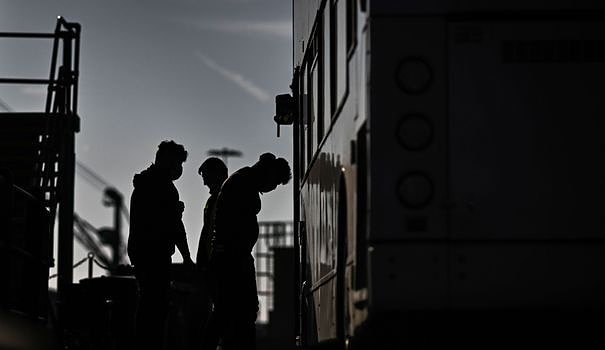 Called at the end of the morning, the investigators were able to establish that "two to three incendiary devices were thrown inside and outside on the premises" of the immigration services of the Ministry of the Interior, injuring two people inside, according to Kent Police.

They were launched by a single suspect who arrived on the spot by car, and who was "identified, very quickly located at a nearby gas station" and whose death was confirmed.

According to press reports, he would have ended his life.

Officers then discovered another incendiary device in the suspect's car, police said.

The site remains open, but 700 migrants were taken to another site during the first phase of investigations.

Interior Minister Suella Braverman spoke of "shattering" facts, ensuring that she was regularly informed of the situation.

Video posted by the Daily Mirror website shows large flames at a location which appears to be outside the reception centre.

According to local MP Natalie Elphicke (conservative), this is where migrants disembark before being sent to a temporary accommodation centre.

"We do not know the motivations" of the suspect, who according to her committed suicide, but this attack comes in a context of "significant tensions". On the airwaves of private radio LBC, she notably cited the intrusion last Sunday of migrants into a residential area where one of them was "apprehended in a woman's bedroom".

The attack comes as nearly 1,000 migrants arrived on English shores on Saturday after crossing the English Channel, according to British government figures.

They are now nearly 40,000 since the beginning of the year - already far more than for the whole of 2021 - to have made the perilous crossing aboard small boats, in one of the busiest straits in the world. .

A spokesman for the UK Home Office simply said the Home Office was aware of an incident and police were dispatched to the scene, declining "at this stage" to comment further.

Struggling to fulfill the promise of better control of immigration with Brexit, the government has the highly controversial project of sending asylum seekers who have arrived illegally to Rwanda.

Suspended in particular due to legal appeals, the project, designed under the mandate of Boris Johnson, is supported by the new Prime Minister Rishi Sunak.

Himself the grandson of Indian immigrants, he took a tough stance on immigration, and appointed ultra-conservative Suella Braverman to the Home Office, a move that appears to be a move towards the wing right of the Conservative Party.

On Friday, Rishi Sunak pleaded for better cooperation with France during a telephone interview with President Emmanuel Macron.

He underlined "the importance for both countries of making the Channel route completely impassable for human traffickers" and the two leaders "committed to deepening their partnership in order to discourage the deadly Channel crossings which benefit organized criminals", according to its services.

The two countries have already agreed that the British government will financially help the French authorities to better monitor their coasts to prevent departures.

But according to The Times newspaper, Rishi Sunak wants to go further and wants a global agreement with quantified targets of intercepted boats and British border police officers patrolling France.

He also wants to set targets for 80% of asylum applications to be processed within six months, against an average of 480 days, but also to tighten the conditions for granting asylum.