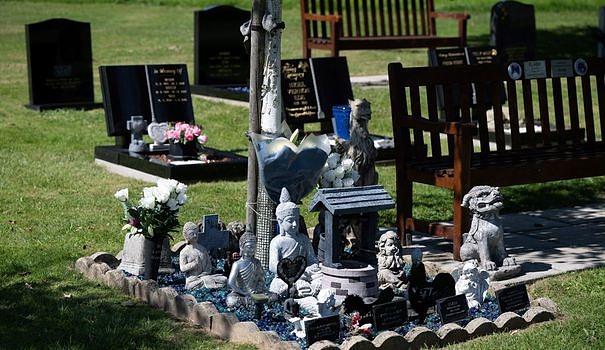 "The way things are going, gas, electricity, grocery prices, fuel, everything is difficult," says Mr. Mcauliffe, sitting next to his friend Julie Fielding in the animal cemetery of Holywell, in North Wales.

Both, who are on social assistance, launched a fundraiser on Facebook to finance the cremation of their dog Khan. They couldn't have done it alone, given the skyrocketing costs.

“Dogs depend on us for everything, and we have to do what is necessary for them, at the end of the day,” continues Mr. Mcauliffe.

The inflation rate in the United Kingdom jumped in July to 10.1%, and could exceed 13% in October, a rate not seen in 40 years.

Pet food and vet fees have increased, as well as the cost of cremations, which track oil prices.

“An individual cremation is when an animal is entirely cremated so that the ashes can be returned to their families so they can scatter, bury them or keep them in their homes,” says cemetery director Jason Ward.

The price of an individual cremation depends on the size of the animal, but reaches 200 pounds (237 euros) for a medium-sized dog.

Otherwise, "the remains are treated with those of other pets", he continues: "often, they are collected in trucks with waste from veterinary clinics, to be dumped in landfills".

A difficult outcome for many Britons, whose attachment to their four-legged friends has become even stronger during the confinements due to the Covid-19 pandemic.

The United Kingdom has some 34 million domestic animals, including 12 million dogs and as many cats, for some 67 million inhabitants.

Holywell Cemetery bears witness to these very strong links: several plots house the remains of animals and those of their owners.

The ashes of Mr Mcauliffe's mother and Ms Fielding's sister already rest alongside those of Khan and their previous dog, Flash, and the couple would like to join them "when the time comes".

The increase in the prices of veterinary care has also resulted in higher costs for health insurance.

“Whether we make a statement or not, each year the contributions increase”, summarizes Mr. Mcauliffe, calling on the British government to take more action against soaring prices.

"It can be problematic, especially when you only get social benefits," he says. He and his partner have two other dogs.

Often, it is at the end of their life that animals require the most veterinary care: with burial costs, it is a double blow for families already in mourning.

And some have no choice but to give up a funeral.

Dogs, cats and others "are members of the family, they contribute enormously to our well-being, and during the pandemic everyone has spent more time with their animals", underlines Mr. Ward.

"So the time comes when they die, and the owners can't afford to say goodbye to them with dignity. It's an additional cause for grief," he says.