"Breaking the morale of the Ukrainians": Putin's new risky strategy 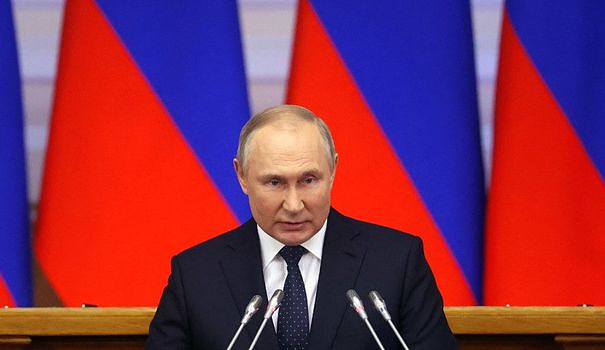 Tirelessly, the Russian shelling continues. The Ukrainian general staff indicated on Thursday, December 1 that two new salvoes of missiles had hit civilian areas in the Zaporizhia region the day before. In recent weeks, there have been many across the country. With the arrival of winter, and its freezing temperatures, the Russian army has adopted a new strategy: to destroy Ukraine's energy infrastructure. A policy of terror intended to bend the country by freezing it.

"Russia is no longer winning victories on the ground, so it wants to break the morale of the Ukrainians to push them to negotiate, gauges General Dominique Trinquand, military expert and former head of the French mission to the UN. Currently, nearly half of the electricity grid is out of order following the bombings that have hit the country's infrastructure in recent days.The result: millions of Ukrainians find themselves regularly without power. "Russia has destroyed 40% of the Ukrainian energy system with terrorist missile attacks. Dozens of energy workers have been killed and injured,” private operator DTEK said on Thursday.

On a strategic level, however, it seems unlikely that this targeting of energy infrastructure will upset the situation in favor of the Russians. “They have no chance of obtaining victory thanks to that, slice Michel Goya, former colonel of the navy troops, today a historian of the war. After all the sacrifices to which they have already made, it is absurd to believe that the Ukrainians will agree to surrender because they are cold." Especially since on the ground, Moscow still seems to be at an impasse. In the Donetsk region, his forces are making only very marginal gains around the town of Bakhmout, after six months of repeated and manpower-intensive assaults.

“These strikes against infrastructure are more of a default strategy, because Russian military margins of maneuver are very slim. Historically, we know that this type of campaign has never worked, continues Michel Goya. Germany's use of V1 and V2 weapons against British cities in World War 2. Apart from satisfying the Nazi regime's need for revenge and showing German public opinion that Berlin was not content to suffer the events, it had been useless."

Photo transmitted on October 22, 2022, shows Ukrainian firefighters extinguishing a fire on an infrastructure hit by a missile in Rivne

Faced with the multiplication of these strikes, the West announced this week the strengthening of their logistical support. On Tuesday, Germany announced the upcoming supply of "more than 350 generators" to kyiv. In parallel, the EU has requested the activation of a civil protection mechanism with a view to delivering 500 additional units. The head of American diplomacy Antony Blinken, for his part, promised Monday financial aid of 53 million dollars, in addition to a previous envelope of 55 million, for the purchase of new generators. In total, Washington has budgeted $1.1 billion for energy in Ukraine and Moldova, a country also affected by energy problems linked to the war in Ukraine.

In the short term, the Ukrainian forces expect Russian pressure to continue. On Monday, spokeswoman for the Ukrainian army's southern command, Natalia Goumenyuk, warned that a Russian ship "carrying eight Kalibr-type missiles" had appeared in the Black Sea. "This indicates that preparations are underway," she added. "However, due to the continued degradation of Russia's missile arsenal during previous strikes, it is likely that Russia will seek to maintain, not escalate, the current tempo of strikes on Ukrainian critical infrastructure," notes in a report by the Institute for the Study of War, a Washington-based think tank.

In fact, after months of strikes, the stock of Russian missiles is dwindling. On November 22, Ukrainian Defense Minister Oleksii Reznikov estimated that Russia had used 87% of its high-precision Iskander missiles and 63% of its Kalibr. "At this rate, the Russians should reach the end of their capacities around January or February if they do not receive help from other countries in the meantime", underlines Michel Goya.

A shortage of ammunition far from being anecdotal for a Russia whose aviation has never succeeded in imposing its air superiority in Ukraine. In a note published on November 27, British intelligence indicated that the Russian army was probably reduced to "removing nuclear warheads from its aging nuclear cruise missiles" in order to use them for conventional strikes, pointing out that such a practice "highlighted the level of depletion of the Russian stockpile of long-range missiles."

In addition to emptying its stocks, Moscow's targeting of Ukrainian infrastructure could even prove counterproductive. "When soldiers fighting on the front line learn that their family is shivering with cold after Russian bombardments, it can have an effect on their morale, underlines General Trinquand. But it will rather strengthen their determination to combat." Or the opposite of the desired goal.