Brazil welcomes the heart of its first emperor

The 187-year-old relic, carried by the Portuguese city of Porto's police chief, Antonio Leitao da Silva, was received at the Planalto presidential palace by President Jair Bolsonaro and his wife, Michelle. 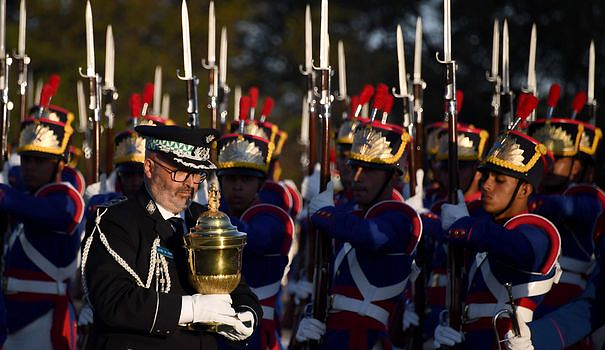 The 187-year-old relic, carried by the Portuguese city of Porto's police chief, Antonio Leitao da Silva, was received at the Planalto presidential palace by President Jair Bolsonaro and his wife, Michelle.

Air Force planes formed a heart in the sky with smoke over the Three Powers Square, the epicenter of the Brazilian capital.

The nine-kilo gold urn that contains the monarch's embalmed heart was escorted by members of the Independence Dragons Corps, a sequence that is part of the celebrations for the bicentenary of Brazil's separation from Portugal on September 7 .

Peter I declared independence from Brazil in 1822 and established a constitutional empire there, but abdicated nine years later and returned to Portugal, where he thwarted attempts to return to an absolute monarchy.

After his death, his personality was celebrated in both countries as an advocate of liberal causes.

His heart remained in the Church of Our Lady of Lapa in Porto, Portugal, while the rest of his body was transferred to Brazil in 1972 and rests in a monument dedicated to independence in Sao Paulo.

For the first time outside Portuguese lands, the relic has received the honors of a state visit to Brazil since its arrival on Monday. It will be exhibited at the headquarters of the Ministry of Foreign Affairs until September 8, before returning to Porto.