Brazil: under Bolsonaro, the plunge of evangelicals into politics

No doubt for her: "only Jesus can save Brazil from corruption and from Lula". 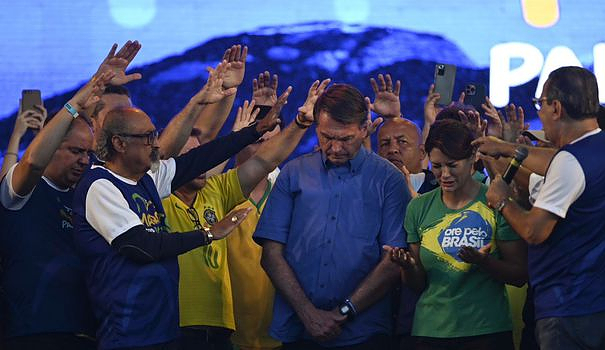 No doubt for her: "only Jesus can save Brazil from corruption and from Lula".

The ties between Brazilian President Jair Bolsonaro and evangelical churches, a confession of his devout wife Michelle, have only tightened under his tenure.

With the slogan "Brazil above everything and God above all", the far-right head of state defended ultra-conservative values: opposition to abortion and gay marriage in particular . He even appointed his first evangelical justice to the Supreme Court.

In the Chamber of Deputies, Evangelicals have become a powerful group, with 112 deputies out of 513. They now represent 30% of the Brazilian population and are mostly part of the less privileged classes.

In the secular state that is Brazil, this current of Protestantism, generally neo-Pentecostal, is influential even in the highest spheres of power.

As for the base, it is active in the streets of Brazil currently, to promote the candidacy for re-election of Bolsonaro, less than four weeks before the first round of the presidential election which will oppose him to the favorite of the polls, the former -Left President Luiz Inacio Lula da Silva.

"Religion must mix with politics. It is a part of the society we are part of and we need evangelical policies", assures Rafael Moreira Macedo, conservative activist.

He is campaigning for Claudio Castro, Bolsonaro's allied candidate for governor of the state of Rio, in front of the Church of the Assembly of God Victory in Christ (ADEVC) in Penha.

"Some people think that evangelicals cannot get involved in politics. But why not? We are also citizens of the world", abounds Solange Ferreira, a teacher in her sixties, before returning to attend worship.

The majority of evangelicals openly say they support Bolsonaro, echoing his rhetoric, including his criticism of the left for his involvement in corruption scandals.

"I don't know anyone who votes for Lula," says Alessandra Abreu, a 22-year-old student who has been an evangelical since she started accompanying her mother-in-law to church three years ago.

"Bolsonaro is opposed to anything harmful to teenagers and adults," she explains.

During worship, she listens carefully to the sermons of Pastor Silas Malafaia, friend and close adviser of Jair Bolsonaro. "I know he's not lying," adds the young woman, who says she has no confidence in the press or social networks.

According to the Datafolha institute, Bolsonaro obtains 48% of the voting intentions of the evangelical electorate, and Lula 32%.

It is the opposite of the general population, which would choose the president at 32% but would prefer Lula at 45% in the first round of October 2.

"Of course I'm going to vote Bolsonaro," says Giociani Lucio, 33, married and mother of a little girl. "Because the family composed of a man and a woman is superior to everything".

"If all evangelicals are open-minded like me, they will vote for 22," she says, referring to the number that the voter must choose in front of the electronic ballot box if he votes for Jair Bolsonaro.

For 56% of Brazilian voters, politics and religion go hand in hand, again according to Datafolha.

And 60% even think that it is more important that a presidential candidate defends family values ​​rather than a good economic program.

Thus conservative values ​​are shared far beyond the temples.

Rafael Moreira Macedo explains that evangelicals do a lot of proselytizing.

“We are in contact with a lot of people,” he explains. "We infect others, but in a positive way".

“I never counted them, but I convinced many people throughout my life,” he says.