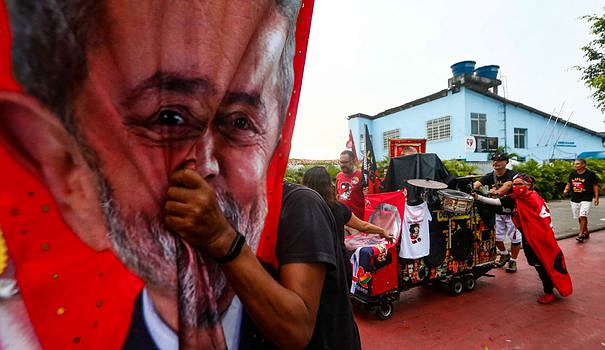 "We can't take it anymore. In this country, the violence against women, black people, the LGTB community is alarming. We need love, affection, joy... and (President Jair) Bolsonaro is quite the opposite,” says Jonathan Raymundo, a 33-year-old Afro-descendant with dyed pink hair.

"The highest authority in the country makes jokes saying that black people are weighed in arrobas (unit of measurement from the time of slavery), that a woman does not deserve to be raped because she is ugly, or that he can do nothing for the dead of Covid-19 because he is not a gravedigger", indignantly this cultural producer, founder in 2018 of an Afro-Brazilian festival in Rio.

"Brazil is at a crossroads, with the opportunity to become a great country. But that will only happen if it is able to integrate its racial diversity into the spheres of power," says Jonathan Raymundo.

He believes that the Workers' Party (PT) of Luiz Inacio Lula da Silva, 76, has brought "fundamental and civilizing progress" even if he regrets the non-renewal of the political elites: "There is no 'alternative now, Lula must be president again'.

Computer science professor Messias Figueiredo is a figure in left-wing protests in Salvador de Bahia. Identifiable with his beret and rectangular glasses, he pushes everywhere he goes a cart with a DJ table adorned with Lula's face. "It is an instrument of peaceful political struggle", explains the 56-year-old man who broadcasts pro-Lula songs and messages.

According to him, the ex-steelmaker "enabled millions of Brazilians to get out of poverty" and his two "governments have been the best in the history of the country".

But Lula is above all his champion because he "comes from Nordeste, a region that has always lagged behind the rest of the country". If he wins the presidential election, his first fight will have to be to "stop the famine", he believes.

Lula "has already shown himself to be very competent in leading the country", he asserts, and "no one can put up with this fascist, genocidal and dehumanizing government any longer".

Messias Figueiredo accuses the Bolsonaro government of having "devastated" the environment and "massacred" the natives.

- Aline Xavier, trade unionist who owes everything to Lula

"There is no one other than Lula to lead our country," says Aline Xavier, 33, born in the suburbs of Sao Paulo.

For this health official, leader of a union of municipal workers, the Workers' Party (PT) is more than just a union: it is her "ideology of life".

The party co-founded by Lula in 1980 helped her "contradict the statistics" and make a career "despite" being a black woman from the poor suburbs: "He opened doors for me to have a voice ( …) and not be excluded because I am a woman and black”, she declares.

Educated in a public school inaugurated while the PT was in power, Aline Xavier believes "in everything Lula does" and rejects "the neoliberal policies of the current government, the attacks on workers' rights and intolerance towards minorities". .

Married, mother of a 15-year-old teenager and pregnant with her second child, she is convinced that the leader of the left will once again set up "a government that goes to the suburbs, gives opportunities to black people, to the poor, workers or single mothers, and recognizes that there can only be meritocracy when there is equality".