Brazil: in Copacabana, a yellow and green tide "on a mission" for Bolsonaro

"The election is October 2, we have a month to fulfill this mission, to prevent Brazil from sinking like Argentina, Venezuela or other South American countries" governed by the left, says to AFP this 41-year-old teacher from the small town of Morrentes, in Parana (south) 850 km from Rio. 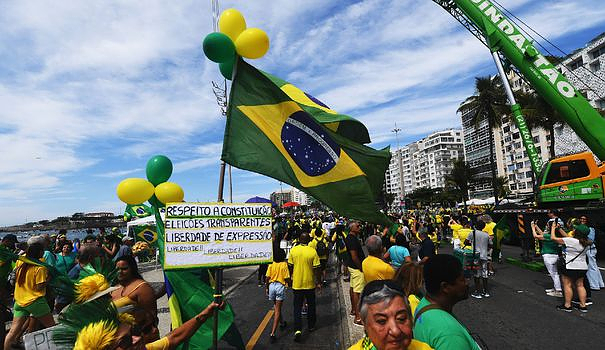 "The election is October 2, we have a month to fulfill this mission, to prevent Brazil from sinking like Argentina, Venezuela or other South American countries" governed by the left, says to AFP this 41-year-old teacher from the small town of Morrentes, in Parana (south) 850 km from Rio.

He is dressed in a yellow and green t-shirt, the colors of the Brazilian flag, like almost all the other demonstrators who responded to the Head of State's call for celebrations of the Bicentenary of Independence in the style of immense campaign rally in Rio, his electoral stronghold.

"This crowd is a show of force, to show what Brazil really wants. If the elections are clean, he will be elected in the first round, for sure", insists Orley Antunes, despite the polls which give the head of state losing to the left-wing ex-president Luiz Inacio Luiz da Silva.

On the sidelines of the military parade that launched the celebrations on Wednesday morning in Brasilia, Jair Bolsonaro told tens of thousands of supporters that the polls were "false".

"If Bolsonaro loses and he recognizes his defeat, he will have to accept it. But if there is the shadow of a suspicion about the reliability of the ballot boxes, we will take to the streets again", assures this blond forty-something with green eyes, who does not believe in episodes of violence in the event of a dispute over the result.

"I, for example, have a weapon, but I didn't take it today."

One of the president's sons, deputy Eduardo Bolsonaro, had nevertheless invited Brazilians who "bought a weapon legally" on Monday to volunteer in his father's campaign.

- "The Army alongside the people" -

Fernando César Alves, a 34-year-old dog trainer who also came to Copacabana, fully agrees with him: "I don't believe in polls, I believe in what I see, this crowd gathered here", says this young man in sipping a beer by the beach.

"The Army is at the side of the people, to send a message to the whole world!", Can we hear from one of the dozens of trucks which broadcast deafening messages through loudspeakers.

From the Copacabana military fort, a cannon salvo is fired, as every hour since 8:00 am, startling some demonstrators, but then triggering thunderous applause.

"We are here because we don't want communism in Brazil. Bolsonaro embodies the defense of the traditional family, of Christian values," said Aline Giovanoni, an evangelical housewife who came with her 15-year-old daughter.

A few meters from her, a man with graying hair attracts all eyes. He is in a black suit, girded with a presidential scarf and looks like the head of state.

"We are here because we believe in the future of Brazil and we want to show that our president is the best", declares this look-alike known as the "Bolsonaro de Recreio", a district in the west of Rio by the sea. where he lives.

Suely Ramalho, a 78-year-old real estate agent, supports Bolsonaro because he is "brave" and "fearless".

"You have to see all the harm done to him, the media, the left, the Supreme Court. But I am confident. If there is no fraud, he will win in the first round", says this woman black woman with braided hair. She had voted for Lula in the past, then was "tremendously disappointed".