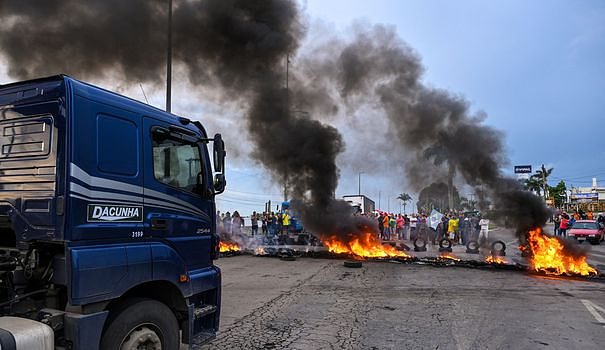 Not a public appearance, not even a tweet. More than 40 hours after his narrow defeat against former socialist president Lula, outgoing far-right president Jair Bolsonaro remains silent. After losing by a short head on Sunday evening (49.1% of the vote against 50.9%), the Head of State - still in office - had isolated himself in his official residence of Alvorada in Brasília, without doing the slightest statement.

This heavy silence, of which Lula had said he was "worried" on Sunday evening, reminds many Brazilians that the leader of the Liberal Party has repeatedly threatened not to recognize the verdict of the ballot box if he loses. "Only God can snatch me from power," he had already proclaimed in 2021, subsequently insinuating on numerous occasions that he might not recognize the verdict of the ballot box if he was not re-elected. Already anticipating these difficulties, Lula asked the outgoing government on Sunday, October 30 to be "civilized" and to understand that "it is necessary to make a good transfer of power". According to Brazilian tradition, this should take place on January 1.

The transition period immediately got off to a tense start, hours after the vote, when truckers and pro-Bolsonaro protesters refusing to concede defeat blocked highways across the country, burning tires and parking vehicles in the middle of the road to stop traffic.

On Monday evening, October 31, Supreme Court Justice Alexander de Moraes ordered the police to immediately disperse the roadblocks, without success. “We are releasing one, and another is forming,” the federal traffic police chief told CBN radio. On Tuesday morning, November 1, blockages further intensified on Brazilian roads, with police reporting 250 roadblocks in 23 of the country's 27 states.

On social networks, calls for a rally in the Square of the Three Powers of Brasília, where the Presidential Palace, the Supreme Court and the Parliament are located, are increasing. Security has been tightened there, in anticipation of the possible arrival of pro-Bolsonaro demonstrators, according to the district's public security secretariat.

Lula da Silva's victory was hailed by world leaders, from Washington to Delhi to the European Commission. Many have expressed their impatience to renew solid and productive relations with Brasília, after four years of diplomatic isolation under Jair Bolsonaro.

The start of the mandate nevertheless promises to be complicated for Lula. The icon of the Brazilian left will have to govern with a divided population, opponents hanging on the reactions of Jair Bolsonaro as well as a hostile Parliament. "There are not two Brazils", proclaims Lula. The reality, however, seems much more complex.