Brazil: end of campaign in rallies for Bolsonaro and Lula

Jair Bolsonaro, 67, once again leads a procession of bikers in Belo Horizonte, capital of Minas Gerais (southeast), the second largest electoral district in the country after Sao Paulo. 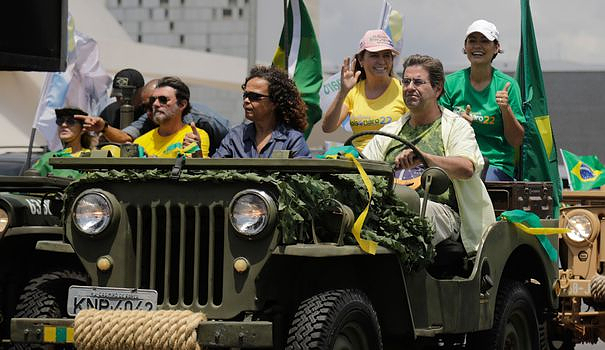 Jair Bolsonaro, 67, once again leads a procession of bikers in Belo Horizonte, capital of Minas Gerais (southeast), the second largest electoral district in the country after Sao Paulo.

"I'm sure he's going to win," Fabricia Alves, 36, a micro-entrepreneur who was waiting for the arrival of the president with other supporters dressed in green and yellow, in the colors of the Brazilian flag, told AFP. .

She says she supports the outgoing president for his economic policy and "for the values" of the family which she considers non-negotiable: "I am not in favor of abortion or gender ideology, which is what the 'other party wants to impose on our country,' she said.

In a country where voluntary termination of pregnancy is only authorized in rare extreme cases, Lula has nevertheless repeated, and again recently in front of leaders of evangelical churches, that he was "personally against abortion".

Friday during the last televised debate at loggerheads where the invectives flared ("bandit", "unbalanced"), the two protagonists accused each other of "lying" to the detriment of the exhibitions of concrete projects for the four years of mandate at stake in Sunday's poll.

"An anti-debate, without the slightest novelty that could change the situation," said political columnist Otavio Guedes on the Globonews channel.

According to the survey by the benchmark institute Datafolha published on Thursday, Lula is in the lead by four to six points (53%-47%). A final survey on Saturday will give the trend the day before the vote.

But the opinion polls had been singled out after the first round on October 2 for not having anticipated the narrowing gap between the two candidates who are hating each other: 48% for Lula against 43% for Bolsonaro.

Lula, who, at just 77 years old, is seeking to return to power after leading Latin America's largest economy between 2003 and 2010, before being imprisoned for 18 months for corruption, will carry out a "march of victory".

"Brazil needs a government that takes care of our people again, especially those who need it most. It needs peace, democracy and dialogue," Lula wrote in a letter to the voters, in which he attacks the country of "hate, lies, intolerance" embodied, according to him, Bolsonaro.

In the home stretch, Jair Bolsonaro welcomed the slow recovery in activity, with the recent drop in inflation and the decrease in unemployment which stood at 8.7% in September. And "this with a pandemic and a war that affects the entire world economy (...) There is still a lot to do," he wrote on his Twitter account.

On Sunday, some 156 million Brazilians are called to vote in the country's 26 states and the Federal District. In the first round, about 32 million (21%) did not move, however. These abstentionists are one of the challenges of this second round because only 6 million votes separated the two finalists on the evening of the 1st round.

Voting is compulsory in Brazil but the fine of 3.5 reais, around 0.50 euro, is not a deterrent.

The final vote count could be tight and increase tension and polarization in the country.

In the event of a defeat at the polls, the supporters of Jair Bolsonaro could, according to experts, show violent reactions, like the invasion of the Capitol in Washington after the defeat of Donald Trump in the American presidential election, in January 2021 .

The former American president has also supported candidate Bolsonaro, whom he calls the "Trump of the tropics", "a great and respected leader" who "also happens to be a great guy with a very big heart". On his own Truth social network, he lambasted his opponent whom he dubbed Lulu, a "radical left-wing crackpot who will quickly destroy your country and the immense progress made under President Bolsonaro".

Friday at the end of the debate questioned if he would accept a possible defeat, Jair Bolsonaro however declared that "the one who has the most votes wins". "It's democracy".