Brazil was hanging on to the reaction of its opponent Jair Bolsonaro, walled in silence since the announcement of the result and who has still not recognized his defeat. 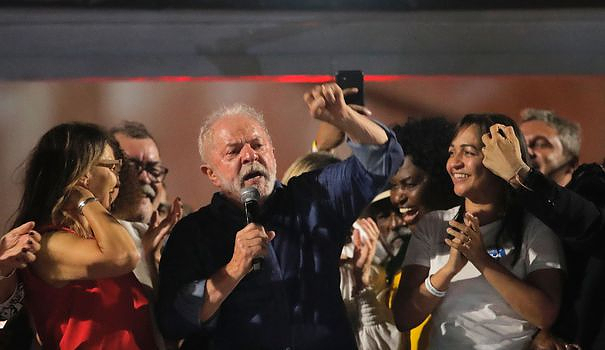 Brazil was hanging on to the reaction of its opponent Jair Bolsonaro, walled in silence since the announcement of the result and who has still not recognized his defeat.

The transition, which in Brazil lasts until January 1, will certainly not be an easy task.

The deafening silence of Jair Bolsonaro, defeated by a short head in the second round on Sunday (49.1% of the vote against 50.9%), and who must still govern for two months, is in itself fraught with threats.

"The worst that could happen would be for Brazilians to go to bed without hearing the position of their president (Bolsonaro), which would cast doubt on his acceptance of the result" of the election, Leandro Consentino told AFP on Sunday evening. political scientist from the private Insper University of Sao Paulo.

However, the lights of the Alvorada Palace went out early Sunday evening and according to Lauro Jardim, a generally well-informed columnist for the daily O Globo, the defeated president refused any visit after the result and went to bed.

During the second round of the presidential election on Sunday, Luiz Inacio da Silva, apparently already anticipating difficulties, had wished that "the (outgoing) government be civilized to the point of understanding that it is necessary to make a good transfer of power".

Then Lula will have to reunite and pacify a Brazil battered by four years of crisis management by his predecessor at the Planalto Palace and, moreover, cut in two by the most polarized and brutal campaign in its recent history.

"Half the population is unhappy" with the result, notes Mr. Consentino. “It is going to be essential that Lula has the ability to reach out to those who did not vote for him and tell them that he is the president of all”.

"Lula will have to pacify the country," said the analyst. This is what the veteran Brazilian politician promised on Sunday: "there are not two Brazils", he said, "we are one people, one nation".

"This country needs peace and unity", insisted the icon of the left because "no one wants to live in a family where discord reigns".

Lula will also have to deal with a Parliament that the legislative elections of October 2 have leaned more towards the radical right, the Liberal Party (PL) of Jair Bolsonaro having become the first formation in the Chamber of Deputies as in the Senate.

In presenting himself, Lula brought together a heterogeneous coalition of around ten formations around his Workers' Party (PT).

He also chose a vice-president in the center, Geraldo Alckmin, a former opponent defeated in the 2006 presidential election, to seduce the moderate electorate and business circles.

Within two months, the future president must make announcements concerning the composition of his government.

Lula is expected to welcome more diversity into his cabinet: women -- only one remains in the last Bolsonaro government -- people of color, and indigenous people, one of whom should take the helm of a newly created Ministry of Indigenous Affairs.

Lula's government will also have to restore resources to organizations monitoring deforestation in the Amazon, which have been greatly weakened by credit cuts, dismemberments and the total impunity of all kinds of traffickers.

"Brazil is ready to resume its leadership in the fight against the climate crisis (...) Brazil and the planet need a living Amazon," said Lula.

Another major challenge for the new president, at a time when he will have to finance the social policies promised and without the growth of his previous mandates: the finances of the Brazilian State have been weighed down after the distribution, for electoral purposes, of tens of billions of reais in aid during his campaign by Jair Bolsonaro.