Between secessionist threats from the Orthodox Serbs, frustrations from Catholic Croats who no longer want to coexist with Bosnian Muslims and dreams of a "citizen state" of a large part of the latter, many fear new turbulence after the election. 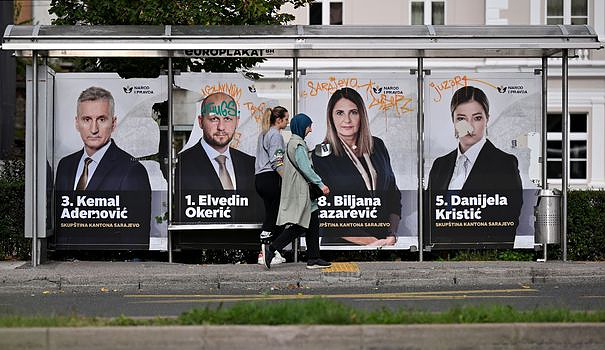 Between secessionist threats from the Orthodox Serbs, frustrations from Catholic Croats who no longer want to coexist with Bosnian Muslims and dreams of a "citizen state" of a large part of the latter, many fear new turbulence after the election.

The small, poor Balkan country is divided between a Serbian entity, the Republika Srpska (RS), and a Croat-Muslim federation, linked by a weak central power that is often paralyzed. This system is inherited from the Dayton agreements of 1995 (United States) which ended the war in which 100,000 people were killed.

"Priority is given to incompetent people, prone to corruption within parties that have established patronage relationships," Sara Djogic, a 21-year-old philosophy student in East Sarajevo, who is part of the RS. "They keep leading Republika Srpska and all of Bosnia and Herzegovina into the abyss."

In all three communities, long-time leaders engage in nationalist one-upmanship to hold on to power while all who can choose exile in the face of a lack of political and economic prospects. .

Nearly 500,000 people have left the country since the last census in 2013, when it had 3.5 million inhabitants, according to estimates by the Union for a Sustainable Return, a local NGO.

"I don't expect anything new after these elections, everything will be the same, the people will still vote in their camps, for theirs. I haven't voted for a long time," said Mira Sladojevic, a disillusioned retiree.

Nepotism favors the status quo, say many observers. According to analyst Zarko Papic, one million people depend in one way or another on the public sector (250,000 employees and their families) and constitute "a pool of voters for the parties in power".

In this gloomy atmosphere, voters begin to vote at 05:00 GMT to designate the three members of the Bosnian collegiate presidency, the deputies of the central Parliament and those of the two entities as well as, in Republika Srpska, the presidency.

Milorad Dodik, the indestructible political leader of the Bosnian Serbs and outgoing Serbian representative of the collegial presidency, is seeking the presidency of the RS. The 63-year-old nationalist has multiplied secessionist threats in recent months, which have earned him sanctions from Washington and London, while repeatedly repeating that Bosnia was a "failed" country.

Some analysts are betting on a victory for this great admirer of Russian President Vladimir Putin even if his main competitor, Jelena Trivic, a 39-year-old academic, assures the opposite. She also plays on the nationalist rope but promises to slay the kleptocracy established according to her by Milorad Dodik.

In the Bosnian community, Bakir Izetbegovic, leader of the main party, the nationalist SDA, is not to be outdone in the incendiary rhetoric to run for a third term in the Muslim seat of the tripartite presidency.

Son of the first president of independent Bosnia, he is playing a more difficult game than before against a candidate supported by eleven opposition parties. Denis Becirovic, a 46-year-old history teacher, campaigns for a "pro-European and united" Bosnia.

For their part, the Croats, who have threatened for months to boycott the election, are unhappy to have to share a federation with the Bosnians. All Croatian parties are calling for their own entity or at least a modification of the electoral rules.

These allow the Bosnians, who are a large majority demographically within the common entity, to de facto elect the Croatian member to the collegial presidency.

The outgoing Croatian co-president, Zeljko Komsic, standard bearer of a "citizen" state considered "illegitimate" by a large part of his community, will face Borjana Kristo, candidate of the nationalist HDZ. In case of victory of the first, some fear new tumults and institutional blockages.

Offices close at 5:00 p.m. GMT. In the absence of exit polls, preliminary results are not expected until late at night.