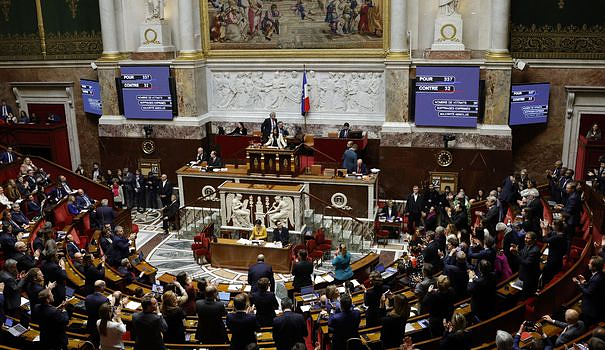 49.3, motion of censure, new 49.3 and announcement of a new LFI motion to close the evening: it is now commonplace at the Palais Bourbon, where the executive passes its budgetary texts without a vote due to the absence of a majority absolute.

"We cannot start the same discussions over and over again," argued Prime Minister Elisabeth Borne, engaging the government's responsibility for the expenditure side of the Social Security budget, in a new reading.

Just before, the Assembly had largely rejected a motion of censure LFI on the revenue part. It collected only 85 supporters - rebellious, communists and ecologists - very far from the 289 votes necessary to bring down the government.

But the discussions focused less on Social Security and its budget than on the atmosphere of tension that has reigned in the National Assembly for 24 hours.

Thursday evening, during the examination of an LFI bill, the names of birds rocketed in the hemicycle, until a "You're going to close it" launched by the elected Guadeloupean Olivier Serva (Liot) at the Renaissance group.

By suspending sessions and amendments, the presidential camp exasperated the opposition by preventing the vote on an unsubdued text in favor of the reintegration of caregivers not vaccinated against Covid-19.

She criticized the Macronists for their "hundreds of ridiculous sub-amendments" to slow down the debates.

LR Yannick Neuder in turn denounced the "chaotic situation last night", saying he was "appalled by the behavior of the majority and the government" and his "little game of obstruction", a "denial of democracy" .

And the ecologist Sophie Taillé-Polian castigated the "liquidation of Parliament before closing".

Elisabeth Borne first played the appeasement by calling not to "tilt into role-playing, even fistfights".

Then she went to the front against the "delaying maneuvers" of LFI which withdrew several texts to discuss its proposal on caregivers. "You do not appreciate that the majority masters the rules of procedure of your Assembly as well as you do," she told the opposition.

Throughout the day, the presidential camp and the opposition passed responsibility for the invectives exchanged the day before.

The Macronist deputies first demanded a sanction against Olivier Serva, before temporizing in a "desire to appease".

At LFI, Mathilde Panot wrote to the President of the Assembly Yaël Braun-Pivet to be indignant at the "governmental obstruction" against the reintegration of caregivers.

In an interview with La Voix du Nord, Ms. Braun-Pivet generally deplored the practice of parliamentary “obstruction”. "It's still the very negation of the debate," she said.

The President of the Assembly intends to talk about it on Tuesday morning with all the group presidents, during a meeting devoted to the grueling pace of work in the Assembly, where night sessions are increasing.

On France Inter, the Minister for Relations with Parliament Franck Riester judged that in the new Assembly, "it may be more violent" and that "behaviours should change". "But at the same time the texts are moving forward," he said.

"We cannot, when we behave like La France Insoumise for six months, play scared", he also dropped.

The debate on the Social Security budget has therefore been relegated to the background.

The National Assembly had only debated its revenue section for three hours. She had voted on the government's proposal for an additional envelope of 543 million euros for the hospital in 2022, due to "additional costs linked to Covid".

They are in addition to some 570 million euros for the hospital presented to the Senate at first reading, in particular to "deal with the early epidemic of bronchiolitis", had specified the Minister of Health François Braun.