Bordeaux: hundreds of winegrowers demonstrate for a grubbing-up premium

"Abandoned viticulture, misery in Bordeaux", "1,000 less winegrowers = 10,000 more unemployed", "To drink a cannon is to save a winegrower", can we read on the placards of the demonstrators, accompanied by many elected officials and local parliamentarians, including those of the majority. 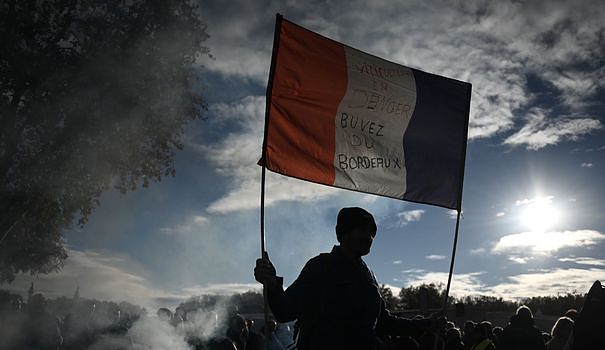 "Abandoned viticulture, misery in Bordeaux", "1,000 less winegrowers = 10,000 more unemployed", "To drink a cannon is to save a winegrower", can we read on the placards of the demonstrators, accompanied by many elected officials and local parliamentarians, including those of the majority.

The collective organizing the event is asking to uproot at least 15,000 hectares of vines with a bonus of 10,000 euros.

The largest AOC vineyard in France, with its 110,000 cultivated hectares, 85% of which are red, is in the doldrums.

The demonstrators observed a symbolic minute of silence in front of the CIVB, the local interprofession, and hung a "Stop suicide" model on a tree.

Small producers criticize the organization for insufficiently defending their interests.

The CIVB defends a lower grubbing-up target, around 10,000 hectares, and works with the public authorities for a grubbing-up solution conditional on agricultural reconversion, which most do not want to hear about.

"We are asking for a social plan because the people of Bordeaux are exhausted, they can no longer sell their wine," Didier Cousiney, head of the collective organizing the event, told AFP, for whom "the agony lasts. for 18 years".

The last demonstration of the winegrowers took place in 2004, a year of global overproduction which began to lower prices. The vineyard had then resorted to uprooting but on a limited surface (3,500 hectares).

“The current price per barrel for wine sold in bulk only covers 50% of the cost price,” he added.

Frédéric Salagnac, winegrower in Sauveterre-de-Guyenne (73 hectares) with his two daughters, is suffering from the closure of the Chinese market and the collapse of bulk prices, against a backdrop of falling wine consumption in France (-15 % for three years).

"It was planned for them to resume but we are not going to put a ball and chain on them, today we no longer live from our vines", he says. "For three years, it's been hell, we've been at the end of our rope."