Protesters were also still blocking roads on Wednesday in more than half of Brazil's states, but there were fewer roadblocks than the day before. 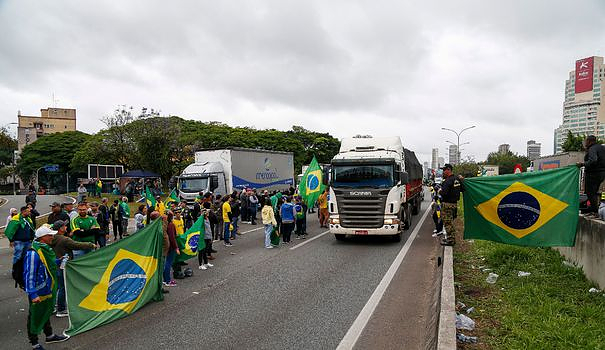 Protesters were also still blocking roads on Wednesday in more than half of Brazil's states, but there were fewer roadblocks than the day before.

These protests take place the day after the speech of outgoing far-right President Jair Bolsonaro.

He broke a heavy two-day silence to say he would "respect" the Constitution and gave the green light to the transition with his leftist successor Lula - while delivering an ambiguous message to his supporters who have been protesting since Monday.

In Sao Paulo, thousands of Bolsonarists demonstrated late Wednesday morning in front of the South-East military command, demanding an intervention by the Army to cries of "federal intervention immediately", noted an AFP journalist.

A similar demonstration in front of the army headquarters in Brasilia brought together thousands of protesters, according to an AFP photographer.

Same scenario in Rio de Janeiro, where demonstrators demanded the intervention of the army and sang in front of the military command "Lula, thief, your place is in prison", according to videos from the Brazilian press.

The flood of protesters was still growing in Sao Paulo, Brazil's largest metropolis, on this national holiday.

"We are asking for federal intervention because we demand freedom," Angela Cosac, a 70-year-old protester, told AFP.

"We cannot accept being ruled by a thief," she said, referring to Luiz Inacio Lula da Silva's corruption convictions, which the Supreme Court eventually overturned or barred.

The number of roadblocks nevertheless decreased on Wednesday: the Federal Highway Police (PRF) announced that they had recorded more than 167 roadblocks in the huge country, against 271 the day before, after Bolsonaro's speech on Tuesday.

The dams affected some 17 states in the country, compared to almost all of the 27 states on Tuesday.

"Peaceful demonstrations will always be welcome, but we cannot use the methods of the left, (...) which prevent freedom of movement," President Bolsonaro said on Tuesday.

However, he said the protests were "the result of outrage and a sense of injustice regarding the way the electoral process was conducted".

In Sao Paulo, a group of several dozen protesters authorized passage on only one lane in both directions of the main road linking this state, the economic lung of Brazil, to the center-west of the country.

But at the end of the morning the police were trying to clear this strategic axis.

The trucks honked their horns and on the tracks of the demonstrators dressed in the popular yellow and green T-shirt of the Bolsonarists waved banners in front of the vehicles which managed to pass, according to images from local television.

The PRF added that it had dispersed some 563 protests since Monday.

The police had to use tear gas on Tuesday to lift roadblocks, especially in the south, which voted mainly for Jair Bolsonaro.

Bolsonaro's speech was interpreted on radical right-wing social media as encouraging the movement to continue.

"The dream lives on," read a message on Tuesday on Telegram. “Come many in the streets tomorrow,” we read in reference to a call to demonstrate, especially in the afternoon on Paulista Avenue, in the heart of Sao Paulo.

Road blockages have led to supply difficulties in Brazil, which relies almost exclusively on road transport for the transport of goods and food products.

The National Confederation of Industries warned on Tuesday of the "risk of shortages and lack of fuel" if the roadblocks were not quickly lifted.

The G1 information site for its part estimated that 70% of supermarkets were already seeing supply shortages of certain products.