Blown away by the price of gas, the Arc glassmaker turns off furnaces and thinks of fuel oil

This oven is only one of nine in the huge Arc France factory, near Saint-Omer (Pas-de-Calais), the eighth largest French industrial site, according to the crystal factory. 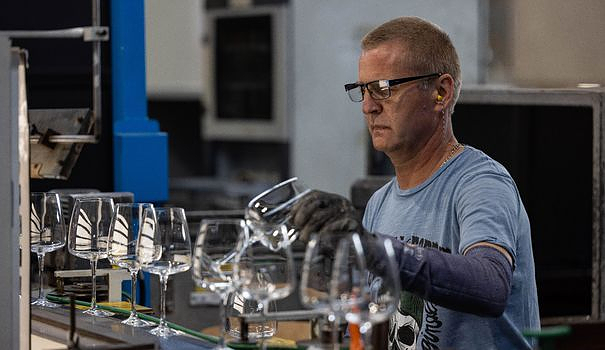 This oven is only one of nine in the huge Arc France factory, near Saint-Omer (Pas-de-Calais), the eighth largest French industrial site, according to the crystal factory.

A tireless shovel introduces a mixture of sand, soda and limestone, into a burning atmosphere. Like five other ovens on the site, it is gas-fired - the last three are electric.

Brought back to 1,300°C, the temperature at which it can be worked, the glass then passes through machines that blow, mold and weld.

An energy-intensive process?: 1.3 million MWh per year, nearly 80% of which is gas, for the entire plant.

Like other glassmakers, the venerable crystal factory founded in 1825, which has been struggling for several years but which had had a very good first half, must now adapt to the surge in gas prices resulting from the invasion of Ukraine. With nearly 5,000 employees in France, the stakes are high.

“We are at 200 euros per MWh whereas in 2021, we were buying it at around 13 euros”, summarizes its HRD, Guillaume Rabel-Suquet.

Combined with a fall in orders -? inflation is pushing consumers to refocus on the essentials? - this vertiginous rise forced the glassmaker to reduce its sails.

During the winter, three to five ovens will be shut down: two for repairs (but they will not be restarted), the others for the sake of economy.

For the remaining ovens, tests are being carried out on a possible temporary switch from gas to domestic fuel oil, in order to maintain part of the production, explains Mr. Rabel-Suquet. Because "today, the price of fuel represents about a third of the price of gas".

The situation, "completely new", "makes us resume operating modes of ten years ago", when the site abandoned heavy fuel oil for gas, completes the director of glass operations, Martin Debacker.

In early September, 1,600 support function employees were placed on partial unemployment. Management is soon to announce how many production workers will be this winter. She promises that there will be no layoffs.

"So many ovens shut down, it's a first that worries us a lot", insists the trade unionist (CFE-CGC) Patrice Bollengier, at Arc for more than 35 years.

Going back to fuel oil is "not trivial" he points out. "That means tanks, transhipments, pumps..." And "there is a big safety issue because the installations haven't worked for ages".

This decision will also affect the carbon footprint of the site, as recognized by Mr. Rabel-Suquet, who evokes "a peak" of CO2 "a little more important".

But Arc remains in the long term committed to a process of "reduction of 50 kt per year in CO2 production, 20% in gas consumption and 5% in electricity consumption" and is carrying out research to convert certain furnaces electricity, he insists.

In the neighboring North, another glassmaker, AGC, ensures that it invests in renewable energies (solar panels, hydrogen, etc.), but is also considering a short-term return to light fuel oil for its furnaces. The famous Duralex glassworks will put its oven on standby for four months from November.

Beyond purely energy measures, the company has embarked on an overhaul of its commercial strategy, to focus on products offering better margins. In this context, one of the nine furnaces must be definitively shut down at the beginning of 2023.

And she expects a lot of proposals from the European Union -? detailed Wednesday? - to stem the surge in gas and electricity prices.