He often crossed the intersection of Via Principalis and Via Praetoria in a tunic befitting his status: Prefect Lucius Pretonius Florentinus, around 200 AD commander of the cohort fort in Obernburg with 500 soldiers. 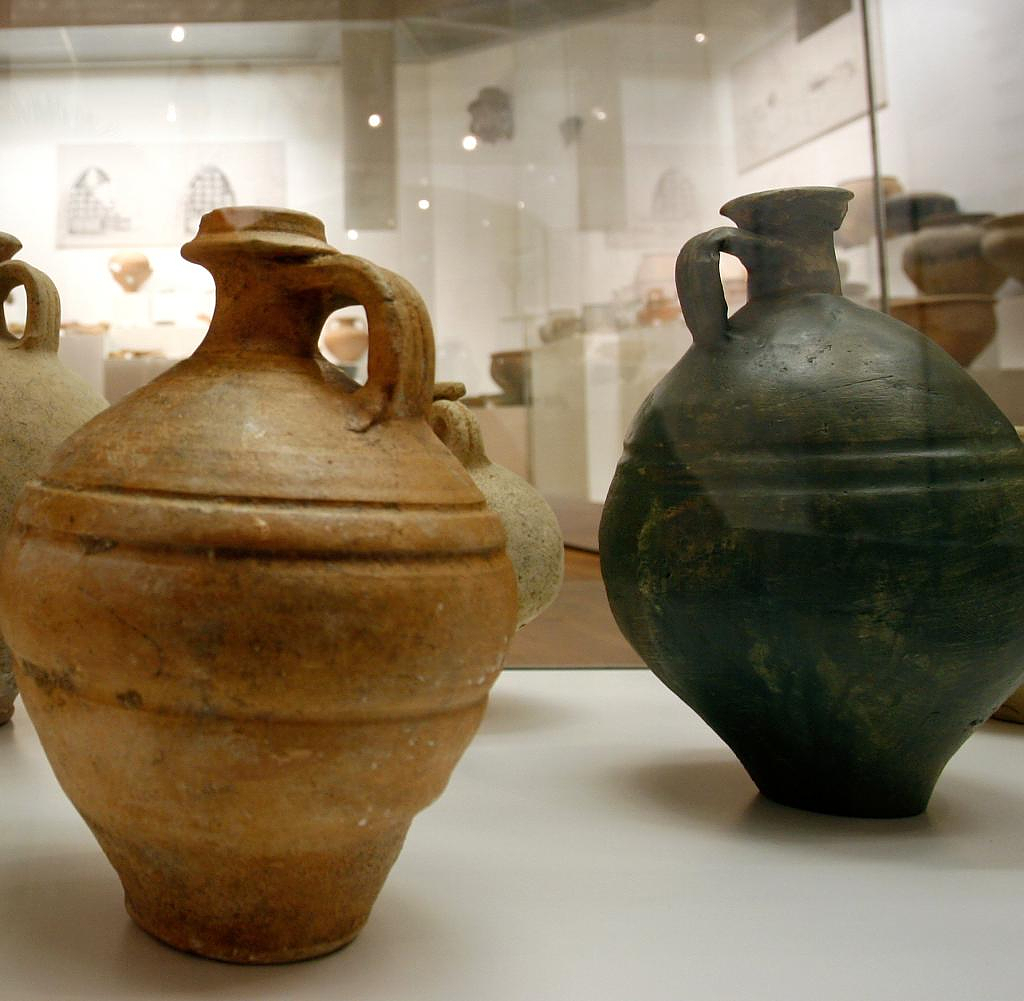 He often crossed the intersection of Via Principalis and Via Praetoria in a tunic befitting his status: Prefect Lucius Pretonius Florentinus, around 200 AD commander of the cohort fort in Obernburg with 500 soldiers. A thousand civilians settled outside the defensive walls, where there was a hustle and bustle: there were hostels, handicrafts, trade and services from hairdressers to brothels.

In 2022, Dietmar Fieger will walk from Römerstrasse to Badgasse. He wears a suit and tie, is the first mayor of Obernburg in Lower Franconia and takes a journey through time to the ancient world: "The former Via Principalis and Via Praetoria are located exactly below the Römerstraße and Badgasse, just like the entire Roman fort is located directly below the old town of Obernburg. "

A city on the city? In two layers, so to speak? This is exactly what the excavations revealed, a unique constellation in the entire former Roman Empire! The mayor is so fascinated by it that he sometimes even acts as a Roman city guide.

Since 2009, Alzenau, the north-westernmost town in Bavaria, has been offering its guests the opportunity to get to know the solar system and walk the Alzenau Planet Trail on a scale of one to two billion.

So you can find the sun with a diameter of 75 centimeters as a lantern ball (at the castle car park) and the earth with a diameter of 50 millimeters true to scale 80 meters further. For the last planets in the solar system, you have to walk 2.8 kilometers to Michelbach.

It is a mistake to carelessly drive past the Jungferkättl in Weißenbrunn. Because with the naked mermaid on the village fountain - a work by the Kronach artist Johann Dümlein from 1716 - there is something special about it: on every third weekend in September, when the church festival is in Weißenbrunn, beer instead of water flows out of the plump breasts of the sandstone sculpture .

The secret of the water-to-beer miracle is a direct line to the brewery through which the beer is pumped. With around 200 breweries, the administrative district of Upper Franconia has the highest concentration of breweries in the world and more breweries than any country in Europe.

It was a Franconian who invented jeans: Levi Strauss. Born Löb Strauss in Buttenheim in Upper Franconia in 1829, the son of Jewish parents emigrated to America in 1847, where he called himself Levi Strauss from then on. He went into his brothers' textile business and designed hard-wearing blue work trousers.

Workers and cowboys were the clientele, because the pants held up well. The first Levi's 501 was sewn in the early 1930s; the number goes back to the rivets, which were registered under number 501. It took another 20 years before Levi's became a fashion brand and teenagers became enthusiastic about the indigo blue pants.

The Buttenheimers, who found out about their famous son by chance through an inquiry from the USA, have set up a museum in the house where he was born, along with a shop where the current Levi's collections are available as well as the jeans classic 501.

A walled old town with towers and gates, narrow streets and wide squares, moats and ponds - Dinkelsbühl is one of the best preserved medieval towns in Germany. And so that visitors can also enjoy the magic of the city at night, Dinkelsbühl has had a city lighting system since 2013.

If you throw four euros into the machine, spotlights illuminate the sights of the Middle Franconian city. for an hour. It's a bit like Christmas - every evening from 10 p.m.

The Upper Franconian town of Mödlareuth is a symbol of the time when the wall and barbed wire divided Germany: on the GDR side, in Mödlareuth-Ost, the border installations were 700 meters long and three meters high. Behind it lay Mödlareuth-West; as a former part of the American occupation zone, this district belonged to the Federal Republic of Germany until 1990.

Since reunification, only an imaginary national border has run through the town, as it did between 1919 and 1945: After the end of the First World War, the western part of Mödlareuth became part of the newly founded Free State of Bavaria and the eastern part became part of the state of Thuringia. But this did not affect the everyday life of the Mödlareuther; The inn and school were in the Thuringian part, and we went to Bavaria together for church services.

After the Second World War, when Bavaria came under American administration and Thuringia under Russian administration, the invisible border in Mödlareuth became an impenetrable one. The German-German Museum Mödlareuth keeps the history of the place alive.

"Excuse me, is that the special train to Pankow / I just have to go there / just to East Berlin / I have to clear something up with your head Indian ..." The GDR chief Indian was called Erich Honecker, and in 1983 Udo Lindenberg actually drove for a concert to East Berlin. However, he was not allowed to play the song "Sonderzug nach Pankow" in front of the handpicked audience, and he was also denied a whole tour.

20 years later, Lindenberg personally painted and pasted the locomotive of a special train for the Day of German Unity under the motto "Special train to Pankow". After that, the locomotive did its regular rail service for a few more years before it ended up in the sidings of the Southeast Bavarian Railway in Mühldorf. There, railway enthusiasts discovered Udo's class 218 212 diesel locomotive and bought it for a symbolic euro; Today the locomotive is on track 1 in the adventure station in Amorbach in Lower Franconia.

“Why does a cemetery need a fence? If you're in, you can't get out, and if you're out, you don't want to get in!" said Mark Twain. The gate to the Old Jewish Cemetery in Miltenberg is chest-high and not a real barrier. But it separates the inside from the outside and death from life.

You can get the key for the little gate in the museum next door. Because the old Jewish cemetery is no longer used in the original sense; In 1904 the burial ground was closed for burials.

There are 136 tombstones in the cemetery, many of which are weathered and barely legible. But every grave is documented; Visitors can use the QR code on the cemetery stork to call up the documentation with a site plan and grave inscriptions on their cell phones.

35 years ago, the Lohr pharmacist and historian Karlheinz Bartels put forward the bold thesis that Snow White must have been a Franconian. The Grimm fairy tale character is based on the life of Freifraulein Maria Sophia Margaretha Catharina von Erthal, born in 1725 in Lohr Castle.

TV stations and newspapers jumped at the story, and Lohr am Main began marketing it as the “Snow White town” – right up to a number of hobby actresses who mime Snow White on a wide variety of occasions. Bartel's chain of evidence is long and stretches from the unhappy childhood of the Freifraulein in the castle, the Spessart as a wild forest, to the dwarfish miners in Biebergrund, 35 kilometers from Lohr.

And if that doesn't convince you - in the castle you can see the talking mirror: "Mirror, mirror on the wall, who is the fairest of them all?"

As simple as it is, the Dreifrankenstein is of great importance to the Franconians. The 2.5 tonne shell limestone rock standing in a clearing near Burghaslach marks the interface between Lower, Middle and Upper Franconia.

The three Bavarian administrative districts are the remnants of the once powerful Duchy of Franconia, which fell largely to the Kingdom of Bavaria in 1806. At that time, Bavaria had sided with the French Emperor Napoleon, who inflicted devastating defeats on Prussia with his troops. Napoleon's victories led to the collapse of Prussia - and at the same time sealed the end of the Frankish dominions, since Franconia had stood by Prussia's side

Many have longed for the Oktoberfest. After two years of the Corona forced break, Mayor Dieter Reiter is now tapping the first keg of Wiesn beer. This marks the official opening of the world's largest folk festival, the Munich Wiesn.

‹ ›
Keywords:
DeutschlandLänderporträtsBayernRegionenporträtsStraussLevi (18291902)PlanetenwegLevi StraussPankowBadgasseReiseDinkelsbühlRömerstraßeSpiegleinOberfrankenObernburgFrankeAmorbachLohrer SchlossMark TwainWeißenbrunnPreußenJochen MüssigMödlareuthVia PrincipalisMiltenbergVia PraetoriaAlzenauUnterfrankenButtenheimThüringen
Your comment has been forwarded to the administrator for approval.×
Warning! Will constitute a criminal offense, illegal, threatening, offensive, insulting and swearing, derogatory, defamatory, vulgar, pornographic, indecent, personality rights, damaging or similar nature in the nature of all kinds of financial content, legal, criminal and administrative responsibility for the content of the sender member / members are belong.
Related News