After three hours of discussions in the picturesque setting of the island of Bali, Joe Biden affirmed that a new Cold War was not necessary, while the Chinese leader assured that Beijing did not have the intention to "change the existing international order". 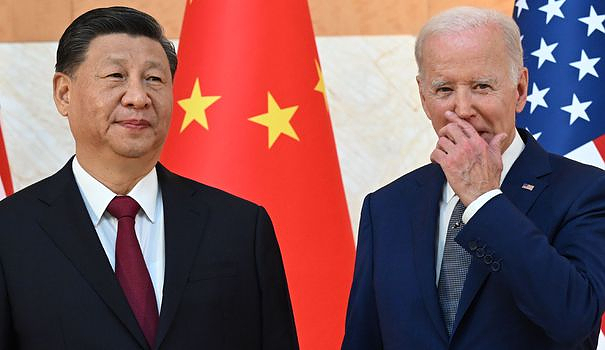 After three hours of discussions in the picturesque setting of the island of Bali, Joe Biden affirmed that a new Cold War was not necessary, while the Chinese leader assured that Beijing did not have the intention to "change the existing international order".

And the White House has indicated that US Secretary of State Antony Blinken will visit China early next year, which would be his first visit in more than four years.

The US president "sent a reassuring message and the Chinese report (of the meeting) was very positive, almost radiant. This in itself shows the interest of both parties in improving their relations", says Yun Sun , director of the China program at the Stimson Center in Washington.

But beyond this shared hope of avoiding a direct confrontation, the expert underlines that the two countries have divergent visions on what a stable relationship means, especially when it comes to Taiwan, and that it will be necessary to wait for "concrete measures" to judge a possible improvement in their relations.

Another expert, Rui Zhong of the Wilson Center, is more skeptical, describing the Bali meeting as a "maintenance" summit and saying he does not expect "real progress" during Mr. Blinken's visit. in China.

For their first face-to-face meeting since 2019, the two presidents did everything they could to strike a more conciliatory tone.

They are in Bali for a G20 summit on Tuesday and Wednesday.

The Chinese leader “had no interest in being excessively cold, inflexible or too warmongering in the face of Biden, at least in front of him”, notes Rui Zhong.

For Joe Biden, the immediate diplomatic priority was to continue to isolate Russia for its war in Ukraine, while Beijing has always refused to condemn the conflict.

The White House has indicated that Messrs. Biden and Xi had agreed "that a nuclear war should never be fought and can never be won," even though the Chinese statement did not mention nuclear.

Beyond the message sent on Monday, the two countries are deeply suspicious of each other.

In a U.S. national strategy paper released last month, the Biden administration said China "is the only rival that has both the will to change the international order and, increasingly, economic, diplomatic, military and technological means to pursue this objective".

In Washington, it is thus considered that China under Xi Jinping, strong in a third term, is positioning itself more and more openly to assert Chinese power in the world and is seeking to dislodge the United States.

Rush Doshi, Joe Biden's China adviser who took part in the discussions in Bali, already wrote in a book in 2019 that the Chinese strategy consists "in countering and trying to mobilize around the world to dislodge the United States from its place of leader".

But the big sticking point remains Taiwan, the island governed separately from the mainland since 1949 but claimed by the communist regime.

The Republican opposition to Joe Biden was quick to denounce the meeting, Senator Tom Cotton for example denouncing this "return to a naive policy of appeasement that will harm the United States, put Taiwan in danger and encourage Xi Jinping" .

Joe Biden admittedly claimed to have obtained assurances from Xi Jinping that an invasion is not "imminent". But Beijing repeated on Monday that Taiwan is "the first red line not to cross in Sino-American relations".

Tensions between Taiwan and China reached their climax in August, when Beijing organized unprecedented military maneuvers to protest against a trip to the island of the speaker of the House of Representatives of the United States, Nancy Pelosi.

Republican leader Kevin McCarthy, who could reach the perch of the lower house after the final count of the votes for the midterm elections on November 8, has clearly shown his intention to go there too.

Xi Jinping "might have some leeway not to overreact" to such a visit, according to Yun Sun. "Still, I doubt the Chinese can afford not to react harshly."