Post a Comment Print Share on Facebook
Famagusta
DOLLAR 18,65
EURO 19,72
GOLD 1.074,64
BIST 4.941,58
Four reasons why we need this robber
What these introductory sentences really mean
Federal states agree on rules for more control at ARD and ZDF
"When the unspeakable comes to light, it's political"
That devil is damn lucky
"The sentence 'I am as I am' is a license to ignorance...
The story of a double alienation
"There is more than one gender and fewer than two"
Maximum far away from Hollywood
Meta threatens to remove all messages from Facebook

He is one of thousands of his fellow citizens who have already crossed the border since the partial mobilization ordered last week by Russian President Vladimir Putin. 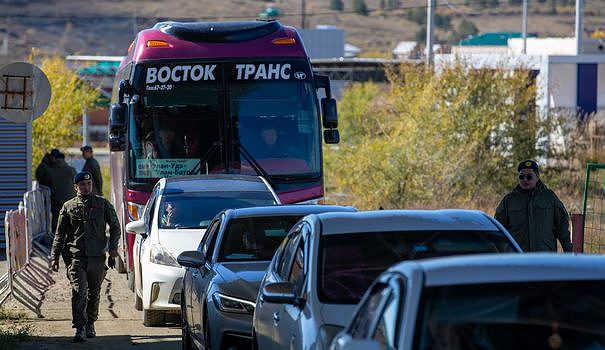 He is one of thousands of his fellow citizens who have already crossed the border since the partial mobilization ordered last week by Russian President Vladimir Putin.

The announcement caused shock waves in Russia, as well as an exodus of men of fighting age.

They took the direction of Finland, Norway, Turkey, Georgia but also Mongolia, with which Russia shares a long border of about 3,500 kilometers.

"It was very difficult to leave everything behind. My home, my homeland, my loved ones. But it's always better than killing people," the young Russian, in his twenties, told AFP. years.

He does not wish to reveal his name or show his face for fear of reprisals.

The young man says he chose Mongolia because the country is easily accessible from Russia. "I took my papers, my bags and left," he says.

On Russian social networks, many online groups help men escape mobilization, he says. Even if the situation can quickly change at the borders with the restrictions gradually put in place by Moscow.

The fear that Russia will close the borders has accelerated the decision of many Russians to flee. Even if the Kremlin declared Monday that no decision had been taken in this direction.

The head of a Mongolian border post in the town of Altanbulag told AFP on Sunday that more than 3,000 Russians had already entered the country through this crossing point since the announcement of the mobilization.

AFP journalists saw long lines of people with Russian passports outside the counter of Mongolian immigration officials at the border crossing.

Most Russians who arrive in Mongolia then go to Ulaanbaatar. The capital is located more than 350 kilometers from the nearest border post.

"At first, I thought I knew what was going on" in Ukraine since the start of the war, another young Russian told AFP.

"But with the actions of a certain government, when they started contradicting what they had said previously, I realized I couldn't trust them."

He says he plans to stay in Mongolia for a month.

Most of his friends could not leave because they do not have a passport, explains the young man, who hopes that his relatives, who have remained in the country, will not be threatened.

In Russia, many opponents of the war in Ukraine have been imprisoned or exposed in state media.

The Mongolian authorities remain neutral for the moment in the face of the Russian intervention, launched at the end of February.

Mongolia, a former satellite country of the Soviet Union, maintains strong ties with Russia in order to counterbalance the growing influence of its other big neighbour, China, in recent decades.

But last week, ex-president Tsakhia Elbegdorj urged Vladimir Putin to end the conflict. According to him, thousands of Russians of Mongolian ethnicity died in Ukraine, where they were used as "cannon fodder".