Better forests for a better climate

"Here we are in a beech forest, the way we like it," says Michel Quermann and takes a few steps from the hiking trail into the Wohldorfer forest. 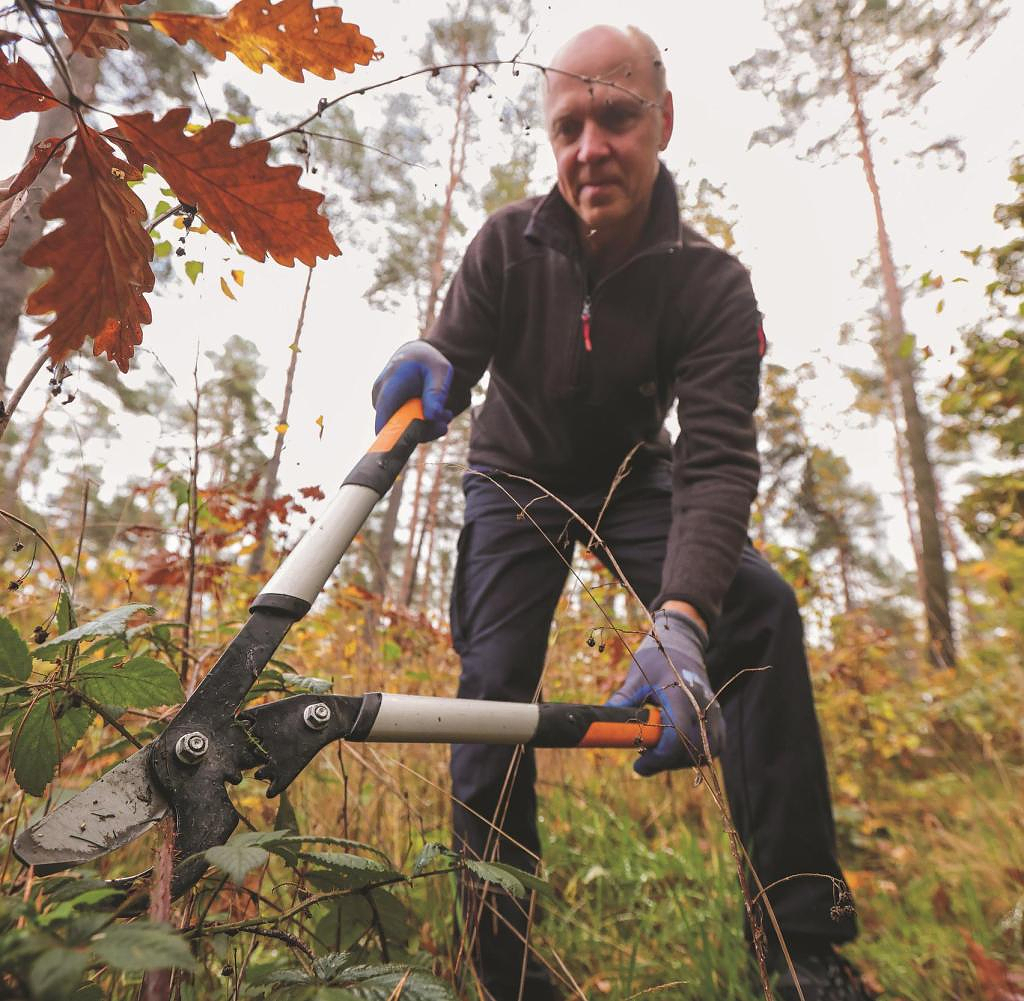 "Here we are in a beech forest, the way we like it," says Michel Quermann and takes a few steps from the hiking trail into the Wohldorfer forest. He estimates the age of the oldest and largest trees in the vicinity to be around 200 years – mainly beech and hornbeam, but also a few oaks and maples. In between there are smaller trees of these species, which Quermann estimates to be around 40, in some cases 60 years old.

The age of a tree in the forest cannot be precisely determined based on its size, explains the forestry expert at the environmental authority. Too many influences would influence the growth of the individual trees in the forest system. It is important, however, that the beeches and oaks, which are smaller today, could take the place of the old trees when their lifespan ends.

"You need trees of all ages," he says - that's why the Wohldorfer Wald in the north of Hamburg is in large parts exactly as forest experts and environmentalists like to have forest areas. Significantly more near-natural forests such as the Wohldorfer Wald would be needed in order not only to be able to cope with the growing challenges of climate change, but also to be able to actively contribute to cushioning its effects. Therefore, several forests are being converted in and around the Hanseatic city.

Because the forest in Wohldorf-Ohlstedt is more the exception than the rule. In the Klövensteen forest at the north-west end of the city, for example, there are large stands of spruce. In particular, the widely planted Sitka spruce, which comes from Alaska, finds it difficult to adapt to the changing climatic conditions in northern Germany. The increasingly warm and dry summers are causing problems for the trees, which only have superficial roots.

So weakened, pests like bark beetles have an easy job. In the past ten years, 250,000 new deciduous trees have been planted in Klövensteen to replace felled or dead spruce trees. Just last weekend there were two planting campaigns.

It's not just about the fact that trees with deep roots, such as beech or oak, are better able to cope with dry summers and, thanks to their leaf shedding, are also less susceptible to storms in winter and spring. They have the advantage over spruces, for example, that they allow groundwater to form much more easily because they help water seep into the forest floor better than in conifers.

"Evergreen trees that stand close together impede the seepage of precipitation," explains Arnd Wendland, head of the waterworks of the municipal water supplier Hamburg Wasser. Hamburg, which cannot meet its water requirements from its own sources alone, is therefore converting forest areas in the Lüneburg Heath, where Hamburg gets part of its water from.

Three years ago, for example, Hamburg Wasser planted a total of 7,130 young oak trees in Döhle together with the Lüneburg Heath Nature Conservation Park association. The care was now on for them. The trees that accompanied the growth of the oaks in the early years have been pruned or felled to allow the young oaks to continue growing.

The forest area is close to the sources of the Hornbach, which are fed by groundwater that lies just below the surface and has no contact with deep water sources that are filled all year round. If there is too little rain, the springs threaten to dry up. “Hardwoods like oaks, which lose their foliage in the fall and have smoother trunks, ensure higher groundwater recharge in the fall and winter months. This leads to more even outflow into the source streams and stabilizes their water bodies," explains Wendland.

Experts believe that each planted deciduous tree promotes the formation of 200 liters of groundwater every year. Compared to a coniferous forest, a deciduous forest creates the additional formation of around 800,000 liters of groundwater per hectare per year. Also, forest soils are considered to be giant sponges that can even help with flood control. Because rainwater seeps away quickly in forest soils. Even with heavy rain, there is significantly less water on the surface that could develop into a rushing stream.

Forest conversion is therefore a big keyword - also for federal politics. Federal Minister of Agriculture Cem Özdemir wants to develop a new forest strategy for Germany by 2024. This should result in a new federal forest law that puts the protection of the forest ecosystem at a higher level than the current law, most of which dates back to the 1970s. It is not for nothing, however, that the draft law is created in the Ministry of Agriculture and not in the Ministry of the Environment. It is not just about protecting the forest, but also about protecting its owners.

The forest in Germany is a major economic factor. Forest owners are demanding financial support to adapt their forests to climate change. Since the beginning of this week, they have been able to apply for money from the federal government to make their forests more natural and to manage them. "Climate-adapted forest management" is the name of the funding program for which 200 million euros are available every year.

Michel Quermann has known the discussions for years. He is now in the Wohldorfer forest directly in front of the part that has been declared a Bannwald, i.e. a piece of forest that is left to its own devices. What sounds like a barrier with large warning signs is actually only noticeable at second glance. There is a fallen tree to the right of the trail. Mushrooms and moss have grown on it, the roots reach far into the sky and the crown has grown a few meters with the rest of the vegetation. A sight not seen in forests where the oldest trees are regularly felled and sold as timber.

"When we talk about the forest and what should happen to it, we basically talk a lot about what people expect of the forest," says Quermann. The forest is sometimes important as a source of wood, sometimes as a local recreation area. There is nothing wrong with both, especially the latter, says the forestry expert. On the contrary: "How are you supposed to learn to love the forest and want to protect it if you can't experience it with all your senses?" Quermann asks.

Nevertheless, there must also be forest areas in which people hardly ever intervene. Hamburg is implementing this with a natural forest structure project that started in 2020. More than ten percent of the Hanseatic city's forest areas are part of the project and are no longer managed, i.e. no longer used for timber harvesting.

In the areas designated as protected forests, damaged trees are not felled and dead trees are left standing. There is just as little replanting as there is tree pruning or the removal of individual plants so that others can grow better. Hunting alone continues to keep the wild population within a range that does not damage the forest by browsing or peeling off bark. In the rest of Hamburg's city forest, too, close-to-nature management is being promoted.

A role model comes very close by. The city forest of Lübeck has been managed with a natural forest approach since 1992. Even in Russia, China, Finland, Sweden, Canada, Chile and Spain there are said to be concepts based on the Lübeck model. Knut Sturm is the area manager for the city forest.

In a video that he produced for the city forest's website, he explains his approach: As in the protected forests in Hamburg, the Lübeck city forest is being left almost entirely to its own devices. Trees are felled and sold only occasionally, depending on what brings the most money on the timber market.

Successes can be seen in Lübeck, for example, in the resilience of the forest to the effects of climate change. Neither the dry years nor pests such as the bark beetle caused any major damage to the Hanseatic city's forests. A goal that would also make Hamburg happy.

‹ ›
Keywords:
WittegenanntVedderJuliaHamburgWälderKlimawandelForstwirtschaftHolzwirtschaftWohldorfer WaldBuchenwaldMichel QuermannLübeckForst KlövensteenLüneburger HeideBispingenUmweltministeriumBäumeNaturschutz
Your comment has been forwarded to the administrator for approval.×
Warning! Will constitute a criminal offense, illegal, threatening, offensive, insulting and swearing, derogatory, defamatory, vulgar, pornographic, indecent, personality rights, damaging or similar nature in the nature of all kinds of financial content, legal, criminal and administrative responsibility for the content of the sender member / members are belong.
Related News