One of the faces of the contestation of the regime of President Alexander Lukashenko after the presidential election of 2020, "Maria was hospitalized in intensive care in Gomel", in the south-east of Belarus, indicated in a press release the press service of Viktor Babaryko, another imprisoned Belarusian opponent of whom she was the right arm. 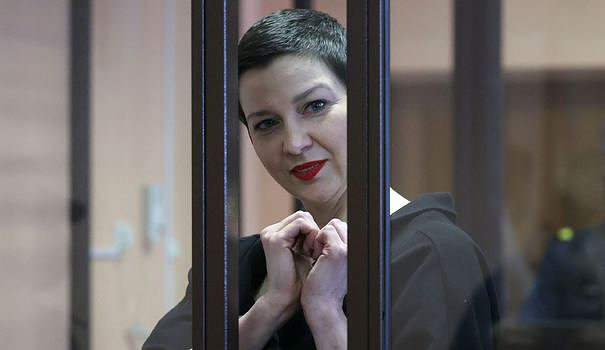 One of the faces of the contestation of the regime of President Alexander Lukashenko after the presidential election of 2020, "Maria was hospitalized in intensive care in Gomel", in the south-east of Belarus, indicated in a press release the press service of Viktor Babaryko, another imprisoned Belarusian opponent of whom she was the right arm.

According to the press release, Ms. Kolesnikova, 40, was hospitalized on Monday in a surgical care unit, before being transferred to intensive care.

This hospitalization comes as last week, Mr. Babaryko's press service announced that the opponent had been placed in solitary confinement, under the pretext of "impolite behavior". His lawyer had been refused access to the opponent.

"Terrible news! Our dear Masha (short for Maria, editor's note), we all hope you are well," Belarusian opposition leader in exile Svetlana Tikhanovskaya wrote on Telegram on Tuesday.

A major figure in the challenge to the Belarusian regime in the summer of 2020, Maria Kolesnikova was sentenced in September 2021 to 11 years in prison, following a trial behind closed doors, the Belarusian justice having found her guilty of " conspiracy to seize power", "calls for actions undermining national security" and "creation of an extremist formation".

His co-defendant, lawyer Maxime Znak, was given a 10-year sentence in a high-security penal colony.

Ms Kolesnikova had been jailed in September 2020 after spectacularly resisting an attempt to deport her from her own country.

- Rewarded for her "courage" -

According to her relatives, the Belarusian special services (KGB) abducted her, then put a bag over her head to take her to the Ukrainian border. Refusing to leave Belarus, she jumped out of a window and tore up her passport, which prevented her deportation but resulted in her imprisonment.

Maria Kolesnikova and Maxime Znak worked for Viktor Babaryko, a rival of the Belarusian president sentenced in 2021 to 14 years in prison for fraud, a case he denounced as political.

They also belonged to the seven-member Coordination Council set up by the opposition after the August 2020 presidential election to try to organize a peaceful transition after more than 25 years of rule under Alexander Lukashenko.

Ms. Kolesnikova was one of three women propelled to the head of the protest movement, with Svetlana Tikhanovskaïa, presidential candidate in place of her imprisoned husband, and Veronika Tsepkalo.

The latter two fled the country under pressure from the authorities.

A few weeks after Maria Kolesnikova's conviction, the Council of Europe awarded her the 2021 Vaclav-Havel Human Rights Prize, hailing her "courage".

The protest movement, which had brought together tens of thousands of demonstrators in the summer of 2020 in Belarus, had been gradually put down, with thousands of arrests, forced exiles and imprisonment of opponents, media officials and officials. NGO.

The West has adopted several sets of sanctions against Minsk, which, on the other hand, enjoys the unwavering support of Moscow.

Allied with Russia, Belarus served as a rear base for Russian troops for their offensive against Ukraine in late February, but the Belarusian army has not taken part in the fighting on Ukrainian territory so far.