Baza expands its cultural offerings with the exhibition "Iberos". Our Civilization before Rome>> 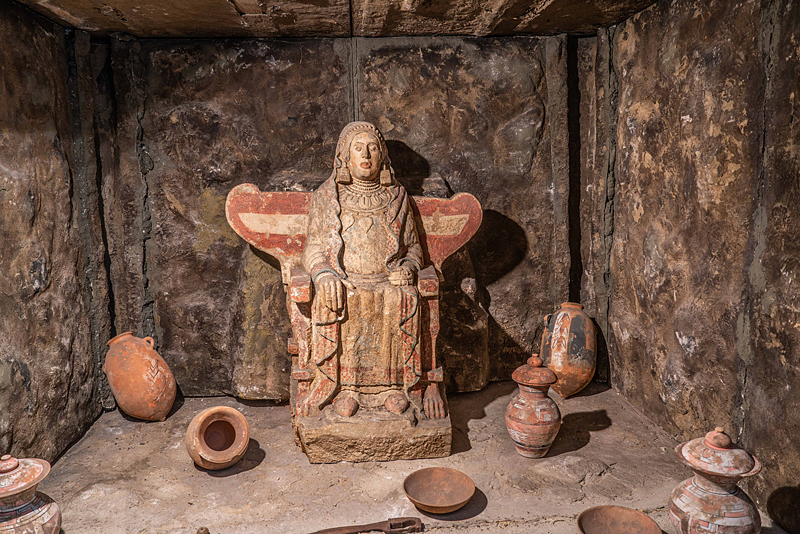 The opening of this new resource comes at a crucial moment. It is close to the 50th anniversary for the discovery of Lady of Baza. This year, which will also mark the 50th anniversary of Lady of Baza's discovery, has left in the city new cultural and tourist assets. These include the upcoming musealization on Cerro Santuario of the tomb of 155 and the traveling exhibition "50 Looks of a Lady", both of which will become a reality by the end of the year with the support of the Provincial Council of Granada.

The mayor of Baza, Manolo Gavilan, highlighted this at the ceremony's opening. Fatima Gomez was also present as the provincial deputy for Culture and Historical Memory. Fatima Gomez was also there. Amador Carmona was the commercial director of Caixabank North Eastern Andalusia. Manuel Peregrina was the technical secretary of the Spanish Network of the Phoenician Route.

It is intended to be inclusive, open to all who wish to see it, and have significant economic and cultural impacts on the municipality. Fatima Gomez (provincial deputy for Culture and Historical Memory), stated that "Baza has used its uniqueness to distinguish itself and become the benchmark in Iberian culture and Andalusia."

Baza's mayor thanks again the Jaen City Council and Julio Millan, its mayor, and Fundacion La Caixa, for transferring this exhibition. This exhibition was originally an itinerant character that has toured 67 venues in the country and been seen by 1.8million people.

The 400m2 exhibition covers a variety of aspects of Iberian culture. It includes scale reproductions and faithful reproductions, among others, of key Iberian references such as the Lady of Baza's tomb. This helps us to understand and contextualize the culture in which the ancient Basti was a key figure.

The diaphanous temple of San Jeronimo has a 408.18 m2 area in its central nave. To this must be added 163.05m2 of its sacristy and lateral chapels, as well as another 108.20m2 of its choir. It is intended that the exhibition will be something that is alive and not end in one visit. Instead, it will offer new attractions through temporary exhibits. It will be attractive for educational centers due to its didactic nature.

Baza has an important museum and interpretive fund. It consists of two large facilities, the Municipal Archaeological Museum of Basti (MAB), and the Basti Archaeological Sites Interpretation Center of (CIYA), both of which were inaugurated in 2011. The permanent installation of the exhibition was made possible by the addition of the monastery church San Jeronimo, which is owned by the Baza City Council. It has been desecrated for many decades and is now used to provide cultural facilities. This temple is part of the monumental complex that the Monastery of San Jeronimo and Church of San Jeronimo have created. It was declared BIC by Decree 170/2017 of Oct 24. It is attached the Palacio de los Enriquez. This Palacio has waited for decades for the Junta de Andalucia, to prepare the restoration plan and to provide the budget necessary to carry out the works. Despite the motions approved by the Andalusian Parlament, it seems unlikely that this will happen in the coming years.

‹ ›
Keywords:
BazaAumentaOfertaCulturalExposicionIberosCivilizacionRoma
Your comment has been forwarded to the administrator for approval.×
Warning! Will constitute a criminal offense, illegal, threatening, offensive, insulting and swearing, derogatory, defamatory, vulgar, pornographic, indecent, personality rights, damaging or similar nature in the nature of all kinds of financial content, legal, criminal and administrative responsibility for the content of the sender member / members are belong.
Related News