Battle of the Bees! The most impressive animal and nature photos of the year

There's something wondrous about nature - and occasionally, nature photographers manage to capture those wonders. 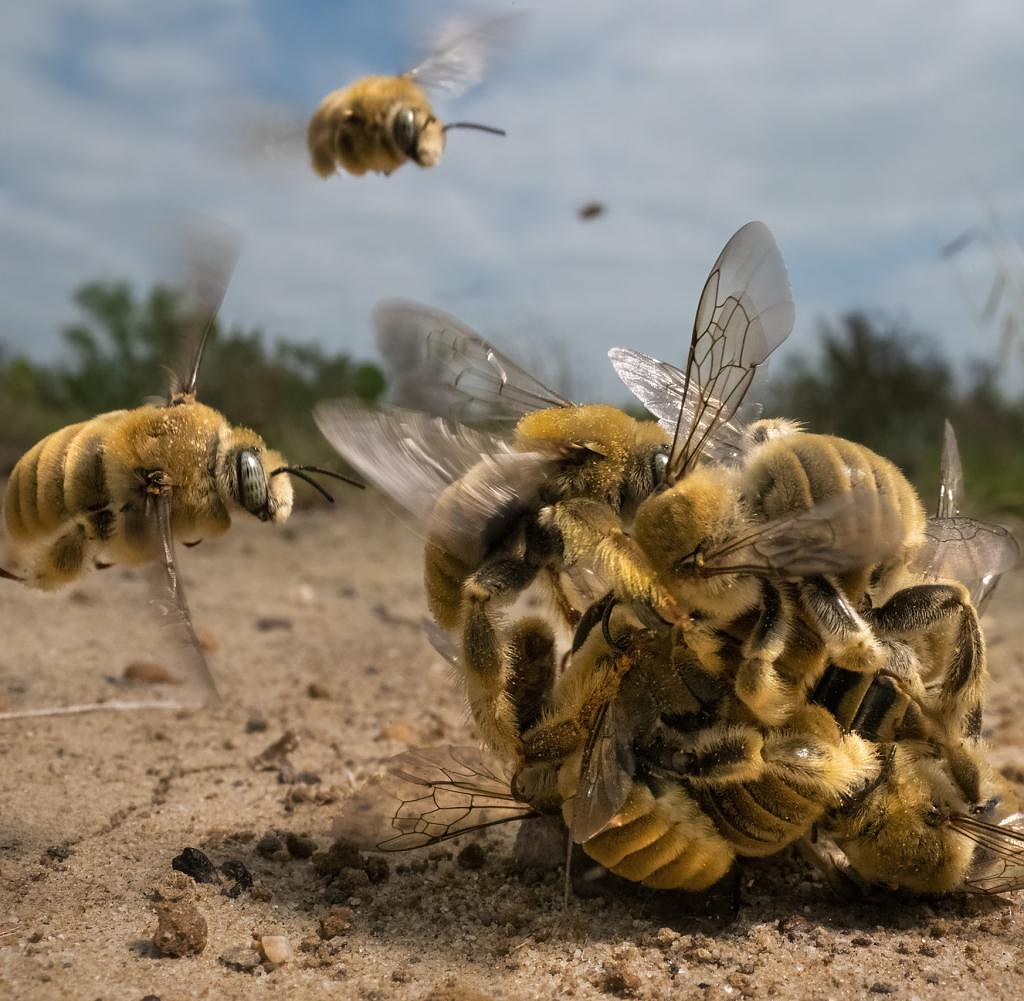 There's something wondrous about nature - and occasionally, nature photographers manage to capture those wonders. The Wildlife Photographer Awards make that clear. For the 58th time, the British Natural History Museum in London has chosen the most touching, breathtaking and exciting animal and nature pictures of the year. Ready for a journey across land, water and mountains? Here we go!

We must have missed this scene in the film "Bee Movie - The Honey Plot"! Several male bees in southern Texas wrestle with each other to mate with a female.

With this dynamic shot, the American Karine Aigner was able to assert herself as the best nature photographer of the year. She is just the fifth woman to win the award since the Wildlife Photographer Awards began 58 years ago.

It's like the swarm of bees "rolling right into the frame," according to Roz Kidman Cox, chair of the competition jury. "The movement and intensity is exhibited at the bee level, turning the small bees into major competitors." practices that endanger their nesting sites are threatened.”

"The beauty of the baleen whales": That's what 16-year-old Katanyou Wuttichaitanakorn calls the picture he took on a boat tour in the Gulf of Thailand. According to the Natural History Museum, the photographer was struck by the color contrast between the whale's gray bristles, pink palate and dark skin.

According to the jury, taking such a photo is not an easy task. According to tourist boat guidelines, the tour boat's engine had to be turned off in the vicinity of the whales. So, to take the close-up, Katanyou would have had to keep his hands still while the boat swayed due to the swell.

The Wildlife Photographer Awards are developed and produced annually by the Natural History Museum in London. The Danish offshore wind energy group Ørsted has been sponsoring the competition since 2014.

This year's winners were chosen in 19 different categories, including three awards for young nature photographers. A total of 38,575 entries from 93 countries were evaluated by an international jury of experts based on the criteria of originality, narrative, technical excellence and ethical approach.

Anyone who wants to see the images live can do so between October 14, 2022 and July 2, 2023 at London's Natural History Museum. The exhibition will also be presented in other cities in the UK and internationally in Australia, Canada, Denmark, Germany, France, New Zealand, Switzerland and the USA.

And if the natural spectacles above have piqued your interest, you can submit your images for the 59th Wildlife Photographer Awards from October 17 this year. We are excited!

‹ ›
Keywords:
NaturFotografieTiereUmweltTierfotografieKmpktTier (kmpkt)TexasNatural History MuseumKarine AignerTierverhaltenNeuseelandThailandBieneVereinigte KönigreichLondonReisePhotographer AwardsUSA
Your comment has been forwarded to the administrator for approval.×
Warning! Will constitute a criminal offense, illegal, threatening, offensive, insulting and swearing, derogatory, defamatory, vulgar, pornographic, indecent, personality rights, damaging or similar nature in the nature of all kinds of financial content, legal, criminal and administrative responsibility for the content of the sender member / members are belong.
Related News