Basketball World Cup: for the Blues, headwinds and leap into the unknown

Coach Jean-Aimé Toupane probably thought he had reached the end of his troubles at the end of August after the package of Sandrine Gruda, top scorer in the history of the France team and captain in the absence of Endy Miyem. 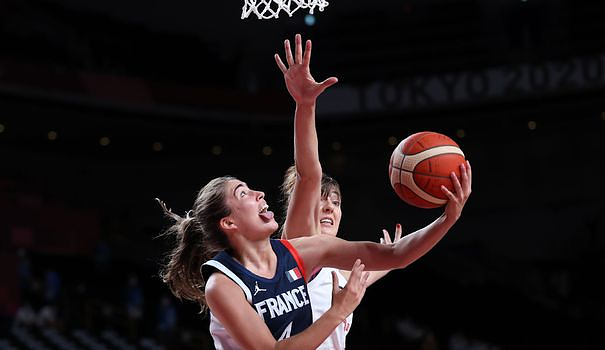 Coach Jean-Aimé Toupane probably thought he had reached the end of his troubles at the end of August after the package of Sandrine Gruda, top scorer in the history of the France team and captain in the absence of Endy Miyem. Which she had given up, also on injury, even before the summer, like the leader Alix Duchet and, for personal reasons, the winger Valériane Vukosavljevic.

It was without counting on the fate which seems to be beating down the Blues and struck Monday afternoon, during the final gallop of training against the United States: the rear Marine Johannès, main offensive strike force in the absence of Gruda, suffered a "muscle injury to the right thigh", according to the statement from the Federation.

She must therefore in turn forfeit and the French team finds itself amputated by half of the bronze medalists at the Tokyo Olympics in the summer of 2021.

"It's difficult for everyone. We know very well the importance she has for the team. She is a player who scores a lot, who plays with the ball. We will never replace her. Obviously the game will be different, but it is not in 48 hours that we can change a lot of things", laments Toupane.

The coach, who calls "each one to raise their level of play a little to compensate" and to "be even more united in defense", hopes that the withdrawal of Johannès (replaced by Mamignan Touré) "will bring the team together even more for stand up, give us character".

"We'll see if we're a real team or not. When everything is smooth, easy, it's not fun," adds interior Alexia Chartereau.

Les Bleues laugh yellow and therefore approach the competition with the outsider sign even more visible than it was before the withdrawal of the rear of Lyon-Villeurbanne.

"Of course, no one is waiting for us," agrees Marine Fauthoux, leader of a team with a renewed workforce and style of play.

Despite the Olympic bronze, the Federation has indeed decided, with a view to the 2024 Olympics in Paris, to give new impetus by replacing coach Valérie Garnier with Toupane, a follower of a more athletic game.

The transplant struggled for the first few months, with defeats to Ukraine in the fall and then to Nigeria and China in February.

But Toupane, who had never previously trained with women at a high level, and the Blues assure it: thanks to the time granted by the preparation, the new principles of play are being put in place.

In any case, Les Bleues will have to be ready quickly to get out of a very tough group composed in particular of two opponents against whom they lost in a friendly a few days ago, Australia (92-88 defeat), and Japan (69 -59).

The Japanese had blocked the road to the last Olympic final to France (87-71), which will find another of its recent executioners at the World Cup: Serbia, in the final of Euro-2021 (63-54).

Canada, regular at the highest level, and Mali complete this group which, after an obstacle course of five matches in six days, will take one of the first four places to see the quarters.

And if possible avoid the fourth so as not to cross paths with the American ogre, three-time defending champion.

"I hope we will create a surprise, breathes winger Gaby Williams. We don't have a lot of pressure because we are young. We will try to enjoy, to take advantage, and when you play like that, good things happen."