Above the empty landscape, a pale sun is visible on the horizon, small drifts of snow on the fence posts along the way. 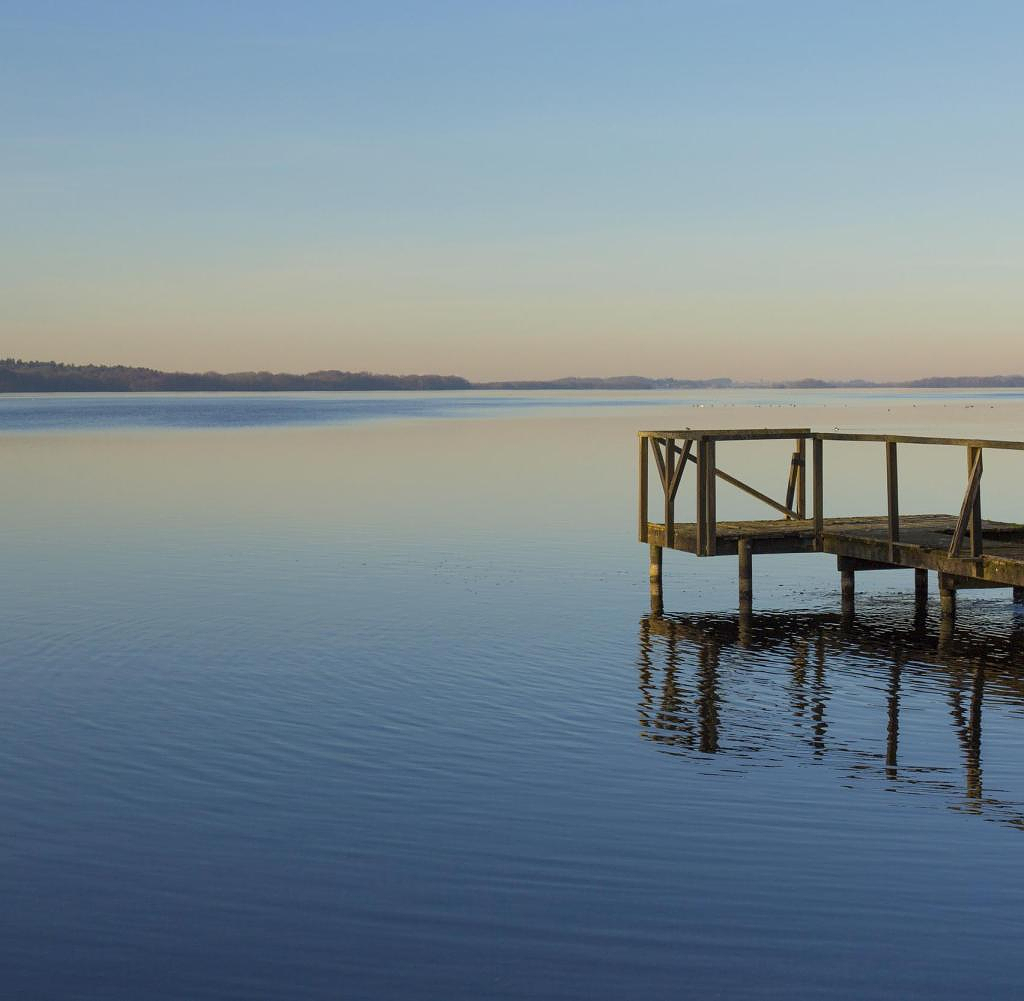 Above the empty landscape, a pale sun is visible on the horizon, small drifts of snow on the fence posts along the way. Indifferent and gray lies the water of the lakes. The path ends in Bosau, a small hamlet on the Great Plöner See. A special church stands above the water and under mighty bare trees. In a place that was perhaps a Wendish place of worship, a sacred place even before the Christians.

After the heavy door of St. Petri has fallen shut, the visitor is greeted by an embracing calm and the scent of candles. Remains of Gothic fresco paintings, the winged altar, painted panels on the gallery, the triumphal cross and the ancient baptismal font tell of many centuries of history. Feeling safe while the winter wind is blowing outside and you're silently amazed.

From here they once set out to bring Christianity to the far north along today's Mönchweg. 800 years ago, with an uncertain outcome. They drove off and they didn't know where to go. Maybe that's why this beautiful church, a gem like others on the path of pious men, has this strange atmosphere of security and departure, of good faith and confidence. A place to pause for sure and also one of inner refueling.

Ostholstein has a few more of these beautiful churches to offer along the way to the north - for example the Hospitalkirche zum Heiligen Geist in Neustadt, the Altenkrempe Basilica, the pilgrimage church of Kirchnüchel, the monastery in Cismar. But St. Petri in Bosau is at its most beautiful when the wind carries the sound of the bells over the forest and water.

When the masters of marzipan stand at their cauldrons, it smells like almonds. And also after rose water? The exact ingredients are a closely guarded secret. Say Lübeck and people think of marzipan. A delicacy whose ingredients probably came from the Orient to the Baltic Sea in the Middle Ages - Lübeck's Hanseatic merchants had trade connections throughout the world.

Even today you can drift in front of a historical backdrop and be tempted by delicious aromas. Just a few streets before the Neue Rösterei, the smell of coffee can be smelled. Up until the 1950s, coffee and tea was traded there on Wahmstrasse – and today coffee is roasted in the old brick building.

The hand-picked beans go into the roaster several times a week, and then not only the aroma of coffee wafts through the dining room, but also a bit of longing for the distant countries from which the coffee comes – Ethiopia and India, Guatemala and Brazil.

Lübeck has even more good smells to offer: If you walk across the pavement in front of the old gabled houses, you can smell the scent of freshly baked bread, you come to the "Freibackhaus", which claims to be the oldest bakery in Germany. More than seventy generations of bakers have been baking bread here since 1293. Today, this is done in this manufactory, in a very contemporary way, by the members of an organic cooperative.

At the Hansekai you then board the ferry, down the Trave to its mouth. Stands at the railing, head in the wind, and sees the big ships. They don't go to the distant coffee countries, but to Sweden and up to Finland. Far enough to satisfy the longing for the sea.

If the frost was severe, the fishermen set off from Fischland on mopeds and rattle poles; out on the ice, out on the Bodden. Most recently, Andreas Schönthier and his colleagues fished in this way in the ice winter of early 2016, by hacking a hole in the ice with an axe out on the inland water, hitting the ice with clubs - to scare zander and pike out of the hibernation - and finally pushed the nets under the ice with the pole. They then pulled the catch ashore on a sled with their moped.

When the Bodden is not frozen, their small boats leave the dreamy harbor of Althagen even in winter; fresh fish is available here all year round.

Andreas Schönthier from the "Räucherhaus" restaurant (and the snack bar "Fischkaten") in Ahrenshoop-Althagen also has a boat out on the Baltic Sea beach. If the swell allows it, they go out to sea in their open boat, even in winter, catching flounder, cod or herring, depending on the situation.

After the trip, the boat is pulled back up onto the sand with the cable winch. There is no port on this coast between Rostock-Warnemünde and Stralsund, apart from the emergency port Darßer Ort. It's a wild world, and it seems a little lost in the world.

The restaurant "Räucherhaus" at the port of Althagen is all the more inviting. Warm light, lots of wood, a few fishing utensils on the ceiling and wall, very cosy. Here, the Schönthier family serves fish from the Bodden and the Baltic Sea, along with home-brewed beer. They also smoke here themselves: eel, mackerel, and fresh pike-perch too – you can order them in advance and enjoy them straight from the smoke.

"We were on a winter hike in the Rostock Heath, and then the hiking guide asked us to close our eyes and take a look," Martin Neumann recalls. "It rustled and cracked in the forest, and there was an intense smell of citrus fruit with the scent of fir." But lemons don't grow there, what smelled so fragrant were crushed needles of the coastal fir. "What a surprise, what a strange combination of flavors!"

Martin Neumann produces and trades in spirits, so it wasn't long before the people from the "Maennerhobby" spirits distillery in Klein Kussewitz near Rostock got to work and created a new drink with the needles: Foerster's Heide Gin. "The largest contiguous coastal forest in Germany is on the Rostock Heath," says Neumann.

And coastal firs also grow here. They harvest the pine needles at an approved spot on the heath. Once a week they fetch a sack full of branches from the forest and pluck off the needles by hand. The needles are inserted, and there are also extracts from herbs such as juniper, cinnamon and lemongrass, cubeb pepper and arnica - "and a few more secret ingredients," says Martin Neumann. The art is to create a harmonious and coherent interplay of flavors that reflect the local flora and the character of the region.

It succeeded: the resinous tartness of the coastal forest combines excellently with the spices to create a surprising freshness. A touch of the Baltic Sea that you can taste.

Winter storms are not uncommon on the West Pomeranian Baltic Sea coast. When they have subsided, nature guide Martin Hagemann sets out with his guests on beach tours. "The beach hikes are often referred to as amber hikes, but they're actually beach find hikes," he explains.

Because it's mostly other beautiful things than amber that beachgoers find and take with them - for example, interesting and unusual seashells and chicken gods, so flints are with a hole in the middle.

Martin Hagemann goes with his guests to the Darss at the flushing seam and their eyes wander over the sand. Something sparkles there. Sunlight chases across the beach, spectacularly setting the scene for this wild coast. A piece of green shimmers finely and mysteriously, almost as precious as a gemstone. "This is sea glass," explains Hagemann, who collects it himself, "the most common colors are brown, white and green."

The colors of bottle glass that ends up in the sea and whose shards on sand and gravel are ground round by the waves over decades and get a real patina. Sea glass comes in all colors: red, orange and violet are among the rarest tones. Jewelery has long been made from it, really beautiful pieces with a subtle glitter – and in all colors. If you are very lucky, you might get a red piece that looks like a ruby ​​or a blue one like a sapphire.

Sometimes they are also a piece of history: "I found what was left of a Lysol bottle from the company Schülke und Mayr, which was founded in Hamburg in 1889. It was washed up here on the Baltic Sea beach after more than a century." Martin Hagemann is inspired by such treasures , his guests do the same afterwards. It doesn't always have to be amber.

Information on the Baltic Sea coast in Schleswig-Holstein: ostsee-schleswig-holstein.de; Information about the coast in Mecklenburg-Western Pomerania: auf-nach-mv.de

This article was first published in December 2020.

‹ ›
Keywords:
DeutschlandLänderporträtsRegionenporträtsKaffeeLübeckOstseeRostockRpblAlthagenGroßen Plöner SeeLübecker MarzipanfabrikOliver AbrahamBosauAhrenshoopSaaler BoddenMartin NeumannMartin HagemannNiedereggerWallfahrtskircheRostocker HeideStralsundWarnemündeAltenkrempeOrientSchülkeSusanne BrandtForstReise
Your comment has been forwarded to the administrator for approval.×
Warning! Will constitute a criminal offense, illegal, threatening, offensive, insulting and swearing, derogatory, defamatory, vulgar, pornographic, indecent, personality rights, damaging or similar nature in the nature of all kinds of financial content, legal, criminal and administrative responsibility for the content of the sender member / members are belong.
Related News