Ball out or not? Millimeters decided Germany's elimination

Spain and Japan made it to the round of 16 together in a thriller for the group finals - and ended Germany's dream of the World Cup. 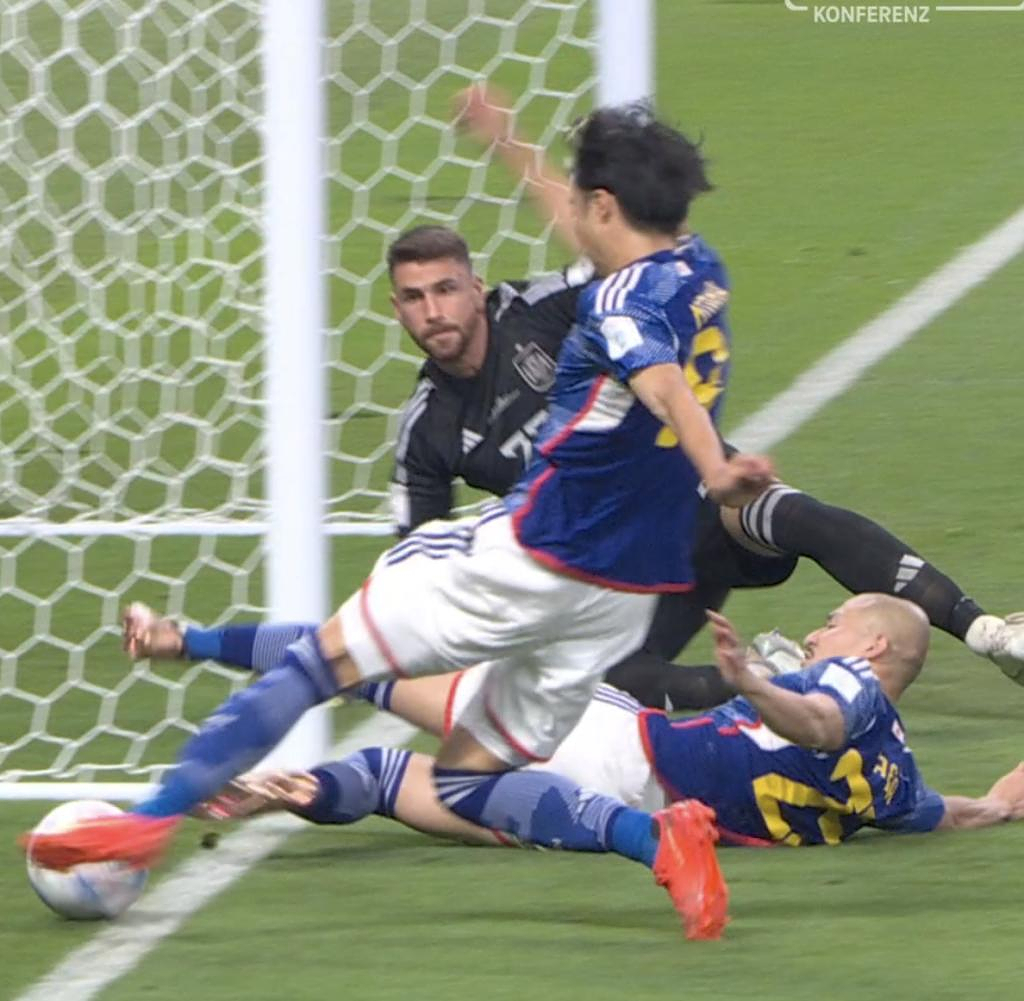 Spain and Japan made it to the round of 16 together in a thriller for the group finals - and ended Germany's dream of the World Cup. After beating Germany at the start, the Japanese celebrated the next 2-1 (0-1) coup against the 2010 world champions and could hardly believe their luck. The underdog now plays Croatia in the first knockout round on Monday. Coach Luis Enrique's Spanish team is challenged by Morocco a day later.

Alvaro Morata, with his third goal of the tournament (11th minute), gave the initially sovereign Spain the lead in front of 44,851 spectators in the Chalifa International Stadium. Joker Ritsu Doan from SC Freiburg managed to equalize (48th), just like against the DFB selection. Shortly thereafter, the jubilation knew no bounds when the Düsseldorf professional Ao Tanaka made it 2-1 (51st).

But this scene was controversial. Kaoru Mitoma had previously scratched the ball from the touchline to the middle. Or was he behind? Referee Victor Gomes from South Africa spent several minutes checking whether the ball had fully crossed the goal line, it was a matter of millimeters. Then the whistle sounded: Goal! Huge cheers broke out in the Japanese camp, the Asians were now suddenly group winners, which was shown in large letters on the stadium display.

And that was perhaps not inconvenient for the Spaniards. As runners-up, they will not meet second-placed Croatia in the round of 16, but Morocco. In addition, they could avoid the big favorites Brazil in the quarter-finals in this way. And it was no longer possible to be eliminated late in the game, the result in the German game was too clear for that.

Costa Rica should have won for this, or Germany should have won by eight goals. A threatening scenario that the DFB-Elf, who were superior in the first half, could have built up, but missed because of a catastrophic exploitation of chances. And so the Spaniards didn't really push for the second goal in added time. A 2-2 would have meant Japan's end, Germany's progress and Spain's group victory.

Japan reached the round of 16 like they did four years ago when they were eliminated by Belgium. "Everyone talks about a miracle, but I don't see it that way. We got more and more aggressive. I had the feeling that Spain didn't attack like that after Germany was 3-2," said match winner Tanaka: "We've never been in the quarter-finals, we want to do that now."

‹ ›
Keywords:
Japan FußballnationalmannschaftDeutschland FußballnationalmannschaftFußball WM 2022Spanien FußballnationalmannschaftMarokkoKroatienLuis EnriqueCosta RicaBelgienSC FreiburgFussballJapanSpanienMatchwinner Tanaka
Your comment has been forwarded to the administrator for approval.×
Warning! Will constitute a criminal offense, illegal, threatening, offensive, insulting and swearing, derogatory, defamatory, vulgar, pornographic, indecent, personality rights, damaging or similar nature in the nature of all kinds of financial content, legal, criminal and administrative responsibility for the content of the sender member / members are belong.
Related News