Austria, in search of stability, ready to reappoint its green president

Supported by a broad spectrum of the political class, he is credited with more than 50% of the votes in the polls and seems well on his way to winning in the first round of voting against six opponents - all men. 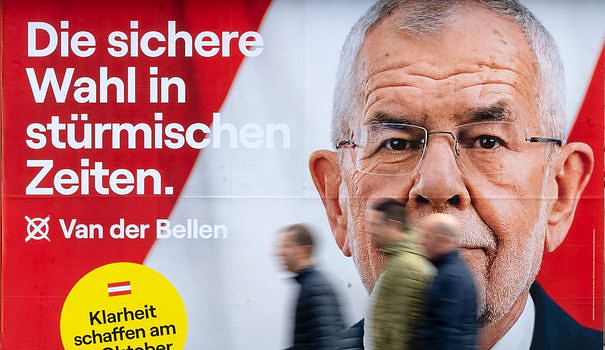 Supported by a broad spectrum of the political class, he is credited with more than 50% of the votes in the polls and seems well on his way to winning in the first round of voting against six opponents - all men.

"The biggest competitor on Sunday will be the sofa," quipped the 78-year-old head of state on Friday at the end of the campaign in front of his supporters. “If liberal democracy is important to you, then go vote,” he added.

The far-right FPÖ party, which almost won against him in 2016, would like to play the match again.

But its candidate is little known: Walter Rosenkranz, 60, would collect only 15% of the vote, against the current of recent elections in Sweden and Italy.

Corruption cases have caused Austria's notorious extreme right to lose ground. Six years ago, she was the first in Europe to come close to victory in a presidential election.

Founded by former Nazis, the FPÖ finally lost with more than 46% of the vote, the epilogue of a ballot with twists and turns that had kept Brussels and Austria's western partners in suspense.

If the party had then acceded to government by forming a coalition with the conservatives of the young Sebastian Kurz, it had to leave power in 2019 after an incredible scandal and has never since regained its past glory.

Faced with these turmoil and the succession of chancellors, Alexander Van der Bellen, with the traditionally embodied function of ensuring protocol, guaranteed the continuity of the state.

He can thus present himself today as "the only one who can avoid chaos", according to political scientist Thomas Hofer, interviewed by AFP.

This pro-European also passes for "integrity" according to Julia Partheymüller, of the University of Vienna, which is "highly appreciated" in comparison with the "multiple crises facing many European countries".

He led a sober campaign, without debate with his rivals, advocating "clarity" and "competence" in order to "cross the turbulence as calmly as possible", in reference to inflation, the war in Ukraine and the crisis. energy.

Message seems to have been received by voters, tired of the political upheavals of recent years.

"I will vote for him because he resolved very well, calmly, the problems that arose for him" during the first term, explains for example to AFP Alexandra Höfenstock, 38, an employee of the city of Vienna. , which aspires to "stability".

In the Alpine country of 9 million inhabitants, 6.4 million voters - including the Austro-American Arnold Schwarzenegger, the president's strong supporter - are called to ballot for a six-year term.

The atypical profile of the outgoing president, however, in no way guaranteed him such a political destiny.

Austere, a little stiff even, agnostic married twice in Catholic land, the former boss of the Greens and dean of the faculty of economics in Vienna has been able to forget his strong anchoring on the left to unite.

Tongue-in-cheek, heavy smoker with an eternal three-day beard, he is now happy to have himself photographed in loden - a traditional alpine jacket - at the foot of the glaciers to convince of his patriotism.

Because an extremely rare environmentalist at the head of a democracy, he is also the son of refugees and has inherited an exotic Batavian surname: his Protestant family emigrated from the Netherlands to Russia in the 18th century.

His father, an aristocrat, and his Estonian mother joined Vienna during the Second World War before moving to Tyrol, fleeing the arrival of the Red Army.