At the trial of Millas, the desire for reconstruction despite the resentment

"I'm waiting for the truth so that we can, all the families, repair ourselves and try to move forward", launched a teenager, aged 14 at the time of the accident, from which he emerged in absolute urgency. 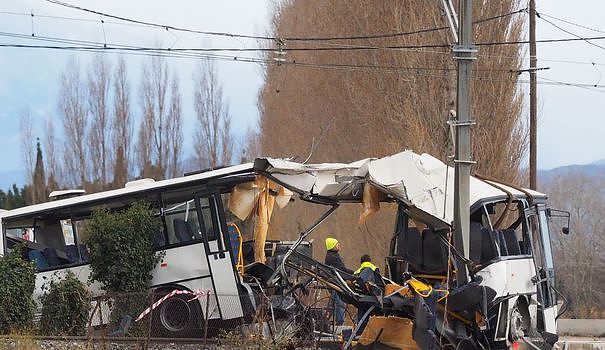 "I'm waiting for the truth so that we can, all the families, repair ourselves and try to move forward", launched a teenager, aged 14 at the time of the accident, from which he emerged in absolute urgency.

Of the seventeen children injured in this collision at a level crossing on December 14, 2017, eight were seriously injured. And six children were killed.

The bus driver, Nadine Oliveira, 53, is the only suspect. Tried since September 19 for homicide and involuntary injuries, she is hospitalized following a malaise on Thursday at the bar and the trial resumed Monday in her absence.

She is also "no longer in intensive care" and "has been transferred to cardiology", said the prosecutor, Michel Sastre. "She is due for an exam tomorrow (Thursday) and could be released on Friday," he added.

"Why me and not them. I feel guilty for being alive. They were comrades, like a second family, from kindergarten to college, we all knew each other," said another teenager, today in college. of English.

But this "fatality", "the friends have nothing to do with it", according to Stéphan Mathieu, the father of Ophélia, who died at 13 in the accident.

"She would be 18 today, her image constantly invades me with pain and suffering. What would be her youth, her hobbies, her ideas. Many questions haunt me," he confessed.

The court released the photos of the children who died during the deposition of their parents, childish faces, a class photo, family photos.

For Enzo, major for a few days, life must take over: "I would have liked him to move forward, to live if I had been dead", he said, evoking the memory of his best friend, who perished in the accident.

"I wish I never woke up until I thought Teddy wouldn't have wanted to or his brother lost his mother too," said the mother of another deceased teenager, who herself even fell into a coma as a result of the accident.

"It can happen to everyone, it happened to us", added the one who had promised herself not to cry at the bar, without success, and who considers that "there is not only only one responsible".

You have to "take back life by transforming the pain", she continued, before addressing her son: "Your friends are there, I tell them Enjoy! Live to the fullest! That's revenge" .

Absent for three days, the bus driver is mentioned in the detour of the testimonies.

"Who are we to blame? Is there a culprit in the story? It's an accident. We all deserve to rebuild ourselves, our families and Mrs. Oliveira," said a young girl who suffered eight months of hospitalization following the collision.

If some express their anger against the defendant, like the mother of Loïc, who died in the accident, who virtually launches "Stop lying! Tell the truth!", Others foresee a possible pardon.

"Nadine Oliveira, I'm not going to say that I excuse her but at the same time, I grant her forgiveness because to err is human," said Enzo's father, trembling.