"It was already not brilliant before, because of the economic crisis that has hit our country since the imposition of sanctions by the United States, but now with the demonstrations our work has been reduced by half", grumbles Mehdi in his T-shirt stall. 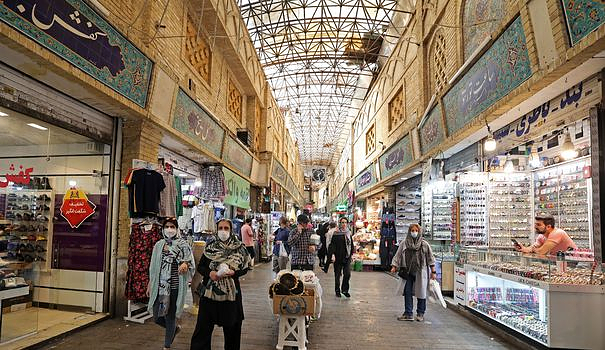 "It was already not brilliant before, because of the economic crisis that has hit our country since the imposition of sanctions by the United States, but now with the demonstrations our work has been reduced by half", grumbles Mehdi in his T-shirt stall.

Sitting on a stool, cap screwed on his head, this 53-year-old trader is sorry: "some customers came in the evening, but they don't come anymore," he says.

During the day, life is normal in this covered market in the north of the Iranian capital.

The stores are filling up and the restaurants are always full. Helmeted riot police stand in front of their motorbikes without intervening.

Cautious, none of the traders interviewed want to comment on the protest movement, which has entered its third week.

It is in the evening that this market is deserted.

"When the troubles start, I have to close the shop four or five hours earlier for security reasons. This is the time when traders lower the curtain of their store and the bazaar empties", explains Mehdi.

After work, after dark, demonstrators take to the streets, burn tires or garbage cans, confront the police or chant anti-government slogans from windows and roofs interspersed with "woman, life, freedom".

The Tajrish market, in the upscale district of the capital, has two busy periods in the morning and late afternoon until 10:00 p.m.

"Before, when it was time for Sarcheraghi ("turning on the lights" in Persian), at sunset, other customers came to shop," says Behzad, who has been selling caps, socks and pants for three decades. .

There are those who go out in the evening to avoid the heat of the day, others who want to take a walk and then the faithful who, after having prayed at the Saleh mausoleum, come to do their evening shopping.

"Because of the protests, people don't go out after 5:00 p.m., especially women. The police did not tell us to close, but the union of our corporation warned us that if we remain open it is at our own risk. and that he took no responsibility in the event of a fire," he said.

According to the Iranian news agency Fars, around 60 people have been killed since the protests began on September 16 and more than 1,200 others have been arrested.

According to NGOs based abroad, more than 90 people have been killed by the repression of the demonstrations.