At the Robert-Debré pediatric hospital, caregivers in overvoltage 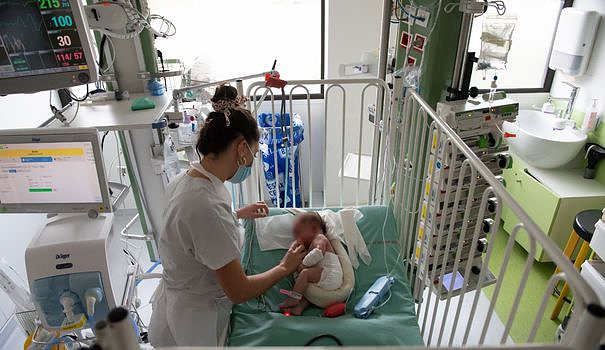 “Last night was terrible,” immediately announces Professor Stéphane Dauger, head of the pediatric intensive care unit. "We had to open two additional beds while we are understaffed nurses."

The calm that reigns in the corridors of the intensive care unit is deceptive. Each of the rooms is occupied by babies and young children, half of whom suffer from bronchiolitis.

The breathing difficulties caused by the disease force them to intubate and stay in intensive care which generally extends from 2 to 4 days. Through the portholes, we can see the silhouettes of the parents watching over the little bodies connected to the monitors.

Amicie de Moncuit was transferred from the Versailles hospital center, which does not have a pediatric intensive care unit, three days earlier to treat her five-month-old daughter.

The effects of the bronchiolitis have subsided and the baby and his mother are due out today. "Relieved" and "very happy with the care", Amicie is one of the patients in western Paris that Robert-Debré was not used to receiving.

Closures or saturation of pediatric services in Ile-de-France, the hospital in eastern Paris is welcoming more and more patients from the west.

This fall, pediatric wards across the country are going through an unprecedented crisis due to staff shortages.

In a letter addressed to Emmanuel Macron, more than 7,000 caregivers denounce the government's "irresponsible political inaction".

The Minister of Health François Braun promised an "immediate action plan" and the release of 150 million euros for "hospital services under tension", but not enough to reduce the discontent.

"This means that there will only be crumbs for pediatrics," fears Professor Dauger.

“Immediate measures are needed, starting with granting bonuses to childcare workers,” adds the doctor, highlighting the very specific skills of pediatric caregivers and their difficulty in being replaced.

Aubeline and Alexandre are the parents of a four-month-old baby boy, hospitalized because of a rare genetic disease. They joined the resuscitation service of "Debré" two months ago and see the workload of the nurses.

"While they are supposed to take care of two children each, they often find themselves with three or even four children in their care. We see that they compensate for the lack of staff by helping each other a lot," they describe. .

"We do a lot of overtime but it can only be temporary, this game of musical chairs is tiring", abounds Nicolas Leclerc, nurse.

As for pediatric emergencies, the situation is no better. Last night, 360 patients were received and 38 were hospitalized in a service which can only accommodate 21, "a record", quips the head of emergencies Luigi Titomanlio.

To cope, the teams pushed the walls. Two beds per room instead of one, patients installed in examination boxes ... "We can always install patients in the corridors but as they are children, we do not like to do that too much", adds he.

Joseph Billet, nursing assistant, agrees: "we've been in degraded mode for months and now we find ourselves in degraded mode of degraded mode, it's getting complicated". He too underlines the difficulties in recruiting personnel and denounces the political inaction. "Nothing changes despite our cries for help," he sighs.

However, despite the exhaustion of the teams, its lack of staff and its daily difficulties, the Robert-Debré hospital is a "last bastion", according to its director Agnès Petit.

But the gradual collapse of pediatric services in the region cannot be fully absorbed and is subjecting the hospital to unprecedented tension. "Robert-Debré is not bad, but he is sick of his environment," she adds.

Next Wednesday, the Pediatrics collective behind the letter to Emmanuel Macron will go to the Elysee Palace to try to deliver it to him personally and reiterate the urgency of the situation.