At the Palais des Sports, the rearguard of Zemmour does not surrender

"How many fights won. 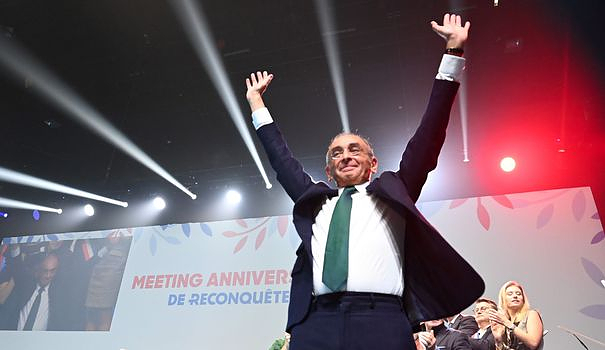 "How many fights won... ideological". The president of the young people of "Generation Z", Stanislas Rigault, heats the hall of the Palais des Sports.

Olivier Ubéda, the director of the meetings, offers his "playlist of the best titles of the presidential election". The hall, all tricolor, regains a little of its campaign fever while waiting for the founder's speech which, promised, will have concluded before the match of the French football team.

"A friend told me earlier: you don't really realize it anymore, but to see 4,000 French people gathered together on a World Cup Sunday, in the middle of the SNCF strike, at 6 degrees outside and outside the electoral campaign, I don't know who else but you can do that," says Eric Zemmour.

The former journalist from Le Figaro, 7.07% in the presidential election after having exceeded 18% in the polls, looks back on his failure. This election, “it was David against Goliath”.

Yes, he sometimes "doubts". But the ideological battle, to listen to her, would be well underway: "who does not know today what the great replacement is?"

After the 13,000 people at the founding meeting of Villepinte at the end of 2021, after the disappointment of the queen election, Reconquest! broke his teeth on the legislative elections: zero deputy, and the founding president fired in the first round in Saint-Tropez, when Marine Le Pen and the National Rally made a historic breakthrough in the Assembly.

The party of 130,000 activists and 500 claimed elected officials, including Marseille senator Stéphane Ravier, has since gone through some turbulence. Figures moved away. Vendée's mentor, Philippe de Villiers, is not present at Porte de Versailles. But the strategy for the future is ready.

"Let's not just congratulate ourselves by telling ourselves that we are the best. Let's work", enacts Eric Zemmour, whose first axis will be to "hold a speech that speaks to the whole right". And this right-wing voter, "he can read books or love cats, it doesn't matter", he smiles in front of a hilarious room with this spade addressed to Marine le Pen.

The boss of Reconquest! hardly mentioned Les Républicains (LR), who nevertheless elect a new president on Sunday. The party does not intend less "to be the spearhead" of the union in the next elections, recalled Vice-President Marion Maréchal, who is already thinking about the European elections.

On the right, therefore. Because "where many hesitate, we indicate the compass without hesitation", explains Mr. Zemmour.

And in particular, for lack of parliamentary existence, by seizing various facts. Demonstration against the Ocean Viking and its migrants welcomed in Toulon, booed by the room; tribute to Samuel Paty; rally after the murder of little Lola: Reconquest, explains its founder, intends to "refuse the invisibilization of crimes", because "the majority of news items are in reality Francocides".

Blame it on "violence in our society", whose "primary driver" is "ethnic heterogeneity". “The more a society is ethnically heterogeneous, the more violent it is,” developed Mr. Zemmour.

A state of mind previously summed up by one of its vice-presidents, Guillaume Peltier: "I am French and I am a patriot. I am even a man and a father. I am white. I am a Christian, I am heterosexual. I live in rural France, I drive on diesel and I heat with fuel oil. And for all this, I have no intention of apologizing".