At the National Rally, the match Bardella against Aliot has started

Catalan farmhouse and country buffet: the troops of Louis Aliot, historical figure of the Lepenist movement since the 1990s, are expected Saturday noon in Braixas (Pyrénées-Orientales), a few kilometers from the town hall of Perpignan conquered two years ago years - unique RN flag planted among the metropolises of more than 100,000 inhabitants. 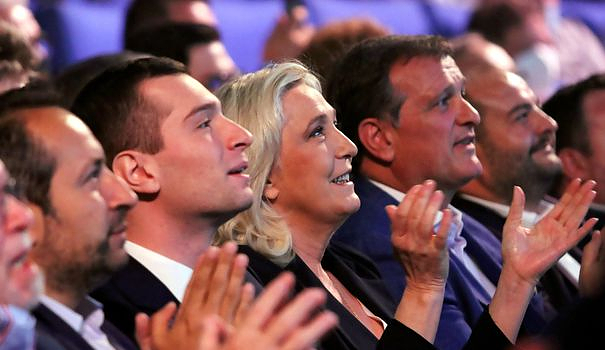 Catalan farmhouse and country buffet: the troops of Louis Aliot, historical figure of the Lepenist movement since the 1990s, are expected Saturday noon in Braixas (Pyrénées-Orientales), a few kilometers from the town hall of Perpignan conquered two years ago years - unique RN flag planted among the metropolises of more than 100,000 inhabitants.

If the poster promises a "political return", it is above all a question for the 52-year-old local baron to launch his campaign for the presidency of the National Rally, a month and a half after a surprise candidacy announcement.

"I still do not understand why Louis Aliot is running ...", sighs a relative of Jordan Bardella, as the one who already occupies - on an interim basis - the chair of the boss of the RN is a favorite, but is now forced to leave the muscles against this determined challenger.

Because, if some initially saw in the initiative of the mayor of Perpignan only a "testimony" all the more welcome as it gave democratic pledges to the ballot, some are now worried that the election escalates. "For the moment, the campaign is good child. For the moment ...", blows one of the 89 deputies elected in June.

First step: collect around 70 sponsorships by September 9, i.e. 20% of an electorate made up of members of the National Council - a kind of party parliament - and departmental delegates from the RN, as well as departmental advisers, parliamentarians and great Lepenist mayors.

"We already have them and we think that in the end, we will have twice as many as necessary", bombs the chest of one of the faithful of Jordan Bardella, certain that his opponent is still looking for some. "Finally, if he lacks some, we will give him some...", commisère the same.

The outgoing Marine Le Pen - who remains president of the group of RN deputies - has decided to stay ahead of two ambitious people whom she considers to be "on (her) political line". But she will come out of her reserve if one says "bad things about the other".

However, behind the scenes, the pleasantries began. On the Aliot side, we highlight the "identity" inclinations of relatives of Bardella, recalling that the twenty-something mentioned without naming it the "theory of the great replacement" in a forum this summer.

"We cannot suspect Louis Aliot of not thinking the same thing as Jordan Bardella on immigration", we quip in the team of the interim president, dismissing the one who began his political career with Jean- Marie Le Pen to her attachment to celebrating the fiftieth anniversary of the National Front next fall, an event deemed cumbersome by the younger generation.

Mr. Bardella's close guard is more annoyed at the mention of presidential ambitions from 2027 who would win their champion in the event of victory in the internal election. “Pathetic and dishonest”, protests a parliamentarian according to whom “Jordan will repeat as many times as necessary that it is not his intention”.

"I am also not sure that these low-level attacks come from Louis Aliot", blows a figure of the party, aiming without naming it "the band of Pas-de-Calais", namely the mayor of Hénin -Baumont Steeve Briois and deputy Bruno Bilde in the lead, relatives of Marine Le Pen worried about the meteoric rise of Mr. Bardella.

By the November 5 congress which will formalize the result after fifteen days of electronic voting open to all up-to-date members, Jordan Bardella must take a tour of the RN federations, after a "media entry" on September 4.

"Jordan has a real connection with the members, but he is also one of the favorite political figures of the French as a whole", praises one of his supporters. "While Louis Aliot, his supporters are ultimately only in Occitania..."