At the Château du Rocher Portail, a Breton Hogwarts that does not say its name

Arriving in front of the superb castle, located about thirty minutes south of Mont-Saint-Michel, four gigantic flags on the roof welcome the visitor, symbolizing as many schools: Fauvedor, Cerfdelune, Boucfleche and Busarde. 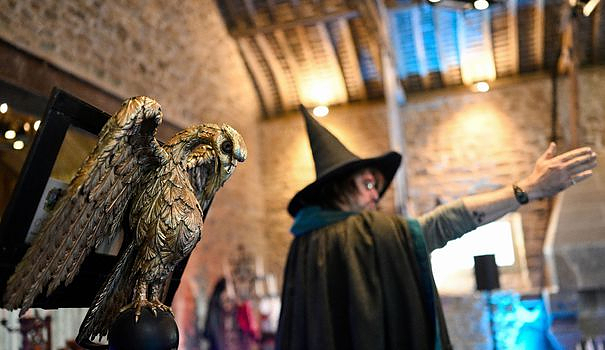 Arriving in front of the superb castle, located about thirty minutes south of Mont-Saint-Michel, four gigantic flags on the roof welcome the visitor, symbolizing as many schools: Fauvedor, Cerfdelune, Boucfleche and Busarde. Difficult, for fans of the saga imagined by J.K. Rowling, not to find a resemblance to the four houses of Hogwarts school: Gryffindor, Ravenclaw, Hufflepuff and Slytherin.

The owner of the castle, Manuel Roussel, who says he receives "every week letters from Warner", holder of the rights to the Harry Potter universe, however denies any direct affiliation with the world of the little wizard with round glasses.

Admittedly, “Ms. Rowling has revived the school of wizards and I am riding this wave”. But "it's really our story and we created our own universe!", explains this energetic 49-year-old man.

"Our lawyers replied to Warner that it was not they who invented the school of wizards: there was My Beloved Witch (American series from the 60s, editor's note) and in History, there are schools of wizards and witchcraft, in addition to Brittany, there are plenty of them!”, he argues, adding that American society had asked him to close.

Contacted, Warner did not respond to AFP's requests.

The squire's lawyer, Me Soazig Themoin, who does not wish to discuss the case, simply indicated that the brand "Rocher Portail the new school of wizards" as well as certain characters, had been registered with the National Institute of Intellectual Property ( Inpi).

"They are being examined before registration with the Inpi," she told AFP.

But what prompted this heritage lover to embark on this adventure? Manuel Roussel, "who learned to walk in front of the castle," bought the listed monument in 2016, which he opened to the public, after the death of the owner.

With 10,000 curious the first year, "we saw that the classic visit was complicated".

After having first surfed on the theme of a French "Downtown Abbey", the entrepreneur decided during the Covid to invest more than one million euros. Objective: to create a "French school of wizards" within the castle built in the early 17th century by Salomon De Bosse, architect of the Luxembourg Palace and the Parliament of Brittany.

Thus, after having paid 28 euros, visitors and children, often disguised with clothes belonging to the Harry Potter universe, discover the magnificent rooms of the castle by carrying out the perfect journey of the little budding magician: duel of spells, preparation of potions, magic trick or workshop to neutralize a spell.

"As children like everything that is wizarding, I found it good. It was a good idea for the All Saints holidays. I did well to take the seats because there are none not a lot", slips Lisa Dubeau, 43, teacher from Finistère.

"It's very well done, we forget to make the link to Harry Potter, we're in it," smiles Céline Rioux, who came with her family from Côtes-d'Armor.

With 13,000 visitors during the holidays and dinners for more than 200 covers at 99 euros, Mr. Roussel, who employs 25 people, qualifies this trial balloon as a "big success".

"Maybe one day we will find an agreement with Warner to do something together! I have big plans," says the squire. In the meantime, in the castle shop, visitors can buy capes, magic wands and... novels from the Harry Potter saga.