At New York Fashion Week, a patriotic show for Ukraine

A regular at New York Fashion Week, where she has been showing since 2017, but based in kyiv, where she was born and has her workshops, she has resolved to leave the Ukrainian capital, the fear, the noises of explosions and the sirens, after the start of the Russian invasion at the end of February, because she wanted to "protect" her two children. 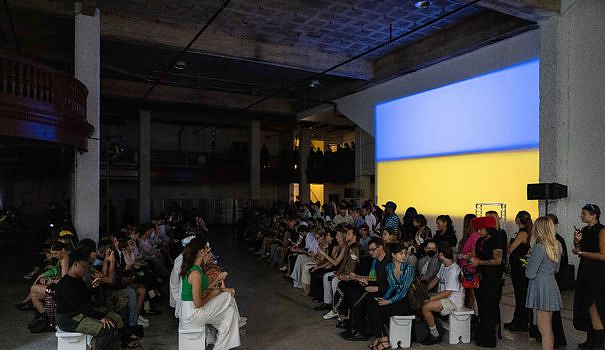 A regular at New York Fashion Week, where she has been showing since 2017, but based in kyiv, where she was born and has her workshops, she has resolved to leave the Ukrainian capital, the fear, the noises of explosions and the sirens, after the start of the Russian invasion at the end of February, because she wanted to "protect" her two children.

Her husband, Volodymyr Omelyan, a politician who was a minister between 2016 and 2019 in the ranks of the Popular Front party, remained in the country and joined the army volunteers. He appears on Svitlana Bevza's Instagram account, military uniform and machine gun in hand.

So, Svitlana Bevza's new spring-summer collection, called "A fragile homeland" and presented in a building on Wall Street, was more political than ever, with the Ukrainian flag projected on the wall.

"Maybe people don't understand that it's for real, but it's been 202 days of war in Ukraine, and there are thousands of dead," says the 40-year-old designer, shoulder-length hair, black and stiff, in an interview with AFP.

"I was forced to leave my country with my children. And my husband is at war," she sums up.

While remaining sensual, certain tops, worn over skirts or trousers, are furiously reminiscent of bulletproof vests. Some take the form of a silver shield leaving bare shoulders and navel.

Above all, it is the grains and ears of wheat - symbols of the "fertile lands" of Ukraine, which have become a geopolitical question and an issue for food in the world - which appeared as the common thread of the collection. A necklace model is inspired by it, but the color is gold and black, to remind that "the Russians burned a lot of our wheat", explains Svitlana Bevza.

Wheat can also be seen in the shapes of the seams or in the fringes. And certain cuts of dresses in silky materials recall how Ukrainian peasant women folded their skirts to be more comfortable in the fields during harvest.

"There is (in Ukraine) a sacred and deep sense of bread and wheat that has gone down the centuries," says Svitlana Bevza, also recalling the terrible famine of the 1930s for which Stalin is singled out by historians.

"What we are protecting today are our fertile lands. And what we are fighting for is to live in peace on our lands," she claims.

Since February, the life of his brand, born in 2006, has been turned upside down as much as his personal life. First of all, the orders for the autumn-winter season had to be delivered from a country at war. Then design a new spring-summer collection.

Svitlana Bevza got down to it from Portugal, where she settled with her children, working remotely with her team who remained in kyiv, where her workshops are.

Dreaming from a very young age, in a Ukraine that was still part of the USSR, of becoming a fashion designer, Svitlana Bevza did not initially think of giving it a political meaning, she who defends a "minimalist", "elegant" fashion, "feminine" and "sustainable".

"It was a big mistake to stay away from politics like that," she says.

Touches of patriotism have appeared throughout its collections, in particular thanks to the Ukrainian revolution of 2014.

"We will win this war," she adds now, adopting a speech without the slightest concession for Russia.

"They have a huge propaganda, and that's a big problem, because they're raising their kids saying Ukraine is some kind of devil. And those kids will grow up. So if you don't do anything with Russia, history will repeat itself in 20 or 30 years”, she assures, adding coldly: “I have no relationship with Russia”.