The police announced in the middle of the day that the number of people killed had risen from seven to nine. 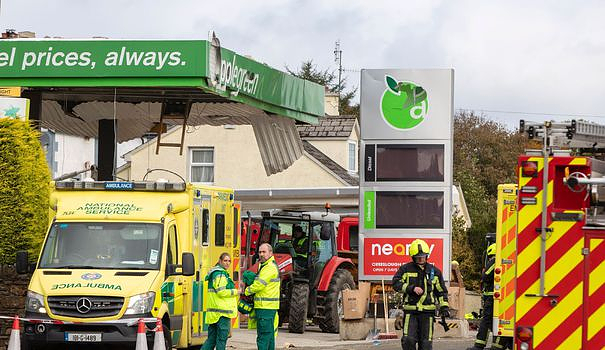 The police announced in the middle of the day that the number of people killed had risen from seven to nine. “The search for other victims continues,” she added. Eight people were hospitalized.

The police, however, did not give an explanation on the origin of this explosion, which occurred Friday afternoon in the village of Creeslough.

An aerial photograph taken after the blast shows the destroyed gas station building. Two two-storey residential buildings behind it collapsed.

Neighborhood resident Kieran Gallagher, whose house is about 150 meters from the scene, said the blast made him think of a 'bomb': "I was at home when I heard an explosion. (…) It was like a bomb,” he told the BBC.

Emergency services worked throughout the night. The rubble continued to be picked up on Saturday.

Irish Police, Fire, Ambulance and Coastguard Services, Northern Ireland Air Ambulance Service and a team of specialists from the British province were on scene on Saturday.

Letterkenny University Hospital, 15 miles from the service station, was placed in an emergency situation and said in a statement it was treating "multiple injuries".

In a statement, Irish Prime Minister Micheal Martin said his "thoughts and prayers (are) today with those who lost their lives and those who were injured in this devastating explosion".

“Island residents will be struck with the same sense of shock and utter devastation as the people of Creeslough at this tragic loss of life,” he said, thanking emergency service members who worked "all night under extremely traumatic circumstances".

Agriculture Minister Charlie McConalogue, who is an elected official from the blast-hit region, compared the scenes of devastation to those of the Northern Irish conflict in the second half of the 20th century. "The scenes from the event are reminiscent of images from The Troubles years ago, in the damage and debris."

For three decades, the conflict in Northern Ireland opposed nationalists, mainly Catholics, in favor of the reunification of the island of Ireland, and loyalists, mainly Protestants, attached to maintaining the province under the British crown. This conflict had caused around 3,500 deaths.

The village of Creelough, which is about fifty kilometers from the border with Northern Ireland, has about 400 inhabitants.

"Our thoughts and prayers are with the families and friends of those who died, those who were injured and the entire community of Creeslough," tweeted Applegreen, which owns the stricken gas station. the blast.