At his trial, Bernard Laporte to the sentence on the charges of conflicts of interest

Faced with the criminal court which has been judging him since Wednesday in Paris, the strong man of the oval had to explain himself at length on the contract of February 2017 under the terms of which 180,000 euros were paid to him in exchange for services for the construction group of Mr. 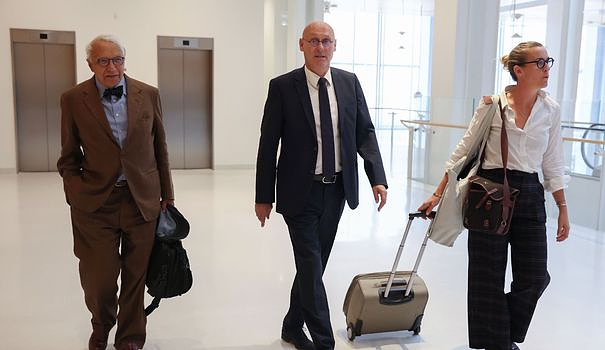 Faced with the criminal court which has been judging him since Wednesday in Paris, the strong man of the oval had to explain himself at length on the contract of February 2017 under the terms of which 180,000 euros were paid to him in exchange for services for the construction group of Mr. Altrad, also president of Montpellier Hérault Rugby (MHR).

No service will be performed and Mr. Altrad will then benefit from a series of favorable arbitrations from the federation: in March 2017, his group becomes the first jersey sponsor of the French XV and, in June, the MHR club sees a sanction disciplinary reduced on appeal after a phone call from Mr. Laporte.

Rose-Marie Hunault, the president of the court, is surprised: did Mr. Laporte not perceive potential conflicts of interest when signing a contract with a club president -- and friend -- then that he has just been elected head of the FFR?

The former coach of the Blues admits not having consulted the legal department of his federation and simply says that he raised the subject with his wife, a tax lawyer.

- "But in the contract, they are not!", Continues the president, who is surprised at the little that Mr. Laporte seems to know about what he had to do for the Altrad group. In particular, aid to the takeover of an English company then coveted by the group and of which Mr. Laporte admitted to the hearing that he knew nothing was mentioned.

"You are not very curious Mr. Laporte! Less than the court in any case", slips the president.

The president plays the ingenuous, apologizes for having "been too long", repeats several times not "knowing anything" about rugby but her mastery of the file puts Mr. Laporte in difficulty.

To defend himself, the leader tries a parade: there can be no conflicts of interest since the Montpellier club depends on the Rugby League and not on the FFR.

Immediate response from the president who points out that the decisions of the League can be canceled by the Federation, which also has a say in the disciplinary sanctions imposed on the clubs of the Top 14.

"We let (the League) manage, except when it goes badly", must recognize Mr. Laporte who seemed more at ease the day before when the court was monopolized by the attacks of the lawyers against the investigation of the national financial prosecutor's office.

The former coach of the Blues also seemed more serene at the start of his interrogation, when the president asked him about his career and his accession to the head of the federation, which he presented as a disinterested gesture for a sport "which gave it all."

In 2016, Mr. Laporte had left his position as coach of RC Toulon to seek, on a voluntary basis, the post of president of the federation with the objective of restoring its luster to the oval.

"Rugby was retreating and was in check," said Mr. Laporte, incriminating the National Rugby League which, according to him, had "taken power".

"This is why I left the professional world, I owe everything to rugby and it was time to commit," he explained, assuming his wish to find a jersey sponsor for the XV of France in order to 'redistribute' the income to the amateur world.

But there again, the president made him waver, in particular by questioning him about the charter of ethics and professional conduct of French rugby of 2015, which the FFR is statutorily responsible for enforcing.

One of its articles calls for "guaranteeing the democratic, transparent and impartial functioning of rugby institutions, in particular by preventing conflicts of interest".

Pressed by Ms. Hunault, Mr. Laporte must admit: he "never read" this charter.

End of trial scheduled for September 22.