At EDF, a crucial race in the reactors to solve the corrosion problem

- "Stress Corrosion" (or SCC), what are we talking about?</p>Stress corrosion is a degradation phenomenon known in the industry which manifests itself by micro-cracks over a few millimeters, not visible to the naked eye. 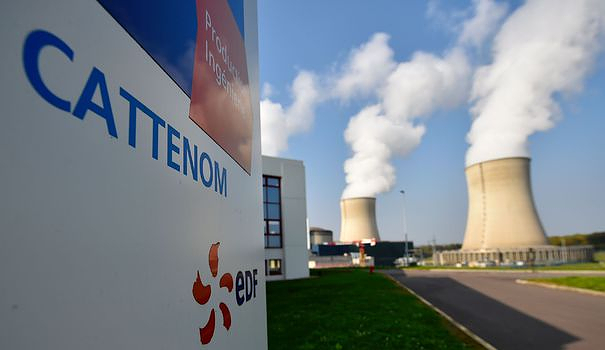 - "Stress Corrosion" (or SCC), what are we talking about?

Stress corrosion is a degradation phenomenon known in the industry which manifests itself by micro-cracks over a few millimeters, not visible to the naked eye.

This phenomenon was detected close to welds on portions of stainless steel piping: the safety injection circuits (RIS), a crucial circuit which sends waterspouts to cool the reactor in the event of an accident - and that of shutdown cooling (RRA), used when the unit is in maintenance. These are auxiliary circuits to the primary circuit, which evacuates the heat given off in the reactor core by circulating pressurized water in these cooling loops.

The problem affects in most cases the most recent reactors (1,300 MW and 1,450 MW), which have longer pipe sections, with more welds, and therefore more fragile.

This corrosion problem forced the reactors to be shut down to check and, if necessary, repair the pipes affected by the cracks.

This has reduced nuclear electricity production to its lowest level in history, in the midst of the energy crisis, and caused billions of euros in losses this year for EDF, whose government has planned to renationalise 100%.

In fact, EDF still had 25 reactors shut down on Tuesday (out of the 56 in the nuclear fleet), due to scheduled maintenance or this corrosion phenomenon.

And the provisional restart schedule continues to be delayed, while EDF wants the maximum number of reactors operating in the depths of winter. A strike in September and October further extended shutdowns.

It's a race against time to reconnect as many reactors as possible and avoid winter cuts: EDF is betting on the restart of 15 reactors in November and December, for a total of 46 reactors connected on January 1.

- How many reactors are affected by this phenomenon?

These faults were identified in October 2021 on reactor 1 at Civaux (Vienne). Other similar problems have been detected elsewhere, leading EDF to control its entire fleet.

More than a year later, the checks show that 40 reactors out of the 56 distributed in 18 power stations are "not very or not at all sensitive to the CCS phenomenon". They will therefore be inspected in 2024-2025 during their scheduled shutdowns for maintenance.

On the other hand, 16 reactors are considered "sensitive or highly sensitive" to the phenomenon, EDF announced on Tuesday. In detail, "10 reactors are being processed and all will be repaired by early 2023". The other 6 will be checked in 2023.

- What is EDF's battle plan?

More than 600 people are mobilized on these repair sites, including a hundred highly qualified welders and pipe fitters from the United States and Canada, called to the rescue to support French teams.

Constrained by radiation exposure limits, the latter were in fact undersized to meet the scale of the task: just on a reactor, a construction site lasts an average of 22 to 23 weeks, Régis Clément said on Tuesday. , deputy general manager of nuclear production at EDF.

EDF wanted to be reassuring about the progress of its inspection and repair programme. “We are really at the peak” of the treatment, summarized Régis Clément. "Today, the situation is quite stabilized, we have emerged from a crisis situation".

EDF carried out a metallurgical expertise program consisting of removing portions of the circuit to check their condition in the laboratory. This required repairs for 13 reactors even when corrosion had not been detected (in three reactors).

From the summer of 2022, EDF has deployed an "improved" non-destructive examination method consisting of checking the metallurgical state by ultrasound, without having to cut the pipes, a crucial time saving. This strategy was validated in July by the Nuclear Safety Authority, and EDF now wishes to include it in 2023 in its current maintenance plan.

Next step: enter a phase of "industrialization" of construction sites. "We are in the process of learning lessons from what we have done in terms of repair which must be the subject of a maximum of copying", according to Mr. Clément.