At Camp des Milles, the memory of "horror" is transmitted 80 years later

For the first time since the Second World War (1939-1945), the names of the 1,933 people deported from Camp des Milles in cattle cars by the French Vichy regime resounded at the foot of the high red brick walls of the former tile factory where they had been piled up in the summer of 1942. 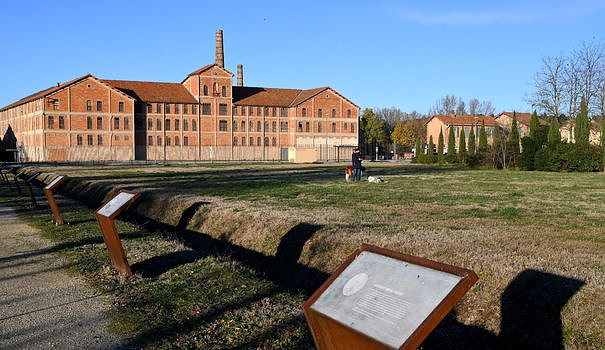 For the first time since the Second World War (1939-1945), the names of the 1,933 people deported from Camp des Milles in cattle cars by the French Vichy regime resounded at the foot of the high red brick walls of the former tile factory where they had been piled up in the summer of 1942.

"I did not think there were camps in France and even less right next to Marseille", tells AFP Tony Cranga, 3rd grade student who came with his class for a guided tour, but also to participate in the reading of the names of the men, women and children murdered by the Nazis in the death camps, close to a wooden wagon where their faces parade.

"There were French people who helped with this deportation and that marked me," said the teenager. "If no one remembers, the kind of atrocities that there were could happen again in the future," he adds.

Between France's defeat by Germany in 1940 and the Liberation in 1944, more than 75,000 Jews were deported to Nazi Germany's extermination camps in Poland, with the active collaboration of the French authorities.

This week, children, railway workers from the SNCF and dozens of other people took part in the commemorations in this place of memory set up 10 years ago and visited each year by nearly 70,000 young people.

"It's been 80 years since the roundups in the southern zone (under the control of the French state of the Vichy regime, editor's note) were implemented", reminds AFP Nicolas Sadoul, director of the camp Foundation. des Milles, from which five convoys left for the extermination camps, first of all Auschwitz-Birkenau.

The purpose of this commemoration is "to remember why and how these 2,000 Jewish people were murdered" as well as the why and how "of the barbaric extremism that culminated in these assassinations which also sheds light on the risk that the extremisms of today weigh on our country and our democratic societies", added Mr. Sadoul.

Exhibitions and educational spaces have been designed to show the mechanisms that tip a society towards totalitarianism and mass crimes.

Other rooms in the old tile factory, abandoned in the 1980s, have been left as they are to show the extreme precariousness and harshness of the detention of people rounded up, such as the dormitory in the attic reserved for women and to the children from where the loading docks for the extermination camps were visible.

"It is everyone's duty not to allow the vile thoughts and ideologies of anti-Semitism, xenophobia, hatred of the other to germinate," said Thursday evening Herbert Traube, deported from Les Milles who survived in prison. escaping from a convoy before joining the Resistance.

This 98-year-old man came to testify in front of a vintage wooden wagon, in front of which were read the testimonies of survivors or Righteous, those who saved Jews during the war.

Invoking a "duty of memory" Mr. Traube recalled the importance of "raising awareness among young and old about what happened at that time to prevent it from happening again".

This "place of raw horror" where humans "were hunted down, humiliated, starved, beaten, thrown into cattle cars, herded to death and dehumanized" has also become a "living place of memory by and for young people of today and tomorrow", claimed the director of research emeritus at the CNRS and president of the Camp des Milles Foundation Alain Chouraqui.

For Nicolas Sadoul, this "generational transmission must not stop today, a fortiori when the great witnesses disappear".