The pharmaceutical company will sign an agreement with the Valle de Hebrón Institute of Oncology to launch the José Baselga Innovative Disruption Program, in honor of the late oncologist. 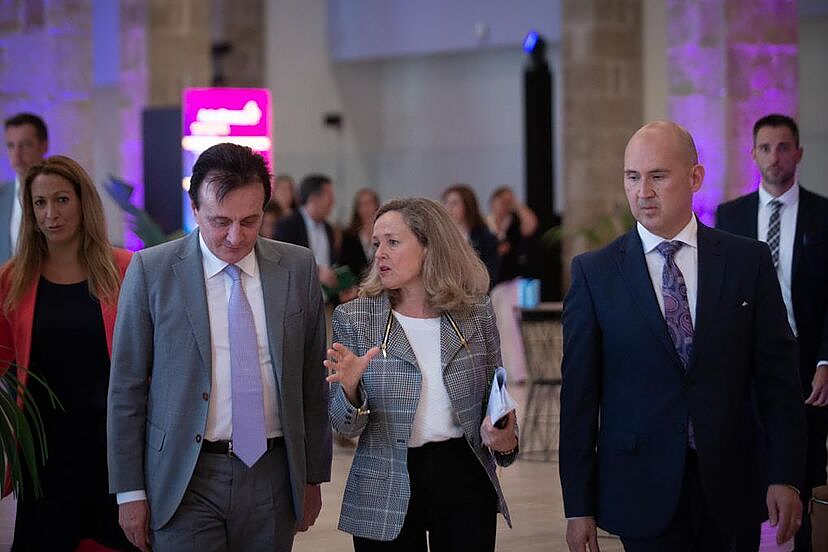 The pharmaceutical company will sign an agreement with the Valle de Hebrón Institute of Oncology to launch the José Baselga Innovative Disruption Program, in honor of the late oncologist.

Perhaps the most talented young scientists from one of the best cancer research centers in Spain will have an opportunity to develop their careers in Spain, and not in the US, UK or Germany, like many of their colleagues. This same week, all eyes were on the meeting between the economic vice president, Nadia Calviño, and the president of the Generalitat, Pere Aragonès, which would take place this Monday in Barcelona, ​​at a conference organized by the pharmaceutical company AstraZeneca to honor the figure of the late oncologist Josep Baselga, father of the new treatments for breast cancer and the concept of translational research, and in which the two politicians would have to meet despite the current tensions between the central and Catalan governments. Calviño was already preparing the meeting in the morning: "Relations (with the Government) are in a state of normality and maximum cordiality," he said, explaining that he planned to greet the regional president and his Minister of Economy, Jaume Giró, at the AstraZeneca event .

However, the coincidence in the act of the two politicians has been far from ending, finally subtracting prominence from the announcement that took place during the act, held in Barcelona. The pharmaceutical company has announced -and signed this Wednesday- an investment of 6 million euros for the creation, together with the Valle de Hebrón Institute of Oncology (VHIO), of a research talent retention program to strengthen preclinical and translational research.

The innovation program, named José Baselga Innovative Disruption Program, in honor of an oncologist who died last March of a rare disease and who had led both the oncology area of ​​the pharmaceutical company and the VHIO, aspires to further strengthen the Spanish position in world cancer research and the leading role that the Catalan research enclave already had for the British pharmaceutical company. "We are determined to continue intensifying our commitment to Spain and Catalonia as strategic enclaves for their formidable biomedical ecosystem, which is becoming one of the great engines of our company at a global level", said the CEO of AstraZeneca in Spain, Rick Suarez.

For his part, the director of the VHIO, Dr. Josep Tabernero, has assured that "thanks to this collaboration agreement, we hope to be able to favor the talent of other researchers with disruptive approaches with the aim of achieving more effective and individualized treatments for patients. cancers, especially in those cases that do not respond to standard therapies.

Putting figures to this bet, Suárez has detailed that "last year we invested more than 93 million euros here and we currently have 326 clinical trials underway in Spain, of which 64 began this year. That places us in the first place of all the European subsidiaries and the second world level" in investment in investment in research, only behind the United States.

The new José Baselga innovation program "in alliance with the Valle Hebrón Hospital will be a public-private collaboration to promote cancer research that will be focused on personalized medicine, seeking the new generation of treatments and, more importantly, talent. With it, we want to honor the memory of Dr. Baselga, who was not only a fantastic scientist and a very humane doctor, but also a fantastic leader and seeker of new talent", detailed the company's global CEO, Pascal Soriot at the ceremony. Barcelona, ​​which was also attended by the former Minister of Health Salvador Illa.

The President of the Generalitat, Pere Aragonés, has added the new program "which promotes this joint venture between AstraZeneca and the Hebrón Valley Oncology Institute will achieve important advances in the field of preclinical research in oncology and will also be one of the best tributes that can be done to Dr. Baselga, because it will allow us to add energy, talent, professionalism and resources, which is how the best results are achieved". Aragonés has also highlighted "the global hub for research on rare diseases that will provide a qualitative leap in this very important field".

Vice President Calviño went a step further in the meeting, recalling that access to new treatments also depends to a large extent on this strong position in research. "The fact that Spain is the second country in terms of cancer research, the first in Europe, that AstraZeneca has made such a clear commitment to our country with a 20% increase in its employees, the disease research hub rare here in Barcelona, ​​the consortium with the Valle de Hebrón Institute, the commitment also to an innovation hub in Madrid to provide digital solutions to help patients... What it does is confirm that our country has an extraordinary ecosystem , institutional and human in order to continue being a benchmark in research".

And this is especially important, the vice-president stressed, at a time like the present when European Next Generation funds and the Vanguard Health PERTE are available, which aspire to mobilize public and private efforts, "precisely to ensure that that in the future the National Health System will be able to continue financing these personalized treatments that are increasingly expensive, increasingly sophisticated, so that we can develop them together in public-private collaboration, so that the entire population has access to these treatments Vanguard".

‹ ›
Keywords:
EmpresasindustriaSaludSociedadCataluña
Your comment has been forwarded to the administrator for approval.×
Warning! Will constitute a criminal offense, illegal, threatening, offensive, insulting and swearing, derogatory, defamatory, vulgar, pornographic, indecent, personality rights, damaging or similar nature in the nature of all kinds of financial content, legal, criminal and administrative responsibility for the content of the sender member / members are belong.
Related News