Assembly: first turbulence for the RN in the hemicycle

During questions to the government, it was the deputy RN Alexandre Loubet who launched hostilities in the hemicycle by accusing the executive of "selling off to foreign interests" French "industrial flagships". 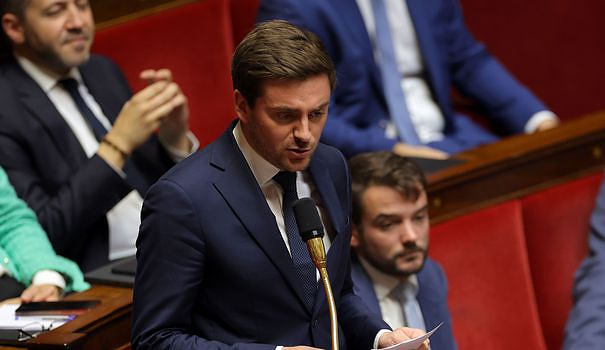 During questions to the government, it was the deputy RN Alexandre Loubet who launched hostilities in the hemicycle by accusing the executive of "selling off to foreign interests" French "industrial flagships". In his viewfinder, the possible takeover by an American group of the electronics company Exxelia, in the Moselle department where he has been elected since June.

“When will you stop betraying the interests of France?”, he first launched to Bruno Le Maire.

"There was a time when you worked for Dominique de Villepin, who denounced the cowardice of those who refuse to defend the interests of France: today, the coward is you", he thundered a a little later, in an allusion to a 2006 skirmish between Mr. de Villepin, then Prime Minister, and François Hollande, at the time leader of the opposition.

Bruno Le Maire immediately raised his voice: "I have the honor to request a solemn apology from the National Rally for having used the term coward".

“Excuses, excuses”, then added the minister off the microphone.

The deputies of the RN then left the hemicycle for a time.

In front of the press, their boss Marine Le Pen castigated the "threatening posture" of Bruno Le Maire: "We do not threaten, we do not point the finger at deputies when you are a minister. If he is not able to keep his cool, let him go and plant strawberries,” she concluded to the applause of her white-hot troops.

On their return to the session, the President of the Assembly Yaël Braun-Pivet deplored the "insult" uttered by Alexandre Loubet and inflicted on him a call to order with entry in the minutes, which deprives the RN deputy of quarter of his parliamentary allowance for one month.

This sanction "does not exempt you from apologizing to the minister", she added.

But the agitation resumed even more when the elected RN of Var Frédéric Boccaletti, after a question on "the entryism of radical Islamism at school", accused the Minister of Education Pap Ndiaye "of 'to be a communitarian himself'.

New boos. "You're starting again, it's still incredible, can't we respect each other here?", pestered the holder of the perch, before inflicting a call to order, to the applause of the other benches .

The two sanctioned Alexandre Loubet and Frédéric Boccaletti then exchanged a handshake with a smile.

“Communitarianism is in no way an insult, it is the development of a political idea”, she pleaded. And to note: "we have been treated for weeks as fascists, Nazis, Pétainists without ever once, a single deputy being the subject of any call to order".

The session continued in the same vein. Before the vote on the unemployment insurance reform, Renaissance MP Astrid Panosyan-Bouvet denounced the "50-year-old xenophobic DNA" of the RN. And was in turn given a call to order by the president.

Since the unprecedented election of 89 deputies, the RN had hitherto played the notabilisation card. Ties, these parliamentarians willingly present themselves in "constructive opposition" and seek to distinguish themselves from the "agitation" of LFI.

The RN had promised to raise its voice this fall against "social damage" or "migratory submersion".

In the morning, during a point with the journalists, the deputy Jean-Philippe Tanguy had for his part ostensibly removed the European flag from the platform of the press conference room of the Assembly, to leave only the flag French. It is a "fundamental" of the RN, he had justified.